The name Michael Zorc, to the majority of young football enthusiasts, might be synonymous with the best Sporting Director in world football. Zorc has been the Director of Football at Borussia Dortmund from well before the Jürgen Klopp era. He was instrumental in bringing the likes of Ousmane Dembélé, Shinji Kagawa and Robert Lewandowski to Signal Iduna Park, among others.

The role of a sporting director runs far deeper than just scouting and signing players – they must also look after the overall philosophy of the club from the first team right down to the youth setup. When it came to the appointment of the Sporting Director at Dortmund, who better to look after them than one of their own?

The young defensive midfielder started out at TuS Eving-Lindenhost in 1969, aged 7. His affiliation with Dortmund began when he was 16, joining their under-19 squad, proving week in, week out that he was ready for the big time. After winning the UEFA European Under-18 Championship in May 1981 and the FIFA World Youth Championship in October, Zorc was handed his club debut later that month, replacing Bernd Klotz in the second half. Unfortunately, Zorc’s debut ended in a 2-0 defeat to Werder Bremen. Zorc went on to start 8 more times in his debut season with Dortmund finishing 5th in the table, 7 points off then champions Hamburg. Zorc became a first-team regular the following season, bagging his first assist for the club in an 11-1 drubbing of Arminia Bielefeld in early November.

However, Zorc had to wait for his first goal until late January, when Dortmund faced Stuttgart. Dortmund found themselves trailing after the first half but, Zorc slotted one past Helmut Roleder to bring them level. Although Dortmund went on to lose after conceding late on, Zorc’s goal was the first of many.

Just a week later, when Dortmund hosted Hertha Berlin, Thomas Remark canceled out Burgsmüller’s goal in the 22nd minute, prompting Zorc to grab the game by the scruff of the neck in search of the goal that would put his side back ahead. He found himself in advanced positions, leaving Meinolf Koch in front of the back three. Finally,  Zorc came up clutch and scored in the winner with just 4 minutes left to play. His reaction to conceding, especially at his young age, was commended by his peers.

Injuries kept him out of the team for about half the season, which he ended with 5 goals to his name. Starting with the 1985/86 season, however, Zorc made that midfield position his own as he started all 34 games and got into double figures with 10 goals for the season. He proved time and again that despite being a defensive midfielder, you can find the back of the net if you are offensive on the counter. Even though most of his goals came in the form of spot-kicks, he had his fair share of goals from outside the box as well.

Zorc’s first testament came during the 87/88 season with Dortmund fighting relegation. Their highest position all season was 9th a spot they occupied for just one matchday. Zorc scored 4 times in the first 10 games before an injury sidelined him for 5 months. He returned to a Dortmund side which had won 3 of its 12 games played in his absence. After being eased into the playing 11, Zorc scored 9 times in 7 games, including 4 in a game against KFC Uerdingen 05, to breathe life into his side in their bid for survival.

His fervent desire to play and top-notch attitude he showed in training and on the pitch unsurprisingly made him a fan favorite. The very next season, Dortmund won the DFB-Pokal against a strong Werder Bremen side. Zorc scored in every game that he played in except for the final where he assisted Frank Mill for the second of four goals scored by the side that day. This was the first time that Zorc was given the captain’s armband over Mill by the manager Horst Köppel. Frank Mill was given the armband by Reinhard Saftig during the 1987/88 season, and Köppel did not see a need to change things up until he witnessed Zorc on the field.

Some 43,000 fans witnessed Zorc don the captain’s armband at the Ruhrstadion, as he lead out the Dortmund team away at SG Wattenscheid. It was almost a perfect outing as captain, as Zorc picked up his first goal of the season before Frank Hartmann pulled it back for the hosts in the 80th minute. Thus, Michael Zorc’s first official game as captain ended in a draw. However, Zorc’s next outing as captain was one to forget as Stuttgart put 7 past Dortmund without reply. This loss sent Dortmund into a 14-game winless streak that saw them finish 12th. Zorc suffered a lengthy injury lay-off, one from which he did not return until February of the following season.

On his return from injury, he was officially given the captain’s armband by manager Ottmar Hitzfeld. Zorc was one of Hitzfeld’s most indispensable players over his 6-year stint at the club. Zorc ended the season with 6 goals and 2 assists after his return from 14 appearances, leading his team to the third spot in the league. The 92/93 season under Hitzfield saw Dortmund retain the third spot, as Zorc racked up 10 goals and 5 assists.

The 1994/95 season was one to remember for the German as he scored his 100th Bundesliga goal for his club, albeit in a tiresome 3-3 draw away at Bökelberg. Dortmund started the campaign on a strong note, shuffling between the first two places in the table, with just one loss in the first 19 games. They still found themselves on the top of the table after a flurry of mediocre results, but eventually dropped to second place after 3-1 loss away to Bremen, which saw them take pole position.

Dortmund found themselves in a tough spot with just 5 games left. Every game was now a must-win, with an eye on Bremen’s results as well. Zorc scored in 3 of their next 4 games, but Dortmund still found themselves 2 points behind Werder Bremen in second place heading into the final day. Dortmund faced Hamburger SV at home and Bremen traveled to the Olympiastadion in Munich. The equation was clear – Dortmund needed a win and had to rely on Bayern to get the better of Bremen.

At half-time, Dortmund put two past Hamburger SV and sat on provisional pole, with Bayern leading Bremen by a goal. At the sound of the final whistle, the Dortmund players frantically look towards the bench, where they see the staff punching the air in celebration of their 4th ever Bundesliga title, their first in 31 years. Hitzfeld embraced his players as they lined up to collect the gleaming Meisterschale. Susi is handed the title, which he lifts high for the crowd to see, and the rest lift Zorc, their top scorer, their hero, for everyone to see.

Zorc emulated his goal tally from the previous season, scoring another 15 goals, as did Dortmund clinching their second title on the bounce, this time by a comfortable 6-point margin. Zorc lifted the Bundesliga trophy for the second year running, but this was still not the highest point in his career. 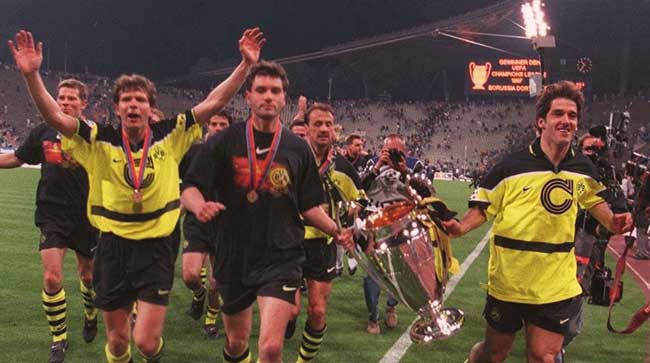 The 1996/97 Bundesliga was a two-horse race between Bayern Munich and Bayer Leverkusen. A series of 4 losses in 7 games dropped Dortmund from the top of the table to 4th place. The reason their performance dipped in the Bundesliga was that Hitzfeld prioritised the continental success on the back of their domestic triumphs. However, Zorc’s involvement in Dortmund’s bid for Champions League glory was limited due to his advancing age, as he played a total of 41 minutes in the entire knockout stage of the competition, before coming on as an 89th-minute substitute in the final. Hitzfeld later revealed that he wanted Zorc to be on the pitch when the final whistle blew.

Hitzfeld left Dortmund at the end of the season to be replaced by Nevio Scala. The change of manager brought in a new style of football to Dortmund. Scala favored the 3-5-2 formation with the midfielders having the freedom to move further up the pitch, perhaps diminishing the role of the holding midfielder. Now 36, Zorc was not favourite to start in most games, making appearances off the bench, and sometimes being left out altogether by Scala. After starting just 4 games in the 97/98 season, Zorc decided to call it a day and retired, only to return to Dortmund as a Sporting Director years later.

Zorc has been a Dortmund legend as a player and a man and has arguably been more influential for the club off the pitch. But as he explains, the sporting director’s responsibility is simply far more than simply convincing players to sign on the dotted line.

“I discuss the style of play with the coach, and the youth teams will follow that. But for our fans, it has to be daring and attacking. The CEO handles the budget you have, but as well as buying, selling and extending players’ contracts, I’m also someone they can talk to besides the coach. I’m always with the team during matches. I attend all training sessions and will often even eat with the players so they know someone from the club is looking out for them.”  This kind of commitment can only be shown to something that people are passionate about, and football and Dortmund are surely two things that Captain Susi holds dearest to his heart.