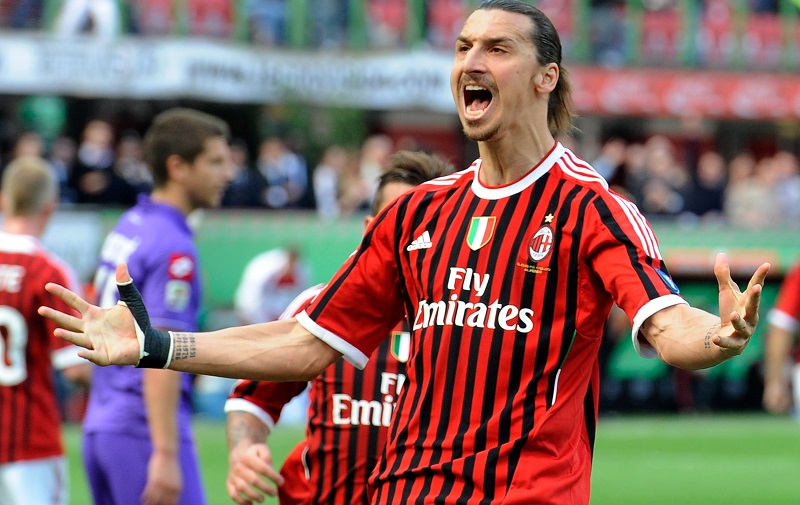 Every sport needs a bad guy, Someone you love to hate. A figure that embodies the antithesis of the beautiful game. That man was Zlatan Ibrahimović.  For the better part of the last twenty years, the Swede’s nefarious attitude, narcissism, and moxie were justified by his performance on the pitch. With over 500 goals for country and a litany of clubs, Zlatan has seemingly conquered it all. From hustling the mean streets of Malmo to silencing the most hopeful of opposition fans, Ibra’s career has set itself up for a rousing finish. His decision to join a faltering AC Milan has bookended that epilogue to end not with a bang, but with a whimper. Many point to Ibra’s first stint with Milan as the beginning of the Zlatannaisance. Surrounded by the experienced heads of, Alessandro Nesta, Clarence Seedorf, Marco van Bommel, Genaro Gattuso and then starlets like Stephan El Sharaawy, Thiago Silva,  and Alexandre Pato, It was Ibra who took the bull by the horns, he was the Rossoneri’s Matador. The alpha who led Milan to their first Serie A title in six years, wrestling it back from bitter rivals Inter.  It was the last high point in AC Milan’s history. He now enters their worst.

A Point of Pride

This Milan side is not the pride of Lions they once were. They’re not even hyenas. I’m not sure even AC Milan know what they are anymore. One false dawn after another has relegated the giants of Italy to relative obscurity. People don’t seem to care about them anymore. That, more than anything is why Ibra has returned. Speaking on his move, Ibra said; “I’m coming back to a club I hugely respect and to the city of Milan I love. I’ll fight together with my teammates to change the course of this season. I will do everything to make it happen.” For once in his career perhaps, Ibrahimovic is here for the consequence, not for the trophies. He has a challenge ahead of him which can put an ounce of humanity back to his anti-heroic personality. The perennial trophy hunter has won silverware aplenty, but perhaps it’s time for him to achieve something different.

Before Ibra arrived on loan from Barcelona in 2010, Milan had scraped into the UCL spots and were 12 points adrift from leaders Inter. Nearly a decade on, they’re 11th and a staggering 21 points behind their cross-town rivals, who sit at the top of the Serie A table. The difference here is that the Swede is not tasked with transforming Milan into Italian champions once again, far from it – his job is to prepare the next pride, arresting their steep decline and putting them back on track. This is not the first time he has done this either. During his surprising stint at Manchester United, Zlatan shed a positive influence on United’s most rampant young colts. For Anthony Martial, the bitter taste of losing his number 9 to an aging forward was a hard pill to swallow. It turned out to be a minor hassle in the grand scheme of things, as the Swede’s presence bolstered the striker’s development who needed an experienced hand.

“He is a top player and we cannot help but learn from just being alongside him, playing and training with him, seeing what he is doing now and what he has done in the past. . . In spite of his age, he has been a tremendous help to our side; he is doing loads for us.” – Martial when asked about Ibra’s influence. Moreover, his presence had an even more significant effect on United’s leading goalscorer—Marcus Rashford— who needed a role model at a very decisive stage in his development. When speaking with James Ducker in the Telegraph: Marcus Rashford, rather prophetically claimed; “You will see the benefits in years to come. What I have learnt from him is irreplaceable.”

A Model of Achievement

Often maligned for his self-inflated sense of importance, Ibra has a track record of walking the walk. He’ll talk a big game and perform an even bigger one and laugh when people actually seem surprised. It was the sort of dangerous bravado that Milan was known for, and one that they must seek again. Ibra’s Swedish compatriot and current Sampdoria star, Albin Ekdal emphasized the striker’s ability to make a difference. He told Il Secolo XIX.

Definitely, for two reasons. One, he is an exemplary professional who always trains to the maximum, so he is always at his peak physically. “Two, with him on the pitch, everybody plays better because nobody is brave enough to disappoint him. “Nobody wants to disappoint Ibra – anybody who has played with him knows what I mean. Before resigning, Gattuso requested experienced players, but the club hierarchy did not meet his plea; resulting in a squad that is bereft of any discernible leadership. Zlatan is one of the very few players who possess an elite mentality, he made players like Nocerino perform far beyond their capabilities – further proving his presence is much needed, especially during a time where younger players like Rafael Leao can thrive under his tutelage

The Home Cellar for a Fine Wine

The lady’s boot has often been a place where stalwarts come to extend their careers and punch above their weight in their old age. Antonio Di Natale, Luca Toni, Fabio Quagliarella and Cristiano Ronaldo, are only a handful of examples. Zlatan, now pushing 40, might still have a shot of extending his already lengthened range. He’s had his best years in Italy, playing and winning scudetti with the big three. He knows what it takes to instill the winning mentality back into the club – something which AC Milan desperately desire.  “Italy is my second home, Ibra admitted in an interview with La Gazzetta dello Sport.  I will listen to all offers, but I want to fight for the maximum target. If I were to come back, I’d want to challenge for the Scudetto, not just be signed by someone because I am Ibrahimović. . . I can still make a difference. I’m not a zoo animal to be put on display for people to see. I can still get 20 goals in Serie A.” Betting on yourself will provide the sweetest return. With a 20-year old career winding down, AC Milan would be smart to turn the bottle on its head and taken in the last draught of vintage that is left in the Swede.  The jungle is not quiet and the lion is not ready to sleep. With Ibrahimović back at Milan, he only reinforces that hard work pays off, dreams come true, bad times don’t last, but bad guys do.