Romanticism and realism are two sides of the same coin that cloud the judgment of any zealous fanbase witnessing their club in the midst of a footballing fairytale. While their team’s unanticipated overachievements prompt them to dare to dream, pragmaticism takes precedent as they realize that this only puts their beloved players on the radar for superclubs to swoop in for their signatures. Such has been the dilemma for mere admirers as well as ardent supporters of Ajax this season.

With an exquisite domestic double and a dream semi-final run in the Champions League which saw Ajax making Europe’s elite look like novices along the way, the romanticism towards de Godenzonen’s class of ’19 will not leave a sour taste in the mouths of any Ajax supporters; despite their gut-wrenching exit at the hands of Tottenham Hotspur.

However, realism set in during January when Frenkie De Jong’s 75-million-pound move to Barcelona was set in stone. They had to witness the prodigious midfielder shine in the middle of the park for the remainder of the campaign with somewhat of a heavy heart. In a similar vein to De Jong, Ajax will have to bid farewell to several of their superstars in the summer.

One of them is Moroccan ace, Hakim Ziyech who has been confirmed to depart the Johan Cruyff Arena by Ajax’s director of football, Marc Overmars. Named as Ajax’s Player of the Year for two seasons on the bounce since his arrival in 2016, Ziyech has one of the biggest bargains in the history of the club at just 11 million euros. With a release clause of a mere 25 million pounds and 38 goal contributions (22 goals and 16 assists) to his name this season, the former Twente man could once again be an absolute snip for a mirage of Europe’s top clubs this summer.

After a massive 850-million-pound investment into the brand new ‘Tottenham Hotspur Stadium’, Spurs are in deep water due to amassing a debt of 637 million pounds. In strictly frugal terms, Ziyech’s signing at just 25 million pounds represents a brilliant proposition for Daniel Levy’s stringent spending habits.

Looking at the North Londoners’ current options on the wings, only Lucas Moura and Son Heung-Min are naturally inclined to operate out wide. While Dele Alli and Christian Eriksen have previously been deployed on the flanks, they tend to drift inside to pull strings. For a side that aims to compete on four fronts, it is imperative to focus on bolstering the depth of the squad by ensuring that players of the stature of Ziyech sign on the dotted line and provide stiff competition to the established figures of the team.

Due to the absence of genuine wide talent, Pochettino has often had to cater to a 4-4-2 diamond setup which has worked wonders at times, however, it can prove to be extremely narrow and as a result, Spurs have struggled to unlock rigid defences on several occasions this campaign. 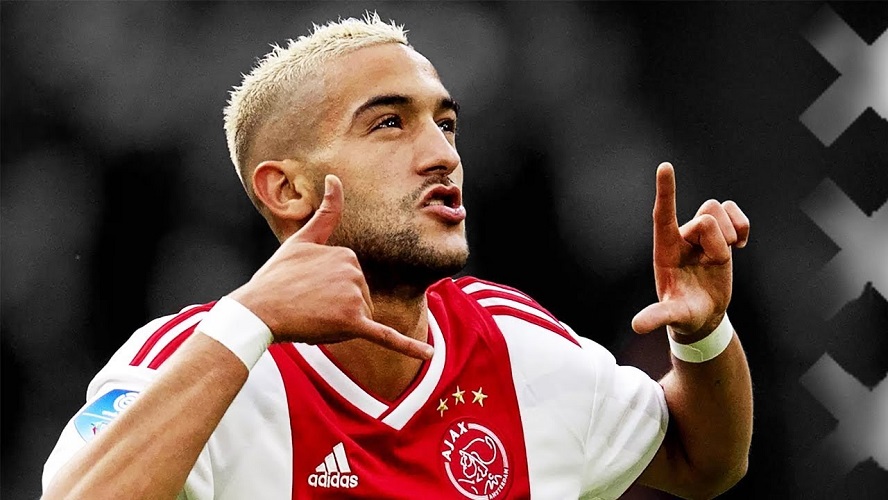 Tactically, Ziyech’s signing allows Pochettino to set his side up in his preferred 4-2-3-1 formation as the Moroccan can function as an inverted winger on the right flank, providing a significant upgrade to Moura while freeing up Son to perform the same duties in his natural position on the opposite wing.

However, it is the culmination of his technical mastery and defensive doggedness that makes Ziyech an ideal fit for Pochettino’s vision. Ironically, the perfect example of his abilities as a complete forward was his performance against Tottenham in the first-leg of the Champions League semi-final.

Ziyech’s deftness was on show as he threaded through an immaculate assist for Donny van de Beek’s winner, however, it was his magnificent defensive output that proved crucial to Ajax’s compactness away from home. Racking up 5 ball recoveries and winning 100% of his tackles (6) on the pitch, the ex-Heerenveen winger was a vital cog in his side’s high pressing system, similar to Pochettino’s philosophy.

Reaching a Champions League final and securing top four has been no mean feat for a Spurs side competing with the multimillion-pound investments of its competitors, however, there does lie a sense of this campaign being a miracle of some sorts. In order to establish themselves as staple competitors for the highest honors, the coup of Ziyech would be a spectacular starting point.

As the iconic Robbery duo of Arjen Robben and Franck Ribery reached the end of the road in Bavaria after a decade of trophy-laden dominance, Bayern Munich are in serious need of reinforcements. Persistent injuries and inconsistencies in form from the pair have brought about the meteoric rise of Serge Gnabry. The 23-year old has taken major strides after taking on the mantel as the first-choice winger, scoring an impressive 13 goals and 6 assists this season. However, this has been the German international’s first season as a starter and the Bundesliga champions must dip into the transfer market to add some venom to their attack.

At 26 years of age, Ziyech is at the peak of his powers and has delivered time and again in the business end of the Champions League. Naturally left-footed, the pacey forward is a like-for-like Robben replacement. Much like the Dutchman, Ziyech has the tendency to cut inside onto his preferred foot and go for goal, taking 5.1 shots per match. Ziyech’s fierce strikes against De Graafschap and Feyenoord in the Eredivisie are a clear indicator of his exceptional long-range abilities.

While Gnabry is the centerpiece to Bayern’s plans in the future, Ziyech is a readymade big game player who has dismantled European stalwarts in the knockout stages of the Champions League. With 3 goals and 2 assists against the likes of Juventus, Real Madrid and Tottenham, the Moroccan international looked a cut above the rest. Ziyech presents a terrific option for Bayern at a cut-price of 25 million pounds which is ideal for a club that model their transfer policy on investing smartly. His acquisition would be a win-win situation for a club in need of a revamp and a player in need of the chance to sparkle at the top of the tree of club football.

Traditionally, Arsenal have shied away from splashing the cash in the transfer market and have instead placed their emphasis on their state-of-the-art academy structure as well as accruing diamonds in the rough that prove their potential as shrewd acquisitions over time. Whether this is due to straying away from the norm of the enormous spending spree of its counterparts or the presence of a corrupt board that refuses to invest towards the club’s development is a conversation that will further fuel an already volatile fanbase. However, this model is far from foolproof and for a club that is aiming to reach the heights of its glorious past, solutions to the several problem areas must be discovered and that too instantly.

The potential signing of Ziyech is one that does not require the Gunners hierarchy to dig too deep into their pockets. In addition, the Moroccan international will provide excellent service to the Premier League’s most coveted strike partnership of Alexander Lacazette and Pierre-Emerick Aubameyang.

With Henrikh Mkhitaryan and Alex Iwobi among their ranks, Unai Emery has had to deploy Golden Boot winner, Aubameyang on the wide left in order to compensate for the inconsistencies of the aforementioned duo. A combined 10 goals and 15 assists from the two widemen is a poor return in a league in which wingers such as Mohamed Salah, Eden Hazard and Raheem Sterling have been leading their frontlines.

On the other hand, Ziyech’s inclusion can allow the Spanish tactician to centre his team around his strike partnership in a direct 4-4-2 system.

The Ajax wideman can also lessen the goalscoring burden on Lacazette and Aubameyang who have scored 47.9% of the Europa League finalists’ goals this campaign. 22 goals across all competitions makes Ziyech a lethal option in front of goal and could transform Arsenal’s front three into one of the most dynamic trios in Europe.

The competition to sign Ziyech will be stiff, however, if Arsenal can manage to secure his services, the chances of regular Champions League football could once again be a realistic possibility for the club.