Every great side in football needs that one player. The player who eats, breathes and sleeps for their team. The player who has no greater goal in their career than to win with their club. Some names that instantly spring to mind are those of Iker Casillas at Real Madrid, Francesco Totti for Roma and Steven Gerrard with Liverpool. The latter inspired a new generation of youngsters, none more prominent than Merseyside’s own Trent Alexander-Arnold. Now whether this Liverpool side does actually go on to win the league remains to be seen, but there’s no doubt who the happiest man in the world will be if they do.

A West Derby lad born and bred, one would’ve thought growing up a stone’s throw from Liverpool’s training complex at Melwood would make his path into football a straightforward one. Far from it. Gravitating more towards rugby in his early days at St. Mary’s school, Trent caught the eye with his speed across the turf as a seven-year-old. That pace has developed into one of the biggest weapons in his arsenal today, allowing him to keep pace with Mo Salah’s tearing runs down the right flank, among other things.

Things could have been so much more different, however, Alexander-Arnold made his way to the club’s summer camp for schoolboys after having his name come up in a lucky draw. Sometimes all you need is a bit of luck, and once the door to his dreams opened, Trent never looked back. 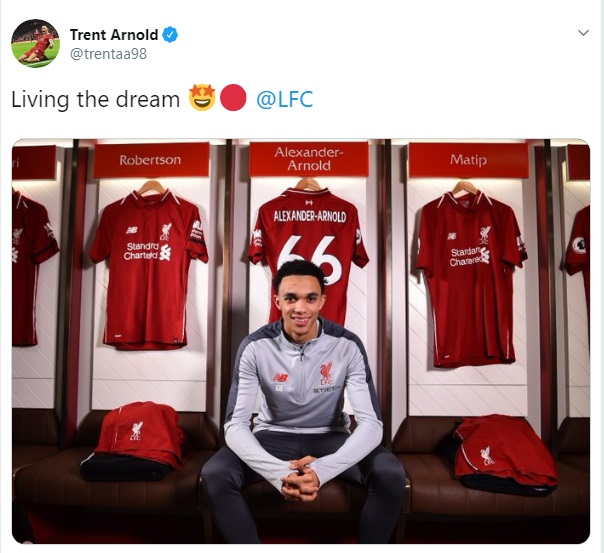 Impressing as the captain of the U-16s and U-18s, Arnold earned his first-team call-up in the 2016/17 season. Although a midfielder by trade, he soon found out that the only way to force himself into Jurgen Klopp’s plans was by slotting into the right-back position.

A sprinkling of first-team performances, including a debut at Anfield against Spurs in the League Cup, a first League start at Old Trafford of all places and an appearance in the Merseyside Derby gave him a taste of the big-time, but he wanted so much more. It was just a case of biding his time.

With Alexander-Arnold’s considerable potential being recognised as not harnessed correctly with the sparse game time he was afforded, whispers of a spell away on loan grew more frequent. But then something happened.

Nathaniel Clyne, the club’s undisputed first-choice right-back and Klopp’s trusted lieutenant, suffered a long-term back injury in pre-season. Instead of dipping into the transfer market for a replacement, Arnold was promoted from within, given until the end of 2017/18 pre-season to prove to Klopp that he really was ready.

He did just that. At no lesser a stage than his Champions League debut away to Hoffenheim, the youngster brushed aside the likes of Salah and skipper Jordan Henderson and dispatched a peach of a free-kick to set his side on their way. The first goal of what was a wild, wild ride in that season’s competition for the team as well as Trent, who turned in one lionhearted performance after another. The run to the final was a learning curve, as was the crushing defeat in it, something he would have felt more than most.

Just over 18 months on from his professional debut, the Golden Boy nominee is now in the biggest battle of his brief career. Although he earned his stripes in this Liverpool side as the buccaneering full-back with a tendency to bomb forward, he has had to dial things back a little bit as a vital cog of the most miserly defence that is driving his side’s title charge.

As opposed to hugging the touchline before, the arrival of Xherdan Shaqiri means that Trent takes up his station further back on the flank. In this more conservative avatar, the improved defensive skills in his game have been displayed. He has matured well beyond his tender years by virtue of his experience and is showing just that as he continues to develop.

Winning a first Premier League title with Liverpool, if it does happen, will not be enough for Alexander-Arnold, even though he will have done something his childhood idols in Gerrard, Carragher et al, could not. In his own words, he has vowed not to rest until he is given the captain’s armband with the club of his dreams. 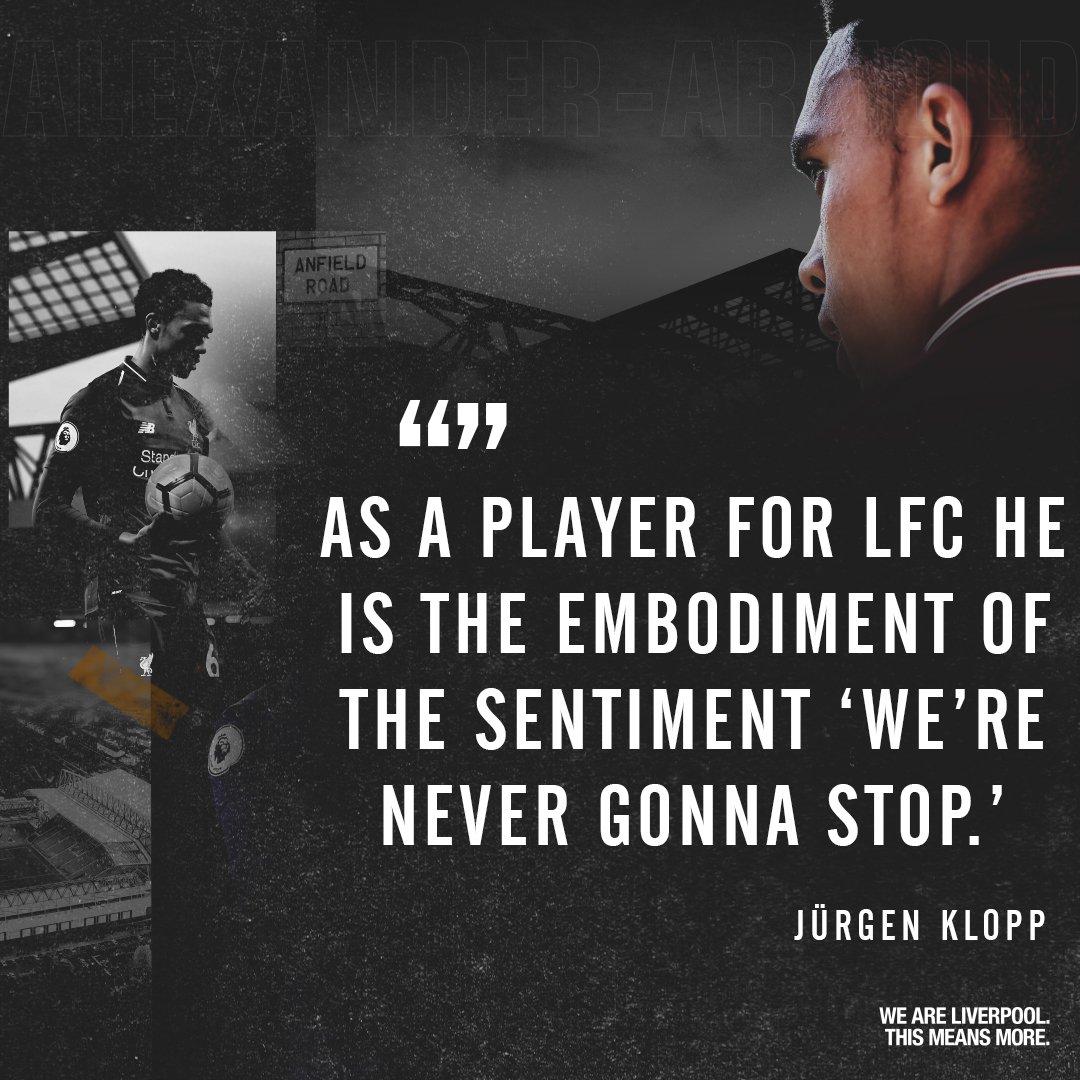 His progress was recognised when alongside fellow full-back Andy Robertson, Trent was rewarded with a new long-term contract at the club. But putting pen to paper was always a formality. Had he had his own way, Arnold would have signed the damn thing for life.

The general consensus around Anfield seems that it is a matter of when, not if, that Alexander-Arnold moves out of defence and into midfield. His skill on the ball, range of passing and accuracy in dead-ball situations, combined with his work rate makes him an ideal candidate for the job once taken up by his hero.

Brilliant play from @LFC. I do think @trentaa98 is too good a footballer to be a fullback. Must end up in midfield.

Speaking of the then 16-year old in his autobiography, Steven Gerrard mused,

“Trent Arnold has a terrific chance of making it as a top professional. He’s quite leggy but he’s got a lovely frame and seems to have all the attributes you need. He can play as a number 6, a holding midfielder, but he’s versatile and I’ve seen him fill various positions.”

What better endorsement can there be than one from one of the Premier League’s finest ever midfielders?

However, Trent isn’t too fussed about where he gets his minutes on the pitch, for club or for country. Even though he has his picks of fine moments in the red of Liverpool, he admits that the finest moment of his fledgeling career came when Jurgen Klopp informed him that he was headed to Russia for the World Cup.

Although he made just the one start in a dead rubber of sorts against Belgium in the group stages, Arnold now seems primed to take over from the likes of Kieran Trippier, providing stiff competition for the right wing-back role in Gareth Southgate’s team. Scoring his first goal for the Lions against USA recently has done Arnold’s chances no harm.

That is a matter for another time. When you go from making your club debut to playing in the Champions League final and World Cup in a space of months, it’s important to keep perspective. He may have the world at his feet, but Alexander-Arnold has them firmly planted on the ground. Looking ahead after signing his new contract earlier this month, he said, “The dream and the plan for me is to be as successful as possible at this club and bring as much silverware as possible – and hopefully become the best you can be. The sky’s the limit, I guess.”