Fans of Manchester City and the Premier League were incredibly disheartened at the sight of one of its greatest ever midfielders retiring. It had been later clarified that Gnégnéri Yaya Touré was not going anywhere; he still believes he has it in him and is ready to prove himself for another couple of years. But it can be fair to say that for football fans worldwide, Yaya Toure had seemed like he had been retired for the last 2 seasons. However, if one casts their minds to a period in the early and mid-2010s, the Ivorian coasted through absolutely seamlessly in the City midfield.

Things were not always so complicated for the 6’2″ midfielder. There are many who agree that he has earned a place in the highest of brackets amongst the Premier League midfield alumnus. Frank Lampard, Steven Gerrard, and Paul Scholes are one of the most loved and respected English midfielders to ever set foot in the Premier League, but Roy Keane, David Silva, Patrick Vieira, and Yaya Toure have just as much earned the right to ask a few questions about the matter. A popular viewpoint in City fans’ eyes, is that the Ivorian had perhaps the biggest part to play in the quest for the initiation of City’s unrelenting Premier League dominance. His contributions were unparalleled ever since he set foot in the league, establishing himself as a world-class player when he joined the sky-blues’ midfield.

He made his professional debut at the age of 18 at Ivory Coast’s  ASEC Mimosas where he flourished the same way as many of the nation’s stars such as Gervinho, Emmanuel Eboue, Salomon Kalou and his older brother Kolo Toure. His impressive performances resulted in a move to Belgian club Beveren, who prided their recruitment in signing and showcasing that Ivorians could deliver in the big-time European leagues. However, when the rangy midfielder had the incredible opportunity to make an impression in his Arsenal trial – a pre-season game against Barnet, he failed to rise to the occasion

Arsene Wenger could see the talent in the player but described his performance as “completely average.” The French manager was still keen to sign the 20-year-old, but issues with his work permit made Toure quite impatient, as he signed with Ukrainian side Metalurh Donetsk where he spent one-and-a-half-years.

His big break came soon after as Greek giants Olympiacos came calling and Toure was instrumental in a season which resulted in a double for the champions.  A lustrous campaign in his first FIFA World Cup in 2006 meant that the midfielder was Monaco-bound. His imposing performances in the red and white of AS Monaco resulted in a move to Barcelona which put him on the map as one of the best young midfielders in the world. 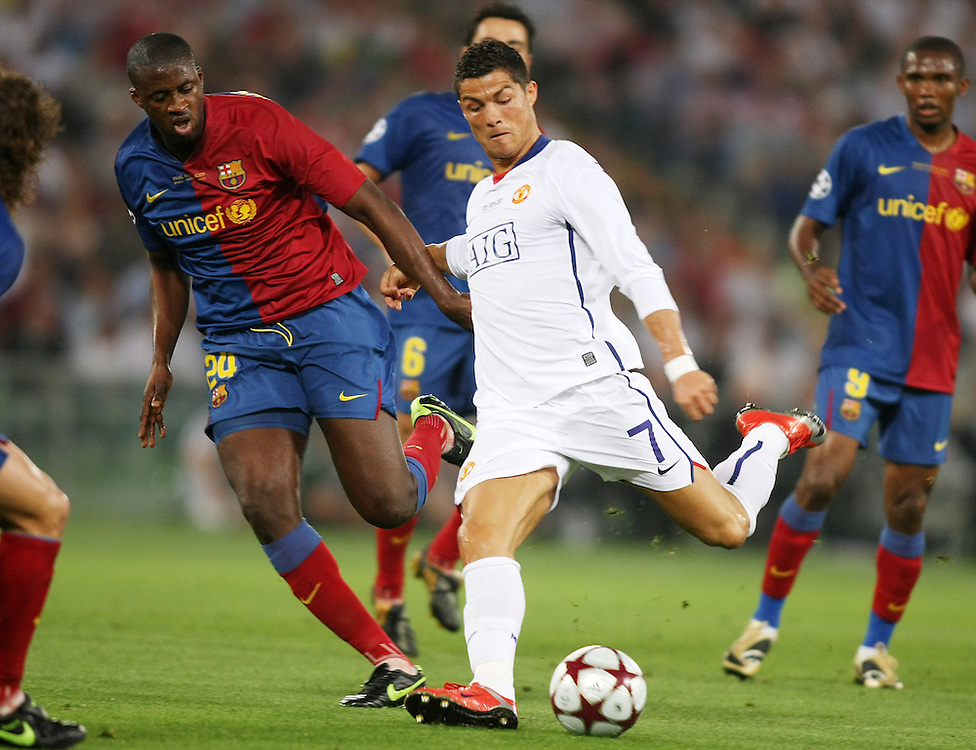 The 6.7 million-man largely deputised as a central defensive midfielder in Pep’s conventional midfield three. Game time was not abundant as he faced competition in the midfield three with Xavi, Iniesta, Seydou Keita, and Sergio Busquets. The number 24 had infamously started and excelled as a makeshift centre-back against Manchester United in the UEFA Champions League final in 2008, where he successfully kept the attacking wizardry of the likes of Cristiano Ronaldo and Carlos Tevez at bay.

Perhaps, Toure had not been given the chance to shine as what he had expected or he thought he deserved at Barcelona, with his agent Dimitri Seluk slamming the Catalan boss Pep Guardiola numerous times for his seemingly ‘racist remarks and ideals’ that resulted in infrequent minutes in the starting XI for the African Player of the Year who had won the accolade 4 consecutive times.

In 2010, the newly-risen powerhouse from the blue side of Manchester felt it best to match their huge ambitions by bringing in a huge player from Barcelona. The 24 million signing of Toure was a statement of intent by the club. It was here that his frustrations seemed to dissolve and his performances evolved.

The Ivorian superstar did not drop jaws as per standard procedure in his friendly debut against Club America as he received the groans of City fans that were unfamiliar with his laid-back strut and relaxed body language was the lazy elegance to come that they were simply not accustomed to.

As time and history reveal, this was Yaya Toure’s magnum opus.

He quickly emerged as a world-class player for Roberto Mancini in a system where he flourished in a more attacking position, as opposed to screening the ball in Barcelona’s midfield. The player racked up goals in double figures for the first time in his career. A general consensus among the Citizens was that he played a major part in propelling the club into a side meant to be considered as a heavyweight and an intimidating challenger in the quest for domestic dominance. Goals in the semi-finals of the FA Cup against bitter rivals Manchester United and in the final against Stoke City had put the club on the map following winning a major trophy after 35 years in the top flight.

A vital brace against Newcastle United that put City in pole position ahead of the penultimate game of the 2011/12 season confirmed the age-old adage that the very big players always step up in big moments for their team. Yaya Toure was instrumental in the club’s first league title in the top-flight for 44 years.

What lay ahead in the 2013/14 campaign was one of the greatest individual seasons in the history of the Premier League. City’s number 42 was a constant outlet of goals in the side, completing the season with an astounding tally of 20 goals and 9 assists in the Premier League. City finished the season as champions with the Ivorian netting more goals than the likes of Wayne Rooney, Sergio Aguero, and Edin Dzeko.

The Ivory Coast international was imperious as he would pick the ball up from midfield, glide through the entire defence and finish like a seasoned striker. Superb solo strikes against Aston Villa and West Ham United spring to mind. The midfield titan scored a vast variety of goals as well, he was ferociously efficient from dead-ball situations, scoring 6/6 goals from the penalty spot and converting 4/7 direct free kick opportunities.

But perhaps his greatest party trick was the sheer amount of ease and power that went into his long-range shooting. The number 42 had a penchant for the spectacular, scoring 17 Premier League goals from outside the box. The most bewildering aspect of which was that he did it so effortlessly, generating power from either foot without needing a run-up at all.

His equaliser against Sunderland in the League Cup final remains to be one of his greatest ever goals. Not even nine men behind the ball could stop the 35-yard thunderbolt he generated- the very definition of the footballing ‘postage-stamp.’ The goal was the first of three in which City picked up their first piece of silverware under Manuel Pellegrini.

He missed out on the PFA Player’s Player of the Year after losing to Luis Suarez, who inspired Liverpool to a runners-up position in the Premier League.

The Ivorian marvel was always a step ahead of the curve, absolutely untouchable on his day. A perfect example of a box-to-box midfielder, while his defending may be called suspect at times, he was nothing short of sensational in his attacking prowess. Fast, strong, a brilliant passer, an excellent reader of the game and an unparalleled output of goals from midfield set him as the best from the rest. He was the complete midfielder.

Hailed as one of the greatest ever African players, he has been one of the regulars in the Cote d’Ivoire national team. Toure has over a century of caps for his national side where he captained Ivory Coast to the African Cup of Nations, a competition in which he represented the country 6 times. He was named in the CAF’s team of the tournament thrice, including the season when he lifted the trophy. He retired from Les Éléphants in September 2016.

An inspiration to millions of players in England and in Africa, Toure has often been in the limelight for the wrong reasons. Vastly controversial statements made by his agent Dimitri Seluk had hampered his City career in 2016 where he stated that Guardiola humiliated Touré by omitting him from the first team. In response, Toure was to be indefinitely benched until Pep received an apology from his agent. Toure returned to the side after a formal apology was made on behalf of his agent in an away 1-2 victory at Selhurst Park where he bagged a brace.

The infamous cake fiasco also dampened the impression of the City fans on the player, where his agent slammed the owners for the failure to mark his 31st birthday sufficiently.

“Yaya is so upset, he is thinking of leaving City,” Seluk said. “There are a number of things that have happened that have left Yaya feeling bitterly upset. City have treated him with disrespect and have really hurt him.

“The club’s owners ate a 100 kg cake after winning the Premier League this season, but when they and the players were all together, none of them shook his hand on his birthday. It shows they don’t care about him. They don’t know that money can’t buy relationships – no Sheikh can buy a relationship.”

After a disappointing couple of seasons for the Sky Blues, Toure stated that he would leave City in June 2018. He played his last home game for Manchester City against Brighton and Hove Albion where he was met with nothing but applause and gratefulness from the City faithful. The club paid a classy homage to the legendary midfielder by unveiling a mural of the man at City’s training ground.

While Toure left City on a sour note by criticising Guardiola for being racially discriminative as the reason for not selecting him as often as he felt he warranted, this was an extremely disrespectful and false statement considering the rise of the likes of Samuel Eto’o, Eric Abidal, Raheem Sterling and Fernandinho to name a few under the Catalan’s tutelage. But for fans who have experienced so many highs and lows in their time, City is an emotional club, and their fans recognise one of their greatest ever if not the greatest player as a City legend.

He might not have called an end to his footballing chapter just yet, although it is evident that his best years are behind him. But Yaya Toure will forever be one of the most celebrated personalities in Manchester City history who has a right to be called as one of the greatest Premier League players of all time.