This article was first published on Quora

Amongst many he’s respected

His departure could have been extended

The board’s antics could have been prevented

A lack of his successor has left the fans disoriented

He wasn’t the Jack of all trades

He was the master of a field which he reinvented.

Xavi was a supremely talented football player. Despite that, he was far from a physical specimen or the most versatile dribbler, but what made him stand out was his passing ability. But that would be a common misconception. What made Xavi unique was not his passing technique, but his decision making and off the ball movement.

Every midfielder who considers himself an excellent passer must have developed the following skills –  an eye for a pass and the execution, i.e., the weight of the ball to deliver it to the receiver with aplomb.

With enough dedication towards your craft and the gift bestowed upon a certain clique of budding footballers to shine in the centre of the park, these two skills eventually become second nature.

Talents such as putting enormous amounts of graft into becoming a tireless worker such as the likes of N’Golo Kante or developing an immense range of passing, similar to magicians such as Xabi Alonso are skills that can be honed, on the other hand.

However, the off the ball movement to move into pockets of space to help a player that has been marked or pulling an opposition player out of his position to upset the team’s structure demands a special footballing brain. As ex-footballers and pundits repeat incessantly, controlling the tempo of a match is not necessarily a teachable skill and midfielders of the ilk of Paul Scholes, a role model of Xavi possess this knack.

The beautiful game has evolved in a plethora of ways and despite the relentless end-to-end nature of a match, the Spaniard’s ability to pause, spot the perfect pass and manoeuvre the pace of the contest is unfound. While many might disagree with this notion considering Xavi spent most of his career in one of the greatest modern sides in history that was so dominant in possession, but the truth is it requires brilliance of another kind to be the metronome of such a system.

In matches where Barcelona were on the backfoot, it was Xavi’s penchant for draining the momentum of the opposition by slowing the match down. He knew exactly when to slow down and build up attacks more carefully, and when to speed up to take advantage of an opening in the opposition’s defense. Peak Xavi essentially became a one-man attacking build-up that linked up with his teammates all over the pitch and slowly moved his team forward until they had completely taken over their opponent’s half.

In the modern era, sports scientists have made the switch from statistics like goals, assists and key passes to XG, XA and others. However, these statistical measures tend to be biased towards forwards. In this piece we look at a new way to measure players, via their in-game movements [1], a study conducted by an MIT student (We’ve left that study as a footnote, please go through it, it’s highly informative)

“Most of the analysis and evaluation of the players’ performance do not contain much information on the physical aspect of the game, creating a blind spot in performance analysis. We propose a novel method to solve this issue by deriving movement characteristics of football players. We use event-based datasets from data provider companies covering 50+ soccer leagues allowing us to analyze the movement profiles of tens of thousands of players without any major investment.”

This statistical study takes a closer look at the movements of three players (from the 2012/13 season), namely, Lionel Messi, Cristiano Ronaldo and Xavi and tries to analyze the patterns of their movements.

As you can see, Ronaldo’s movements are very predictable, cutting in from the left, running large distances down the wing. The Portuguese also has a tendency of occupying central positions as he had started to operate more like a No.9 in the latter stages of his career at Real Madrid.

Messi, on the other hand, is less predictable, but we can still say that he only has 6 ways to attack the opposition goal and prefers to stay on the right-hand side of the field to complement his wand of a left foot. The Barcelona man tends to drop into midfield to initiate a number of attacks by engaging in swift one-two’s and finding space from outside the box to test the goalkeeper. 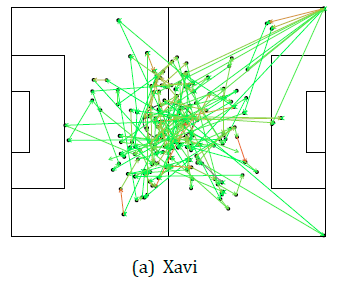 Now, Xavi’s movement map, on the other hand, cannot be deciphered, maintaining incredible consistency in his passing, despite operating in such a variety of spaces on the pitch. 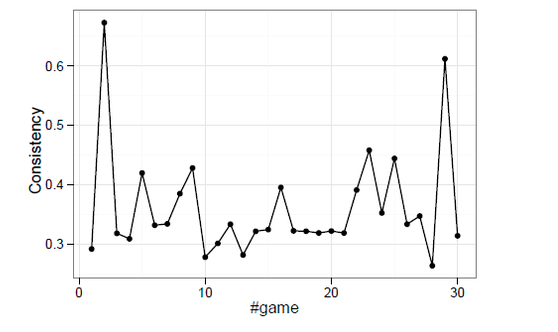 However, what is notable is that Xavi also maintains a consistency in his movements and they differ in only 40% of his matches. There is a method to the visual and spatial madness.

The question should be rephrased as to whether Barcelona want to replace Xavi at all or want to accept that the modern game is changing and then try to build the team in a different way.

That’s the underlying problem when a team is built around generational talents like Messi, Xavi or Ronaldo. Once they retire, it is extremely hard to find a replacement for above-mentioned players. Barca have invested in many talents to find a replacement for Xavi. Manchester United have failed to find suitable replacements for their famous centre-back pairing of Ferdinand and Vidic and spent ridiculous amounts on players like Bailly and Lindelof.

The best way forward is to embrace the fact that the game is changing and it close to impossible to find another Xavi again and therefore, focus on a new system.

But, if sticking with the Cruyff system or the Pep system is a non-negotiable aspect of the Barcelona tradition, then Barca better find a replacement for Xavi as fast as possible.

The 3 most viable options at this point would be Thiago Alcantara, Miralem Pjanic or PSG’s Marco Verratti to take the stalwart’s place. Arthur Melo is showing good promise, but it is too early to make any judgement on that.

Despite Barcelona’s financial constraints, to execute this system, it is time to find a suitable replacement to function as the puppet-master and rewind the days to the maestro’s prime days.