Group E is a well-balanced mix of teams, comprising of France, Denmark, Peru and Australia. It features diverse styles of football, from the off the cuff brilliance of France to the solid tactical Australian approach. While France will aim to win the tournament, the likes of Peru and Australia will enjoy the journey. From Griezmann to Guerrero, Eriksen to Rogic, this group has many a bright talent to watch out for. Each game should offer a unique pattern of play, interesting moments and great goals. Group C will offer us a great insight into the potential stars of the tournament.

Viva la France, the passionate unifying call to the motherland of the French. A land of croissants, romance and football. From the glory years of Zidane and Henry to the shameful scandals involving Franck Ribery and Karim Benzema, the French public have seen it all. But one gets the feeling this current group can bring the dreams of the French football romantic to reality. Didier Deschamps, in charge since 2012, has done a fine job honing this current group. An Eder sucker-punch away from winning the Euros, France will be desperate to go one better on the biggest stage.

His squad is stacked with young talent in each third of the pitch. Hugo Lloris remains the preferred number 1. While he remains an excellent shot stopper, the fact he has made the most errors leading to goals this season in the Premier League will mean his positioning and command of his box are deficiencies opponents will want to target. Layvin Kurzawa and Benjamin Mendy are good options at Full-Back, with Deschamps likely to favour Kurzawa given Mendy’s injury woes this season. 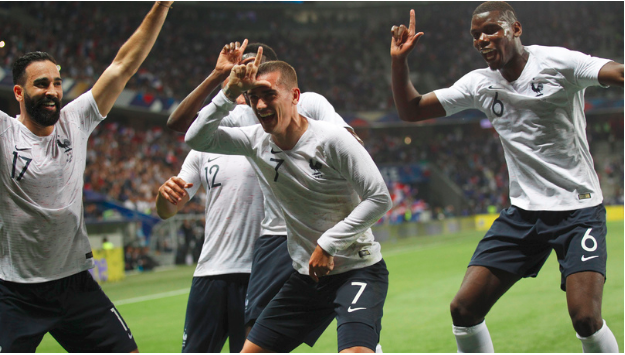 A Centre-Back pairing of Samuel Umtiti and Raphael Varane is likely to be Deschamps’ preference. Umtiti’s ability to play the ball out from the back complements Varane’s excellent one-on-one defending. N’golo Kante is the base of the midfield, with a rabid desire to win the ball and effect transition moves. While Paul Pogba should be an automatic pick, the Manchester United man is as frustrating as mercurial. A recent France Football poll showed 72% of fans do not have him in their XI which represents a worrying dip in his form.

The likes of Tolisso and Matuidi are possible alternatives. The final third is where France carry the most fire. Antoine Griezmann remains one of the most consistent players at Les Blues, while Kylian Mbappe and Ousmane Dembele represent two of the game’s brightest prospects. Olivier Giroud’s hold up and link play remain vital to the side. Nabil Fekir and Thomas Lemar form great back-ups.

Australia enter the World Cup with an experienced coach and what most people would call ‘a just about par squad’. The Socceroos come from a land in love with rugby and cricket, where top class footballing talent is sometimes hard to find. They start with odds of 500/1 to win the World Cup, and while Leicester City had the same odds before their fairy tale, the Aussies would probably settle for a good showing and hard fight. Bert van Marwijk, who led Holland to the finals of the World Cup in 2010 is an experienced coach.

Matt Ryan is expected to start in goal, and having consistently featured for Brighton in the Premier League, should be able to handle the stage. Brad Jones remains a backup. Trent Sainsbury, of the Swiss league, has been a fixture of the coach’s teams and should be a starter. His excellent form for the team down the years will have to continue against the likes of Griezmann and Kylian Mbappe. Aaron Mooy of Huddersfield Town forms the midfield lynchpin. His ability to play as a conventional Number 6 and hit long balls will be crucial to the side. Tom Rogic of Celtic will form the attacking axis in midfield. His direct risk-taking game will create a lot of chances for the Aussies. 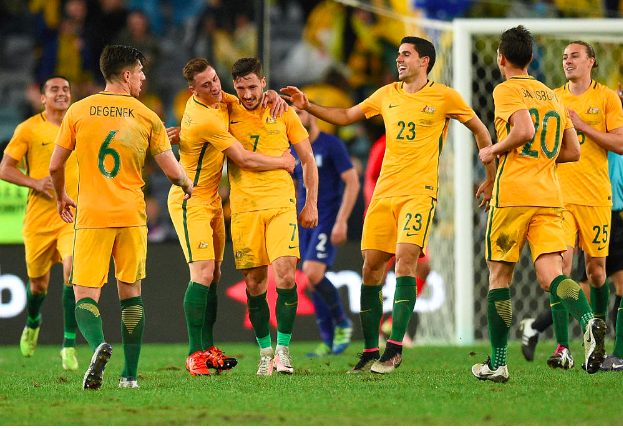 Given Tim Cahill is now 39 and hardly kicked a ball this year, the Aussies lose as much a charismatic talisman as a prolific goal-getter. 50 goals in 105 appearances mean he is a cult figure amongst football lovers down under, but the team must find a way to overcome his limited availability. Tom Juric will be a preferred option up top, given his heading and hold up skills. Robbie Kruse is another option up top.

This offers an idea about the style of play van Marwijk will deploy. It is likely to be an industrial, effective method similar to the one Holland deployed in 2010. With a game based on tactical awareness, the Aussies will look to sit and soak up the pressure. On ball recovery, the system is likely to rely on Mooy to spring out-balls long and quickly. Juric up top will be a target-man, and his ability to create flick-ons and knock-downs could bring his fellow forwards like Kruse, and Rogic into play. While it may seem a bit drab, there is no doubt it is structured. And perhaps that is what will get the Aussies far.

A lot of the talk revolving around Peru in the build-up to the World Cup has been about captain Paolo Guerrero. Having tested positive for use of a banned substance, a Swiss tribunal court has agreed to lift his suspension. The fact that all 3 of their group opponents wrote to FIFA approving this represents class and sporting ideals. However, while this has buoyed spirits of the football public in Peru, the nation knows it will have to do a lot more to find a path out of this group.  Manager Ricardo Gareca has done a remarkable job so far. After a 35 year hiatus, returning to this stage will mean the world to Peru.

With the passion and thunder of their fan base, Peru will hope to topple a few apple-carts this time. Alberto Rodriguez is the defensive rock on which the side is built. His commanding presence at the back guided Peru to a 3rd place finish at the Copa America in 2011 and his experience will be vital. Christian Ramos is likely to partner him at the back, forming a solid pair. Renato Tapia is a sure pick in midfield, and his flexibility to shuttle between defence and midfield is valuable. 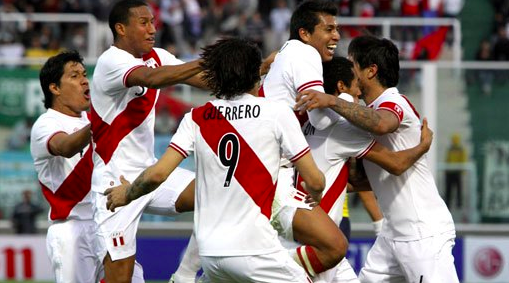 Up front, Peru pose some threats to cause opponents problems. Andre Carrillo is the only Premier League player in the side. Having played for Sporting, Benfica and now Watford, he is used to this stage. Given his comfort as both a winger and second striker, he will be an integral part of the XI. Christian Cueva offers great control in tight areas and offers a different dimension to the attack.

Finally, there is Guerrero. The footballing gods have willed him to play and he must now make good of his chance. Having been nominated for the Ballon d’Or in the past and a part of the European game, a lot of the goal scoring brunt falls on him. He will hope his presence can spur his team to greatness. And so will an entire nation, in one unified prayer.

One cannot help but find low-grade banter swirling around Nicklas Bendtner on the internet always, but a groin injury has ruled him out for the World Cup. This time, however, Denmark will feel they have got together a good group, one that can make a good attempt at progressing deep in the tournament. Kasper Schmeichel is likely to start in the goal, and many of his father’s traits are his own as well.

The defence comprises the excellent Andreas Christensen, who has defied the odds to become a preferred Centre-Half at Chelsea. Also, one to watch is Simon Kjaer, from the Sevilla side with the heroics at Old Trafford, who is very composed on the ball. The midfield and the team itself is driven by Christian Eriksen, who makes things happen. His range of passing, the deftness of touch and shots from range are up there with the finest in the sport. Without Erisken, they seem an extremely sub-par side. 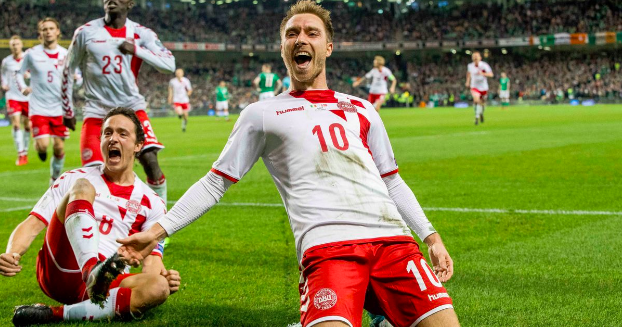 The problems are seen a little more openly in the top end. While the likes of Yussuf Poulsen and Kasper Dolberg are great talents, a lack of experienced fire-power is a problem Denmark face. Erisken is an absolutely world-class talent on his day, and the side is set up to match his eye for a pass and goal. One will have to wait and see whether Denmark can get far playing this way or whether they risk over-reliance on just one, albeit fantastic player.

France will be most neutrals pick to reach the semis or even the final, and they should top the group barring any major problems. A solid start in the group can help the team to plot a path to peaking at the right time. The battle for second is sure to be close.

The lack of relative quality in the Australian team, compared to Denmark and Peru means they have it all to do. With the likes of Eriksen,and a solid back line Denmark should just be able to pip second. Peru will not give in easily,  reliance on a 34-year-old in Guerrero and an ageing back line might be their undoing and see them finish third.

For Australia, the lack of goals and a really rigid style of play will make it hard for them to get crucial wins. When they do get chances in games,they will need to be lethal. Or Else, it is hard to see anything but a 4th place finish in the group. It should be an intriguing group and give us an idea about some of the potential new stars of the game from France, and possibly throw up Iceland-esque heartwarming stories from the other 3.

Australia Image Via The Roar

Peru Image via Living in Peru