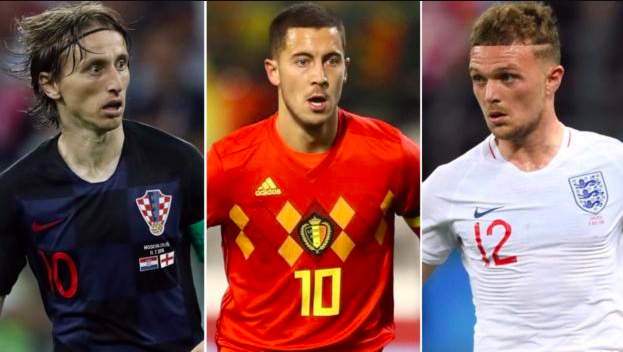 As the World Cup draws to its conclusion, we take a look at a team of the competition. Russia 2018 will be remembered as a World Cup for the ages, with all its twists and turns and an endless supply of drama. Linking up in an orthodox 4-3-3, here are the eleven individuals that were a cut above the rest –

Thibaut Courtois – Belgium’s ‘keeper sees off intense competition from Cho Hyun-woo, Hugo Lloris and Danijel Subašić to take his place between the sticks. After a sub-par season at Chelsea, the giant shotstopper regained his best form with the national team, making fine saves at decisive moments. His finest hour came against Brazil when he was called into action time and again with his team sat back against a barrage of attacks. The last and best of his saves, against Neymar, confirmed a historic win over the Seleção.

Kieran Trippier – The Tottenham wing-back was disciplined and industrious down the right flank, putting in tidy performances. With a lack of creativity in the centre of the park for the Three Lions, the onus was on the wide men to provide the final ball, and Trippier excelled with his pinpoint crossing. England’s biggest weapon was their set-piece potency, with Trippier often providing the ammunition as he stood over the dead ball. And he wasn’t too bad going for goal either, as his gem of a free-kick against Croatia demonstrated.

Most chances created at the 2018 #WorldCup

One more game to go. pic.twitter.com/7RsBbdRXMe

Raphaël Varane – It’s hard to believe that Raphaël Varane is still just 25 years old. Already more decorated than many greats of the game, he will be a worthy winner of the World Cup if it comes to that. Varane has benefitted immensely from compatriot Zinedine Zidane’s tutelage at Madrid, shaping himself into the perfect modern defender. Aerial ability, neat tackling and a range of passing that would put most midfielders to shame, he has it all. Having played every minute of this campaign with 4 clean sheets to his name, he walks into this team.

Diego Godin – Joining Varane in the heart of the defence is his cross-town rival from Atlético, Diego Godín. The Uruguayan man mountain was key to his team’s defensive tactics, dominating the opposition forwards. Godín kept 3 consecutive clean sheets in the Group stage before stifling Cristiano Ronaldo with ease in the Round of 16. He was unable to keep France at bay however, as their fluid attack broke his side’s stout resistance. The last of a dying breed, this could well be the last time we see Godín at the world stage.

Lucas Hernández – Another ever present in the France side, Hernández has been a real find this tournament. He seized his chance at Atlético Madrid in the wake of Filipe Luis’s long-term injury as he did with the national side, following Benjamin Mendy’s lengthy lay-off. Originally a centre-back by trade, he has added an attacking dimension to his play, providing width on the flank with Antoine Griezmann often tucked infield.

N’Golo Kanté – After his exploits over the last few seasons in the Premier League, it really is no surprise to see Kanté in this side. He has gone about his business in the typically quiet yet brilliant fashion his admirers are used to seeing. His endless running has led teammate Paul Pogba to believe that he has ’15 lungs’. Seeing the immense levels of output Kanté puts out, that isn’t an altogether outlandish claim. He was instrumental in shutting down the deadly Hazard and de Bruyne, and will be tasked with tussling with Luka Modrić in a battle that could well decide the final.

Paul Pogba – An enigma for Manchester United, a star for France. Pogba has been the driving force of this Les Bleus team, having the license to bomb forward in the presence of counterweights such as Matuidi and Kanté. This is not to diminish his disciplined defensive contributions, something club manager José Mourinho will be pleased to see. Pogba will hope his coming of age process culminates with a winner’s medal.

Luka Modrić – The Croatian maestro is the very heart and soul of this fairytale that sees them in the final. We already knew he was a class apart, having run Real Madrid’s midfield as they dominated Europe in the last few years. But with his national side, Modrić has found another level of brilliance not seen before. Taking up a multitude of positions across the pitch and excelling at them all, it’s safe to say that the diminutive number 10 has outshone even Davor Šuker as his nation’s brightest ever footballing star. World Cup winner or not, Luka Modrić has cemented his status as a modern-day legend.

Kylian Mbappé – While some are establishing themselves as greats at this World Cup, others are on their way to doing so. The hype surrounding the world’s most expensive teenager threatened to eat away at him, but instead he just took it in his stride. After a slow group stage, the PSG forward exploded (literally) against Argentina in the Round of 16, his electric run to win the opening penalty one of the images of the World Cup. It is no coincidence that on the day Messi and Ronaldo left the World Cup, Kylian Mbappé arrived.

Teenagers to score in a #WorldCupFinal

Romelu Lukaku – Leading the line is Belgium’s Lukaku. His awesome strength, pace and directness came to the fore for Roberto Martinez’s side as he scored 4 times. However, his finest performance was one in which he didn’t score. Starting in a wide right position against Brazil, Lukaku’s muscle was vital as he held up the play for runners around him to do the damage on the counter. He may not have won the golden boot, but he makes the cut.

Eden Hazard – Rounding off this eleven is the fleet-footed Belgian who is a strong candidate for the golden ball. For those who still doubt his genius, it was on display from start to finish. His 4 goals and 3 assists only tell part of the story, as he danced past defenders at will. He may have met his match in a France side, but it is a sign of the respect he commands that they sought to stop him by any means necessary. He has made no secret of his desire to engineer a move to Real Madrid, and a stellar World Cup campaign makes his résumé as Cristiano Ronaldo’s heir apparent even more appealing.

40 – Eden Hazard has completed 40 dribbles at this #WorldCup, only three players have had more successful dribbles at a single World Cup since Opta analyze the World Cup in full detail (1966). Elusive. pic.twitter.com/twSkcNhdzy