What a night of South American Football. Argentina witness a miracle courtesy of “Magical Messi”. Uruguay decimates Bolivia. Brazil dent the hopes of Chile at Sao Paulo, Jesus scoring a brace. Peru are through to their First ever World Cup. First Iceland and now Peru to play their first ever World Cup. Certainly, the 2018 World Cup is going to have surprise packages. Thank you for staying with us for the matches.

7:00 AM- Peru’s heroics see them through to the World Cup. Defeat at the hands of Brazil, sees Chile finish sixth, despite starting third.

6:56 AM- The G.O.A.L for a reason. He delivers at the most important time. Argentina headed to Russia.

PEEEEP! Argentina reach the World Cup finals – all thanks to him https://t.co/Fzuh1WfT0i pic.twitter.com/52TaGTrdXE

6:51 AM- Brazil defeat Chile 3-0. A late goal by Jesus makes itree. Bravo went up to salvage a goal but was caught in counter attack. Chile have lost in Sao Paulo. PEru have a straight run to the finish line.

6:48 AM- Three minutes of stoppage time for Chile as Peru have 4 minutes plus stoppage time to defend this dream goal. Peru will qualify for the first time.

6:45 AM- Chile have 2 minutes plus stoppage time to save themselves a berth.

6:41 AM- Guerrero scores for Peru. If the score stands as it is, Chile “DO NOT” qualify.

6:37 AM- Luis Suarez strikes from the centre of the box to increase the lead by 4-1.

6:33 AM- Uruguay on track to World Cup as they lead 3-1 at their own turf against Bolivia.

6:21 AM- Messi scores. All he needed was the little space and he completes his hat-trick.

6:17 AM- Goals from Paulinho and Gabriel look to seal the match for Brazil…

And we are back as the second half action starts.

Messi is on an absolute mission!! That second goal

Bolivia lead in Uruguay. Still a seven-goal swing required for the unthinkable in Montevideo. 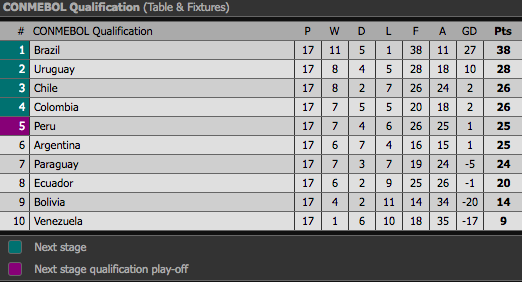 GOL DE ARGENTINA! Messi gets past the last man and absolutely hammers it into the top corner! Argentina lead 2-1 after 20 minutes!

If anyone is going to give a nation hope…

The whole stadium screams at the Allianz Parque as the announcer says Ecuador have taken the lead vs Ecuador.

Look at that clearance from Argentina, even. The panic. “Just get rid of it!” There are nine minutes gone.

A nightmare start for Argentina, who concede in the opening minute against Ecuador!

Lionel Messi and his team in real #WCQ danger! https://t.co/F6QJihVpPp

Welcome to EADF’s live coverage of the final round of matches in the CONMEBOL Qualifiers . Today all teams play their last fixtures as the race comes to a standstill. Brazil have qualified thereby taking the first spot. The last day sees 6 teams still trying to grab the chance with their own hands. Will “Messi”rescue Argentina?? Join Eadf as we take you through all the action…
“Brazil vs Chile
Brazil just drew away from home at Bolivia, a country known for its high altitude (the match happened in the capital city La Paz which is 3640 m above sea level), and they would love to win just to have a win during the international break. Chile would have their work cut out and they would have to at least get a draw in order to be in a comfortable position
Ecuador vs Argentina
Argentina HAVE to win this. No other option. And here’s one stat that would go against the Argentinians. They have never beaten Ecuador in Ecuador since 2001. Ecuador, like Bolivia, is another country in the Andes, and the capital Quito is 2850 m above sea level. The Albiceleste superstars will be playing the most important game of their lives on Oct 10.
Peru vs Colombia
Peru has been the surprise package of the entire qualification round. They do not have many players playing in the European leagues, and their star has been their veteran striker, former Bayern player Paolo Guerrero. However, their home form has been sketchy (4 wins out of 8), and the likes of Falcao and James would love to make the most of this in order to forget the shock home loss to Paraguay, a game which, had they won, would have secured automatic qualification.”
by Abheek Dasgupta