You are here
Home > Originals > Who will replace Leroy Sane? 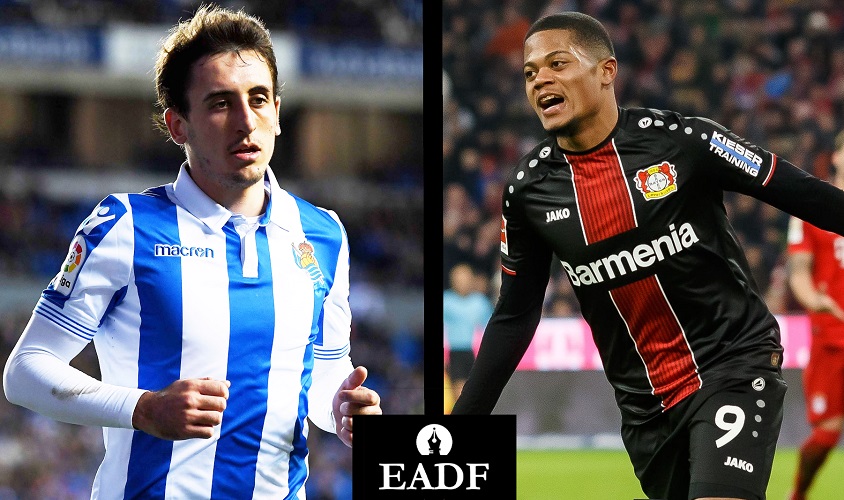 We have all read the news report from Sport Bild earlier this month where they claimed that Leroy Sane had reached an agreement over personal terms with Bayern Munich, ahead of a summer move that the two clubs are still finalising the transfer terms of.

This long going transfer saga that German and English fans have seen play out all season has seen City linked with two replacements over and over: Leon Bailey and Mikel Oyarzabal. Yet it remains to be seen who will or who should make a move to northern England. This article will try to discern who is more likely to make a move to Pep Guardiola’s City side based on the team’s requirements.

Before proceeding, it’s important to designate the requirement specifications City have set out that has led to a couple of players being constantly linked with the club. Some have argued that they already have a worthy Sane replacement – manchester evening news published a piece on the 28th of May suggesting that Riyad Mahrez was the perfect player to step in. Mahrez has had a good showing this season, scoring seven and assisting eight in all competitions, but he isn’t what City are looking for.

The evidence we have to look at suggests that Pep Guardiola is looking for a direct replacement for Sane. This means the player must be left-footed, who prefers playing on the left. In City’s system players are heavily encouraged to play what is known as a cutback. This is where the ball is carried to the touchline usually by a winger or full-back, before being passed back towards the edge of the box, where a player will have a great chance of scoring. For players who are right-footed such as Coutinho, it would be difficult to do this from the left-wing without either trying to turn the ball on to their stronger right foot or use a weaker left foot. That’s why ever since we heard about Sane’s likely move to Bayern, we have seen substantial links mainly to just Leon Bailey and Mikel Oyarzabal, transfer links which we will detail in this article.

Mikel Oyarzabal is a Spanish winger playing at Real Sociedad, who recently turned 23 years old and is having his best season yet in La Liga. He has scored eight goals and assisted six times in 25 starts on top of scoring for the Spanish national team in a Euro 2020 qualifier vs Romania in November. His individual performances have been fantastic in a side which has buried the days of David Moyes’ management, as they currently sit in 4th spot. Oyarzabal has been crucial to this success.

He’s the team’s top scorer, has the second most assists and second-most minutes. He has been on the radar of European clubs for a long time, ever since former manager Asier Garitano called him ‘the greatest talent I have trained’ (EldesMarque). Last November, City were reported by 90min.com to be prepared to activate Oyarzabal’s £67million release clause. However, that fee will no doubt become an issue in a post-Coronavirus world. Oyarzabal has yet to confirm or deny his interest, remaining focused on the season in Spain (Manchestereveningnews).

Now we go from someone in the middle of a breakout season to someone who’s Transfermarkt value has dropped from £36million as of June 2019 to his current value of just £26million. Leon Bailey has only participated in 32% of available minutes at his club Bayer Leverkusen (Transfermarkt), but despite this has scored seven and assisted two in just over 1000 minutes across all competitions, working out to a goal contribution every 120 minutes. This would rank him above Aubameyang for goal-contributions-per-minute, who’s figure stands at one every 128 minutes (Measured from stats across all competitions). The plot thickens more when you realise that four of his seven goals have come in wins against Bayern Munich, Dortmund and RB Leipzig. When he has played, he has been influential, so why has he played so little?

The answer is not clear. Leverkusen did sign Moussa Diaby from PSG who has been as fantastic as Bailey, and he operates in the same wide left position as the Jamaican born 22-year-old. There is little evidence to suggest his lack of minutes has anything to do with performance, it could be down to tactical decisions under Leverkusen manager Peter Bosz. The drop in value, though means that he provides a much cheaper option to Manchester City while being in the exact profile as Sane and Oyarzabal. He is an extremely fast athlete, twice speeding in behind the Bayern defence when he scored the two goals to beat them.

While he has said nothing of the persistent transfer rumours linking him to England, ESPN reported in January that Bailey was heavily considering making a mid-season switch away from Leverkusen. Whispers from his camp suggest that he aspires to become one of the best players in the world, and he feels he cannot do that from the bench. This implies getting Bailey out of Germany would be easier than obtaining Oyarzabal from Spain. Ever since the January ESPN story, there have been constant stories from manchestereveningnews detailing City’s interest in the player, as well as a story from sportslens reporting he has been identified as the potential Leroy Sane replacement. 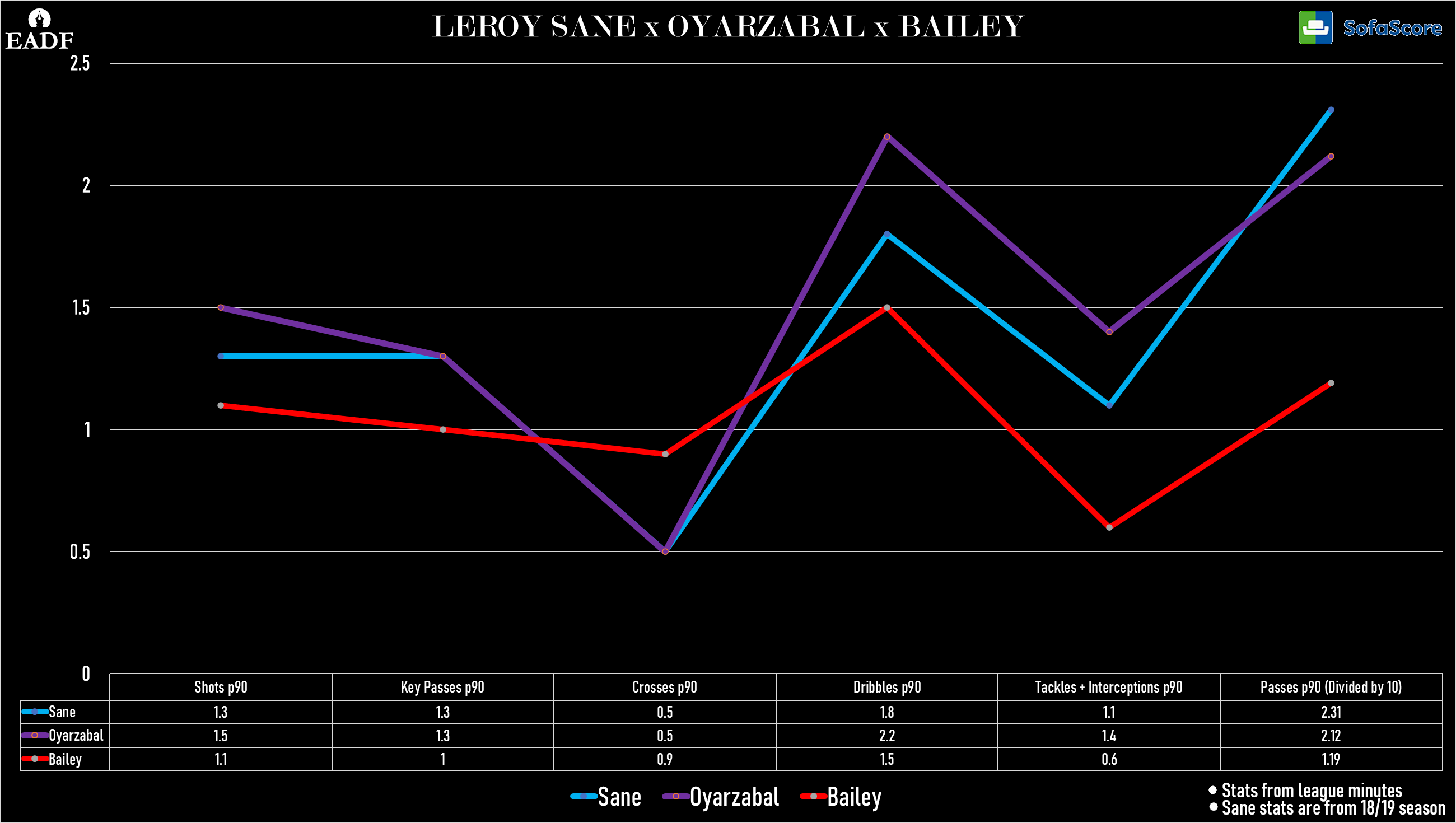 With both players introduced, it is now crucial to compare them to each other and the player they would be replacing in Leroy Sane. The graph above plots the key stats for a left-winger, and how all three players compare in stats taken just from league matches. The data has been obtained from SofaScore, using the stats of Leroy Sane from the 18/19 Premier League season and the passes p90 stat has been divided by 10 to make an easier comparison.

Oyarzabal crushes Bailey and is producing even more than Sane in 18/19 for shots, dribbles and tackles+interceptions p90. It is fair to note that Leon Bailey has not played consistently and perhaps would have found more weight in his statistical output with consistent game time. Yet, it’s clear that Oyarzabal is the real deal. His numbers are world-class, and one can see why City are interested in him.

Leon Bailey may look like the weaker option from performance-related statistics; however, looking at general player information taken from Transfermarkt offers us another perspective. Here we can see that Bailey’s cost is estimated to be £30million less than that of Oyarzabal, despite being younger. Furthermore, looking at the real output in terms of goals and assists, Oyarzabal has actually scored less in the minutes he has played when we compare it to Bailey across all competitions. 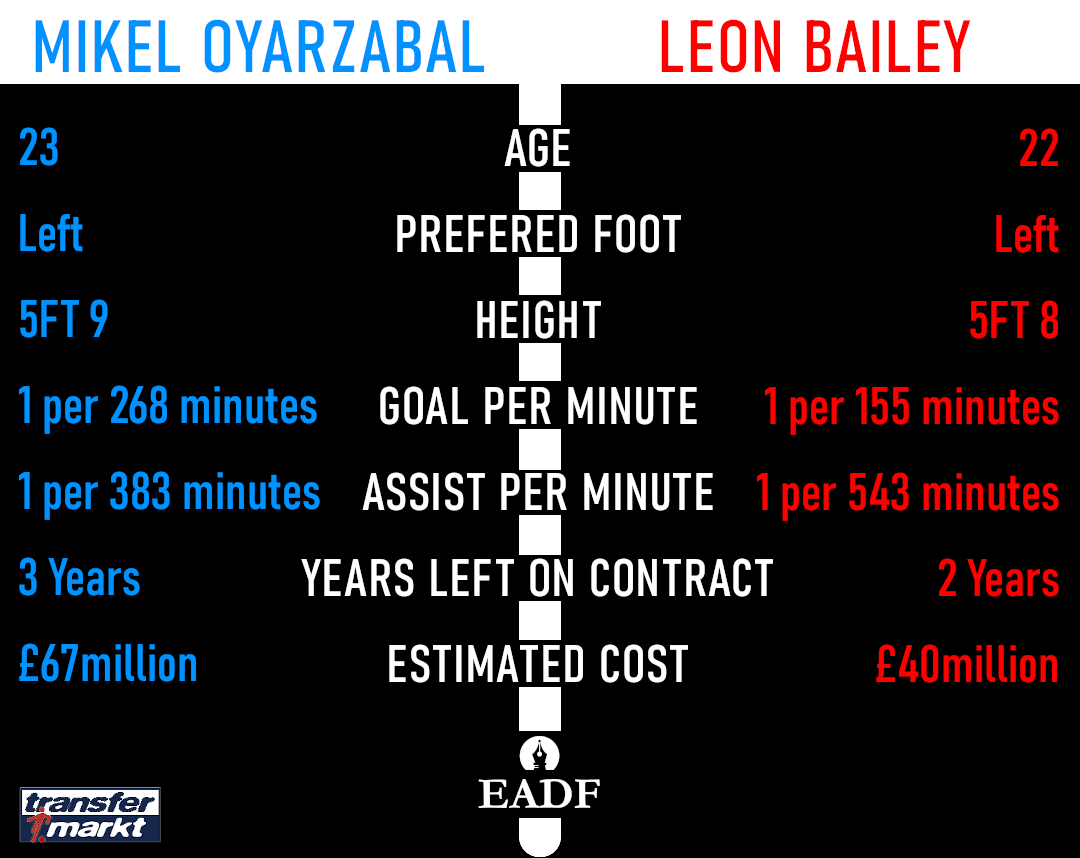 It’s clear the ideal candidate to take over from Sane is Oyarzabal. The Spanish born winger’s underlying stats show him to be producing similar, and even better numbers in some metrics to Leroy Sane last season. His current form shows he is capable of even more, as this season has got better and better for him, with his name becoming more recognised. Yet with that comes a hefty price tag that could put Manchester City off in this current financial climate. If Leon Bailey moves to City this summer, make no mistake, he has the potential to explode, and he is an impressive player in his own right. But the information shown suggests that a move for him would be City’s second choice behind Oyarzabal, and while the Spaniard is the preferred choice, Bailey is the most likely.