Watford came from behind and slammed two headers past Tottenham, to keep their their 100% record intact in the Premier League.

53 minutes – A strange own goal from Abdoulaye Doucouré, where he chested the ball into his own net while trying to intercept a Lucas Moura pass, though not without consistent Tottenham pressure. This own goal wasn’t exactly an outright mistake as it was the inability to deal with the attack. 0 -1

69 minutes – A Free kick fired in by Greek international Holebas found the head of Troy Deeney who managed a decisive touch on the ball. The crowd erupted and Spurs were now undertake caution. 1-1 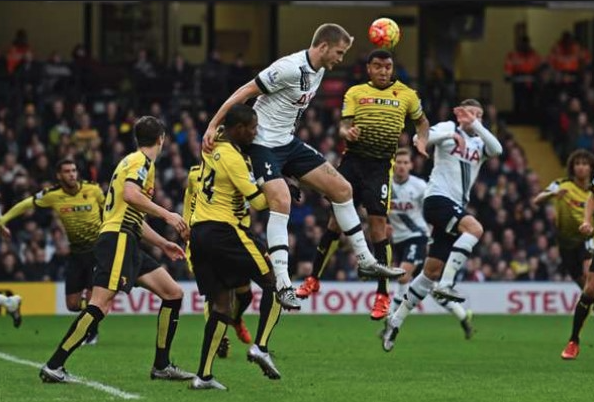 76 minutes – Another set piece by Holebas, this time a corner, found a forgotten and totally unmarked Cathcart in front of Tottenham’s goal, and the improbability turned to reality. 2-1

What Does This Result Mean?

Tottenham may not be as good as we think. It was foolish of some of us to assume that Tottenham would have it easy at Vicarage Road. Credit must be given to Watford and their coach Javi Garcia, but with the amount of control Spurs had over the game, they should have done more, much more. As the table stands, it’s Liverpool, Chelsea and Watford on top of the hill with 4 wins out of 4. Manchester City is at fourth with 10 points and Spurs are on fifth position with 9.

Watford are up to something special

Watford have taken the  footballing world by storm at the moment. In the entirety of the last season they only won 11 games, and this season they’ve already won 4. To add to the speciality of this event, living legend Elton John was there to watch his favourite club perform, ironically enough in a stand called ‘The Elton John Stand’.

If they somehow manage to beat Manchester United in their next game, we might have to acknowledge new challengers for a top 6 position. Still too soon? Perhaps. Though stranger things have happened in the Premier League

Take your pick from a host of official Spurs merchandise here

Did Spurs Play Badly?
Not really, but they did when it mattered. They had the game till they went a goal down and despite charging out multiple attacks, failed to really endanger Watford’s lead. Undoubtedly, Spurs were moving the ball marvellously well, and sometimes too quick for their opponents. Their level has now entered a new high performing standard. However, Watford were able to out-determine them with sheer perseverance and a bigger desire to win.

Spurs did not rise to the challenge, they looked slightly confused and were unable to keep their heads in place after the equalizer. The commentator rightly asked (or pointed out) ‘Now, what have you got Spurs?’ after they went 2-1 down. This is where we can call them out today – losing their quality when suddenly under pressure. They don’t yet have the element of clawing back into matches, which was a hallmark of Sir Alex Ferguson’s champion Manchester United side of the 2000-10 decade.

After conceding the 2nd goal, they did gear up, but kept making unforced errors before playing the final ball in. The defence looked good despite the two conceded goals, but the end product was missing from Spurs’ artillery. Respectfully, Pochettino calls a spade a spade – “Maybe you cannot play so well but you need to win this type of game if you want to be a contender at the end “.

Too many Watford players are on this list, if not the entire team : Capoue, Gray, Janmaat, Pereyra, Holebas and perhaps at the top of this list, captain Troy Deeney, all stood out and made very noticeable contributions. Holebas’ two assists means he has been involved in 5 goals this season, more than any other player.

Jan Vertonghen – A great game overall from the Belgian, he really is a class defender.

Toby Alderweireld played well, as did Kieran Tripper. Harry Kane looked really lost, almost as if he was out of energy or perhaps lacking match fitness. He looked too exhausted and non-influential.

Llorente realistically speaking cannot cope with this Tottenham side. He brings nothing to the table and after observing him for over a year one wonders what Pochettino notices in him that nobody else does.

Even team like Real Madrid which while fielding Cristiano Ronaldo, always played with supporting striking options such as Karim Benzema and Gareth Bale. This set-up ensures that if one forward isn’t on song, there are other equally capable players who can rise to the occasion and deliver for the team.

The pleasure and pain of being a Spurs fan is a disclaimer all are aware of. After a powerful performance against United last week, Tottenham fans watched as their side were beaten by an absolutely relentless Watford unit. One must ask the question as to why nobody thought it relevant for them to secure another striker, and none seem wise enough to answer. It’s not the striker really, it’s the mentality. When the gears are clicking for them, they can outperform teams – as they did against Real Madrid in the Champions League last season.

When they unexpectedly go down, they start playing completely off script, hoping for a goal rather than choreographing one – such as what happened in the game they lost against Juventus, as well as this one versus Watford. Spurs have more mental work to do than physical while every game Watford win from here on will add a page to their chapter in the Premier League history book.