The next Premier League season will likely begin around the 12th of September this year, and it could be a time for the two teams who have won the competition the most to rise once more.

Liverpool are bound to drop off a little from this season’s incredible yet unsustainable points haul, and the uncertainty at Manchester City grows with the ban from the Champions League a possible barrier to any potential incomings. With a touch of luck, Chelsea or Manchester United could return to glory.

Throughout the season, Chelsea’s biggest struggle has been the lack of clinical finishing. Understat ‘s expected goal metric states that Chelsea have underperformed their expected goals by 6. Callum Hudson Odoi, Willian and Mason Mount have been full of creativity, but they have not helped finish the chances. In fact, only Tammy Abraham has scored more than ten goals this season.

Thankfully, the signings of Timo Werner and Hakim Ziyech could instantly fix this problem. Werner has scored 26 goals this season in the Bundesliga, exactly double that of Tammy Abraham in the EPL. In fact according to FBREF, Werner averages 1.9 shots on target per game, higher than Abraham’s 1.4 and Giroud’s 1.2. Werner will arrive as the club’s best finisher, and his ability to play at LW means he can play in the same starting XI as Abraham.

The arrival of Ziyech promises more high-quality chances for Werner, Giroud and Abraham. Ziyech has provided his Ajax teammates 12 league assists this season, which is more than both of Chelsea’s top assisters put together (Azpilicueta & Willian). While critics argue this is the result of Ziyech performing for a top side in a weaker league, the evidence from Ajax’s 2018/19 Champions League run proves otherwise. In games against the likes of Tottenham, Juventus and Real Madrid, Ziyech averaged 4.2 passes into the opposition penalty box, excluding set pieces (FBREF). In the league in 19/20, Willian has averaged the most passes into the opposition box for Chelsea. His figure of though 2.6, is dwarfed by Ziyechs’, even though the Moroccan was playing against the best in Europe.

Ziyech and Werner also add to a wealth of squad depth and possible tactical possibilities at Frank Lampard’s disposal. We saw last Thursday how Christian Pulisic provides a deadly threat on the counter-attack as he blasted past Benjamin Mendy to score first against Manchester City. Timo Werner will not only be helpful on the counter but also his efficient finishing will be crucial against weaker sides. Oliver Giroud has extended his contract until next summer, so Chelsea keep the world’s best striker at playing with their back to goal, vital against pressing sides like Liverpool and tight marking teams like Burnley. Ruben Loftus Cheek and Tammy Abraham provide an aerial threat, both standing at 6ft 3 & 6ft 4. Should any of the players mentioned get injured, Chelsea have Hudson Odoi, Ross Barkley, Billy Gilmour and still possibly Willian if he extends his contract. Chelsea’s depth rivals that of any top European squad.

The one issue still unaddressed is the Chelsea defence. Frank Lampard is still yet to settle on a solid CB partnership, and the club has been heavily rumoured to be interested in Leicester’s Ben Chilwell. Chelsea have conceded 41 goals this season, the same as Brighton and Arsenal. If Frank Lampard can bring in Ben Chilwell, and sort out the rest of the defence, Chelsea could be extremely dangerous next season.

In contrast, Manchester United’s greatest strength this campaign has undoubtedly been the defence, conceding the 3rd least goals this season, with only Leicester and Liverpool conceding fewer. Understat suggests this is no fluke, as their statistics show that this defence has given up the 3rd least amount of quality chances in the league. This can only mean great things going into next season, as the established back four of Wan Bissaka, Harry Maguire, Victor Lindelof and Luke Shaw will become more cohesive with a season under their belt together. In fact, according to FBREF, Harry Maguire is the only player out of those 4 to commit a single error in the league.

The continuous problem though for United this season has been trying to unlock defences with a weakened attack. They have lost to Newcastle, Watford, West Ham and Burnley this season, failing to score against any of them. Now though, the Red Devils have the key tools at their disposal to stretch tighter defences.

Since the resumption of the Premier League season, Bruno Fernandes and Paul Pogba have been playing together for the first time. Across their matches against Sheffield and Tottenham, the pair came up with seven key passes, eight shots and ten successful dribbles. This is the creativity United were drastically lacking.

Looking at Bruno Fernandes alone, it is astonishing how impressive he has been since the mid-season move. The graphic below shows that his statistics are near matching Kevin De Bruyne’s, a player some argue should win the PFA Player of the year award. If the constant reports from the likes of SportBild are true, that Jadon Sancho will join United this summer, then Ole Gunnar Solskjaer’s side will find it much easier to break down opposition defences. 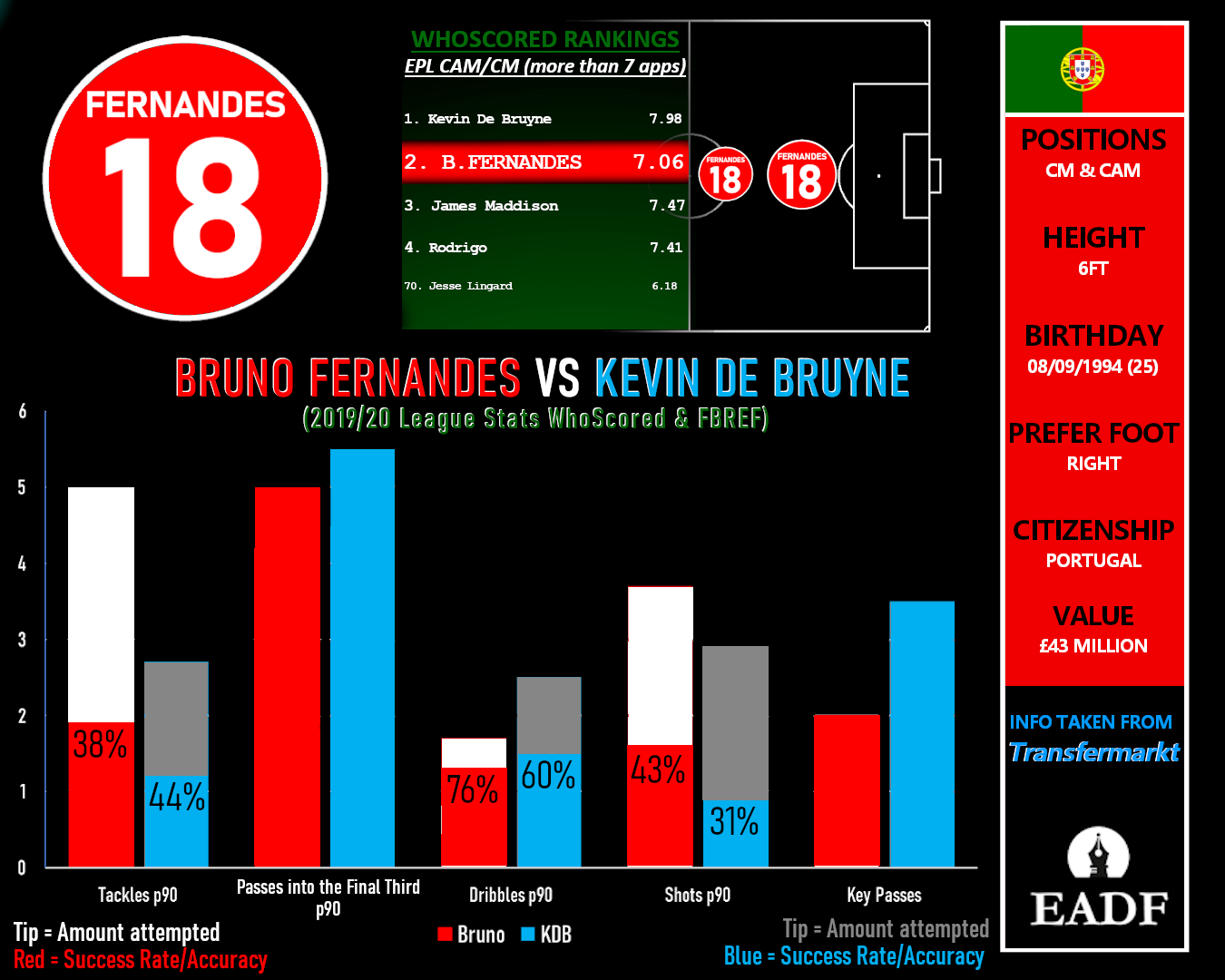 Then we must consider some of the United youngsters that can make a crucial impact next season. Marcus Rashford turns 23 years old in October, and he is currently tied with Martial as United’s top scorer at the time of writing, and he has added 7 assists to the 14 league goals. Twenty-three years old is widely agreed as the age when the human body’s physicality begins to peak, so Marcus Rashford is set to blow up even further next season.

Mason Greenwood is another young attacker who will grow in quality next season and has already scored five goals in just 756 league minutes. When Monaco famously stopped PSG in their continuous rampage of Ligue 1 titles in 2017, over nine players scored more than five goals in the league. Finding so many goals from that many players is vital to a title challenge. If Greenwood can continue his growth in performances and be another avenue for goals, Manchester United will be supercharged.

Finally, looking at the overall age profile of the 23-man 1st team squad, most of the players are in peak condition. Just Juan Mata and Nemanja Matic are outfielders who will be over the age of 30 next season. Thirteen players will be between the ages of 24 and 30. Meanwhile, Aguero, Otamendi, Gundogan, Walker and Fernandinho are all 30 years old or older. City are having to face a rebuild this summer, while Manchester United’s squad is primed for success. 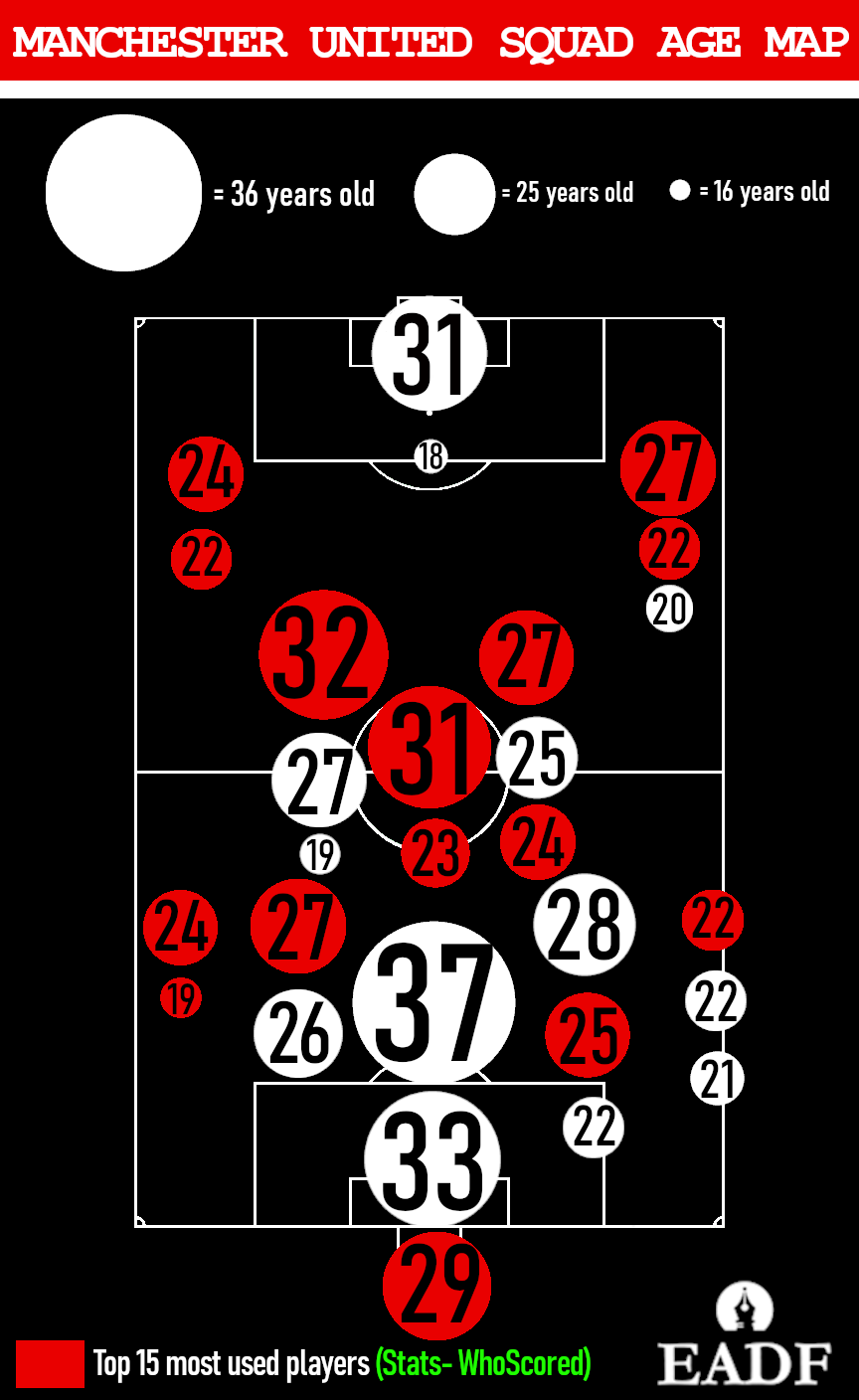 While both sides go into next season as anything but favourites, both Chelsea and United will have the idea of lifting the trophy firmly in the realms of possibility. Add to the fact that the majority of both squads will be trying to impress their national managers to get into their national squads ahead of Euro 2021, and the gap between these two and Liverpool & City could be thinner than ever.