Manchester United kicked off the 2018/19 Premier League season on Friday, August 10th with a 2-1 win against Leicester City at Old Trafford. World Cup winner and new club captain Paul Pogba netted the first goal of the new campaign from the penalty spot after just 2 minutes. Defender Luke Shaw scored his first ever senior goal in front of the Stretford End in the 83rd minute to give United the perfect start.

Leicester City denied David De Gea, last season’s Golden Glove winner, a clean sheet on opening day with Jamie Vardy pulling one back for the Foxes late on in the 92nd minute. United began the campaign under intense fan pressure following a disappointing end to the transfer window. Manager Jose Mourinho looked set to bolster his defensive line-up with the likes of Tottenham’s Toby Alderweireld and Leicester City’s World Cup hero Harry Maguire being linked heavily with the club.

After neither deal went through before the transfer window closed, Mourinho started the new season with a centre-back pairing of Eric Bailly and Victor Lindelöf. This partnership has been long awaited by United fans, with comparisons often made to the successful centre-back pairing of Rio Ferdinand and Nemanja Vidic under Sir Alex Ferguson. 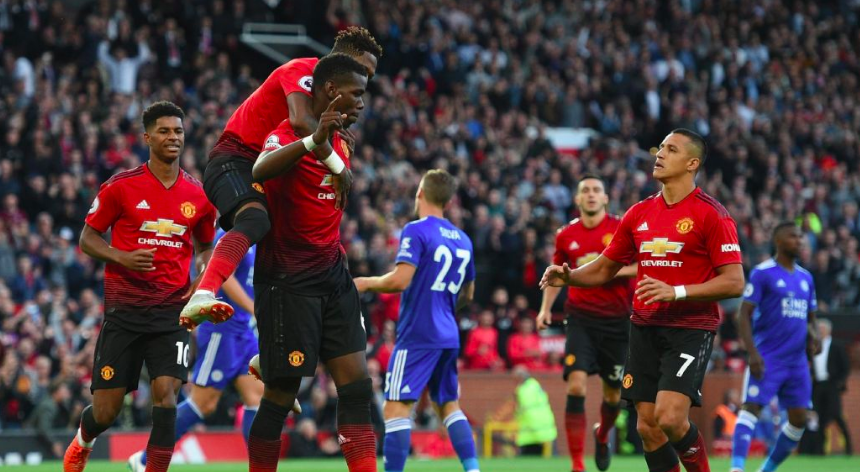 Manchester United’s first away fixture comes at the Amex Stadium against Brighton & Hove Albion on Sunday, August 19th at 8:30 pm IST. The Seagulls began their second Premier League season with a 2-0 defeat away to Watford. Brighton finished 15th in the table last season, ensuring a second consecutive stint in the Premier League under manager Chris Hughton.

With momentum from a winning start behind them, Mourinho and United will look to avenge their shock 1-0 defeat in this fixture at the end of last season. Jose Mourinho stated to MUTV that he expects to be without the services of six players; namely Sergio Romero, Antonio Valencia, new summer signing Diogo Dalot, Marcos Rojo, Ander Herrera and Nemanja Matic; all due to injuries.

There is good news in terms of team selection as well, with Mourinho stating to MUTV, “We have more Pogba, Rashford, Lukaku and Fellaini coming back. Of course, they will be in better condition.” The World Cup returning Reds are sure to play vital roles in this weekend’s match with fitness levels not yet up to the mark for all teams.

A unique club record will also be achieved by Mourinho on Sunday, should United come away with all three points. Back to back victories will make Mourinho the first Manchester United manager to ever win both opening fixtures of a season in all of his first three seasons at the club.

Six points from the first two games could prove vital in United’s attempt to chase down last season’s runaway leaders and cross-town rivals Manchester City. Pep Guardiola’s side won the league with a 19 point gap between them and runners-up Manchester United.

After a convincing 2-0 win over Arsenal at the Emirates Stadium in their opening fixtures, Manchester City now find themselves with a relatively easy run of fixtures. Three of their next five games come against newly promoted clubs Wolves, Fulham, and Cardiff City. Their next fixture against a Top 6 side being on Sunday, October 7th at Anfield vs Liverpool.

The news of a potential long-term absence by midfielder Kevin De Bruyne could be worrying for the Citizens, however, the depth of players at Pep’s disposal could help soften the blow. The full extent of his reported knee injury during training and the expected spell on the sidelines for the playmaker, who finished last season with the highest number of assists at 16, is yet to be confirmed by the club.

With the Premier League back underway, Mourinho and United will look to end their title drought since the retirement of Sir Alex Ferguson. No club has indeed retained back-to-back Premier League titles this decade, with Manchester United being the last to defend their crown in the 08/09 season.

The next nine months could determine whether Jose Mourinho will be given a fourth term as Manchester United boss, and silverware will be the likely deciding factor in the end.