Barcelona under Pep Guardiola set an impossibly high standard for world football. Most people share the general consensus that those group of players that won the triple in Guardiola’s first season in charge was easily the best team in the history of world football.

Time has since passed like it tends to do, and those standards are no longer the measure of a successful team. Now the bar has been set by fierce rivals Real Madrid. Which team now has the audacity and courage to retain a Champions League trophy not once, not twice, but three times? Time will tell.

Amongst the notorious culés, there’s still a core group that believes in the ideals set by Guardiola, Johan Cruyff, and Rinus Michels. They believe in a possession-based system that is influenced by the positional fluidity of Total Football. The pragmatism Ernesto Valverde has brought to this team is often scowled at. A conservative approach can often lead to self-inflicted susceptibility and a loss of concentration, both of which were seen when Barcelona bowed out disgracefully to Roma last year in the Champions League.

Even in the Champions League tie against Lyon, Blaugrana allowed their opponents back into the game, creating unnecessary tension within the confines of the Nou Camp. They eventually killed the game off, adding a bit of gloss to the scoreline, but it was this sense of complacency and failing to finish games off that continues to irk many fans.

We have swiftly arrived at the business end of the season already, and despite Barcelona cruising to yet another dominating league title and a 6th Copa Del Rey final in a row, their season won’t be judged as a success unless they win the Champions League. Some may perceive this assessment as harsh but with Madrid’s two primary forces in Real and Atletico enduring majorly disappointing campaigns, the La Liga has been a one-horse race from day one.

Barca are in the quarterfinals of the Champions League, largely on the merit of their marquee players, Lionel Messi, Luis Suarez, and Ousmane Dembele. In recent weeks, the Blaugrana-blooded Gerard Pique has stepped out of the shadows to show the world why he still is a top defender, despite never getting the plaudits his rival and former national teammate Sergio Ramos does. Partnering him in the centre of defence is a player who before this season hardly anyone would’ve heard of, Clement Lenglet. And it is this partnership at the back that has added some grit and solidity to the back that Barcelona have sorely needed. The Frenchman is a supremely underrated talent and his exploits have quietly, yet substantially propelled Barcelona to be in contention for their third treble in history.

Lenglet’s career began in Ligue 2 with Nancy, but in six short years, his progress has catapulted him to the very top. Earning praise last year during his time at Sevilla, the Beauvais-born centre-half was brought in as a backup for Samuel Umtiti last summer for a measly 35 million euros. While the manner in which transfer fees are judged has experienced an astronomical change, it is important to consider that at 23 years of age and proven potential at a side like Sevilla, the return on investment for Barcelona could indicate a spectacular coup. His performances this season could see his stock rise to double that amount.

Lenglet got his chance this season after niggling knee injuries to his French counterpart kept him out of the team. Questions and concerns were being raised in the media. How will the slight Lenglet replace the imposing and dominating Umtiti and will Barca suffer because of it?

If Lenglet’s consistent, composed performances all season didn’t already convince Barcelona fans, his elbow on Sergio Ramos in the recent derby win certainly did. After seeing an elbow from Ramos on Messi go unpunished earlier in the game, the Barcelona players took it on themselves to deliver some crude form of retribution to the Los Blancos captain. Lenglet led the charge and earned a yellow card for his actions. Ugly? Yes. Primal? Sure. But a trait that all of history’s most celebrated defenders have in common is becoming a master of the dark arts.

It was one of the first times his ‘dark side’ has come out this season. Lenglet didn’t need to resort to it until then. The French defender’s season has flown well under the radar because that is he wants it to be. Another player part of the conveyor belt of French defensive talent, some might say it’s cruel that Lenglet hasn’t yet been called up to the national side. The truth is, he does have the bad luck of being yet another left-footed centre back alongside Umtiti, Presnel Kimpembe, Aymeric Laporte and Lucas Hernandez, while Raphael Varane monopolizes the other position. But such is the personality of Lenglet that it doesn’t seem to bother him.

Lenglet has class, poise, and grace to his game. In contrast to Umtiti’s domineering, aggressive defensive play, the 23-year old never looks like he’s breaking a sweat. His composure on the ball and ability to pick a pass are the reasons why he has cemented his place alongside Pique. The two players are mirrors of each other in their intelligence of the game and ability to play the ‘Barcelona way.’ Standing at 6’1”, Lenglet is not the most physically imposing figure, but this isn’t to say that he lacks a presence at all and with his brilliant ball-playing ability, the former Sevilla man really provides the full package. It is for this reason that Lenglet and not Umtiti has shown that he is indeed the perfect partner for Pique.

The French star has grabbed his chance with both hands and is developing into a fine player, learning from his centre-back partner and improving with every game. He is currently playing his best football and it is in this purple patch that the other side of his personality is beginning to come to the fore. 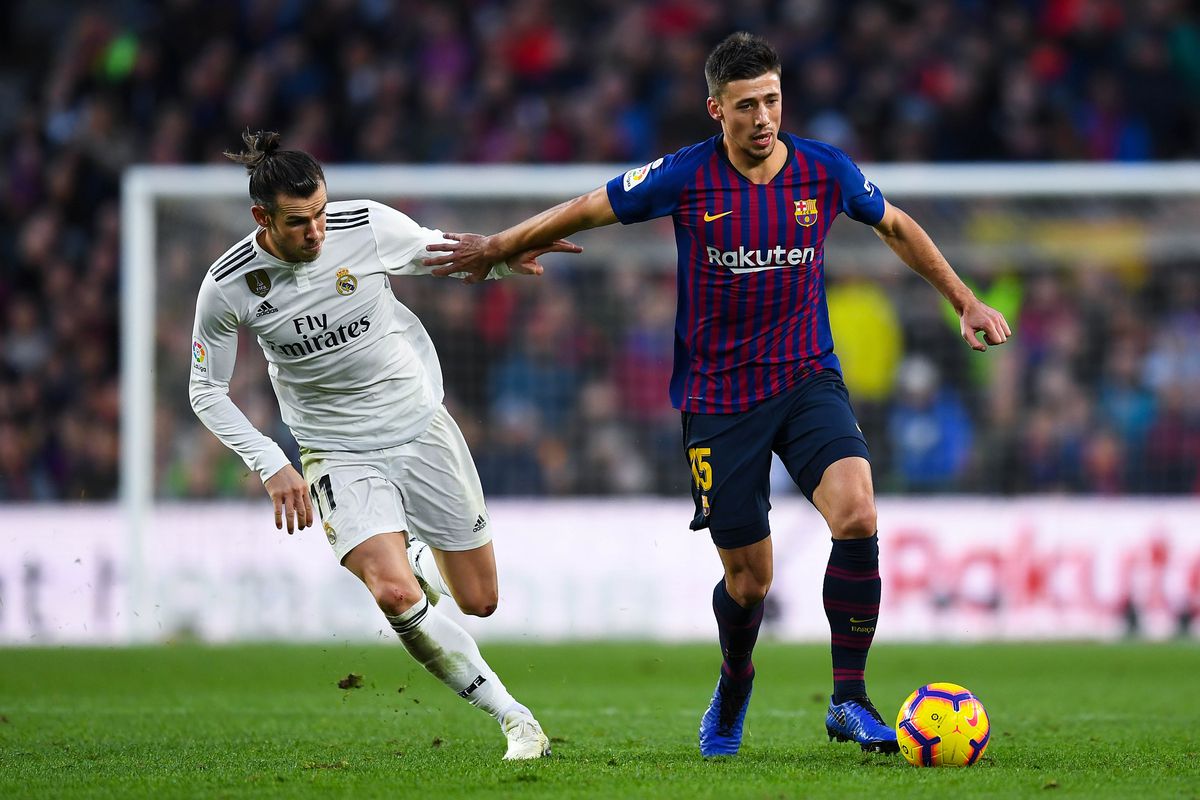 Nothing seems to faze Lenglet; he can pick a pass out despite being pressured by 3 attacking players. But over the last few weeks (especially in the two Clasicos passed), Lenglet’s grit and determination have come forth. His intelligence and talent get him out of jail, but his instincts as a defender push him to make that last ditch tackle with vigour that often saves his team right at the death. There are numerous occasions when it is his perfectly-timed block (something Pique is notorious for as well) that allows the team to regroup around him. Umtiti has returned from injury, but the World Cup winner cannot buy his way into the team because of how consistently good his compatriot has been in his absence.

It’s no surprise that Lenglet’s name hasn’t been churning out news stories in the media. He isn’t a glamorous player and not a big enough superstar for people to exploit him for clickbait. He is surrounded by players who have won it all and are looking to do it again. But it is in the shadows where he will develop. If he can continue to develop his composed, graceful style of play and get a more consistent run-in, it’ll be hard for the France manager, Didier Deschamps to look past him. Lenglet is consistently underrated and will continue to be, but it is this nonchalance to his personality, the lack of desire for the spotlight, and the will to do his job for the team that makes him the perfect Barcelona player.

Nancy image via AS English – Diario AS