Timo Werner lives life in the fast lane. His rise through the ranks into German footballing stardom has been as rapid as his runs towards goal on the pitch. In keeping with this theme, it’s fitting that ‘Turbo Timo’ is ready to take the next big step of his career earlier than most. One look at the way he goes about his business on the pitch makes it clear why that next step should take him to Anfield.

Werner represents the archetypal Jürgen Klopp centre-forward. Intertwined with his red-hot pace is an unerringly accurate right foot in front of goal and silky skill that wouldn’t see him out of place on the wings. This new age striker, a hybrid of winger and old-school number 9, could be a recipe for success in the hands of Klopp, as seen with Mohamed Salah, Sadio Mane and Pierre-Emerick Aubameyang.

Having scored 24 goals for the U-19s in the 2012/13 season, Werner made his debut with his hometown club VfB Stuttgart aged just 17, going on to become their youngest debutant and scorer in his first season. The records kept tumbling as he quickly racked up 50 appearances before his 19th birthday. It was around this time that clubs like Tottenham began expressing their interest in securing the starlet’s services. However, his team was beset by bigger problems, and he couldn’t keep them in the top-flight as they got relegated at the end of the 2015/16 Bundesliga campaign.

14 goals in over 100 appearances for Die Schwaben suggested that all the limitless potential when he burst onto the scene was perhaps being left unfulfilled. Off the pitch too, his fast deteriorating relationship with the manager was there for all to see. In a sensational public outburst, Alexander Zorniger blamed Werner for dropping two points after a 2-2 draw with Hoffenheim. ‘We could have won 3-2, but Werner was so busy blowing kisses to the crowd after his equaliser that he forgot to focus on scoring a winner.’

RB Leipzig took Stuttgart’s place in the top-flight with promotion ahead of the 2016/17 season. They shelled out a then club-record €14million to bring Werner back with them, and it is here that he has nurtured into one of Europe’s finest young marksmen. The number 11 has been good for a steady supply of goals (61 in 114 appearances), whilst also providing the fulcrum for one of Europe’s most exciting attacks.

Where does Werner fit in with the Reds?

Werner has spent most of his time at Leipzig as one half of the strike pair alongside Yussuf Poulsen in a 4-2-2-2 formation. Though Klopp has rarely deployed a two-striker system as Liverpool boss, a Werner-Salah partnership is an enticing prospect. This could also help bring the best out of Werner’s ex-teammate Naby Keïta, who Klopp admits is yet to match his considerable potential after a stop-start debut campaign at Anfield. 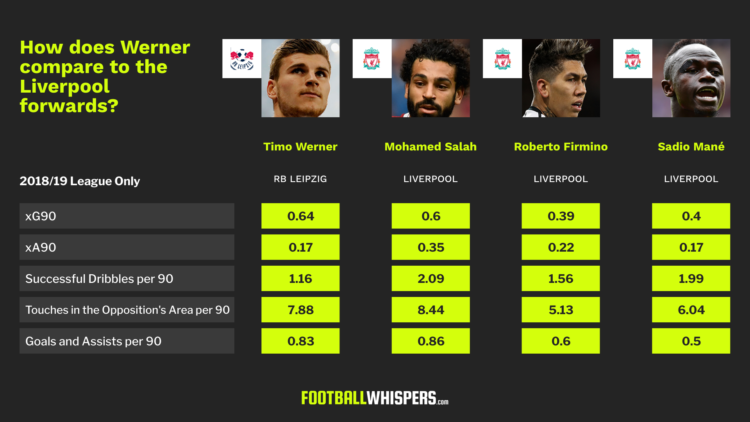 Another iteration is one that Kopites became used to last season, in the 4-2-3-1. With Roberto Firmino slotting into midfield, Mohamed Salah took up the central role position, as did Sadio Mane in a variant of the 4-3-3. Werner would be a more natural fit for that role, allowing both Salah and Mane to take up their regular stations on the wings, where they remain at their devastating best.

Of course, with a busy calendar next season and Klopp’s tendency to rotate heavily, fans may not always see an attacking quartet in action. This will also allow the front three to get some much-needed rest, something they have had in short supply over the last couple of seasons.

According to Klopp, the summer transfer window may not be too action-packed with incomings at Melwood unlikely. However, with the departure of Daniel Sturridge and sales of Dominic Solanke and Danny Ings raising funds, it would be no surprise to see the European champions make an effort to lure Klopp’s compatriot.

Although initially reluctant to entertain the prospect of their striker’s departure, Leipzig have opened the door in the past months. Oliver Mintzlaff, the Global Head of Soccer at Red Bull GmbH (RB Leipzig’s parent company) said, “We want to extend it with him, but he has signalled to us that he would rather not extend. A club like ours cannot afford to have Timo Werner go into a final contract year.”

When Should Liverpool pull the trigger?

With that contract expiring in 2020, the time to pull the trigger on any transfer decisions is fast approaching. And Mintzlaff, looking for top-dollar for his man, has invited bids from across Europe, adding, “We haven’t talked to Bayern Munich about Timo Werner yet. Maybe he doesn’t even want to go to Munich. Maybe he would rather join Tuchel in Paris, Klopp at Liverpool or Favre at Dortmund.”

Read More | From the archive – Who Is Europe’s Next Big Striker? |

While they may still be celebrating their Champions League win, Liverpool now have their sights locked in on what they have long thirsted for. Towards the business end of last season, a stretch of four draws in six games, in which they struggled to break teams down, had them looking for a Plan B that was never there.

With the quality at the disposal of title rivals Manchester City so incredible and margin for error virtually non-existent, that little blip was enough to deny them the Premier League title, taking the wait for the elusive crown into its fourth decade. This time around, extra ammunition in the form of the gunman that is Timo Werner might just be enough to fire them to glory.