“Zinchenko is talented, but he must be realistic. He can only play for Manchester City on his PlayStation.”

Andriy Voronin exhibited a ruthlessness in his early prognostication of the Ukrainian’s spell in the Premier League, one that was earlier reserved for some of the finest goalkeepers in the Bundesliga, during the former Bayer Leverkusen and FSV Mainz 05 striker’s heyday. Voronin is not one to bite his tongue and while the veteran has caught heavy flak for his outspokenness in the past, it was hard to argue with the 39-year old’s rationale.

Signed for a fee of around a region of 1.7 million from Russian Premier League outfit Ufa, Oleksandr Zinchenko, an attacking midfielder by trade was confronted with the gargantuan task of usurping the likes of David Silva, Kevin De Bruyne, Ilkay Gundogan, Samir Nasri, and Yaya Toure; to shoehorn a berth in the standout midfield in the country. While Pep Guardiola is a massive proponent of youth development, first-team football was considered a step too early for the former Shakhtar Donetsk youngster’s raw talents. Naturally, Zinchenko was loaned out to Eredivisie giants PSV Eindhoven for the entirety of the 2016-17 season to gain some much needed first-team football.

Dutch football has established its presence as a breeding ground for harvesting a rich crop of youth prospects in the footballing stratosphere by implementing a plethora of unique coaching tactics and drills that have a history of developing talent into sheer stardom.

However, these methodologies failed to bear fruit as Zinchenko endured a tumultuous time with the Rood-witten (Red and Whites). Restricted to merely four appearances throughout the season, the midfielder was critical of boss Phillip Cocu saying, “I do not understand why I am the one that is never used. It is simply the choice of the coach and it is not to discuss. I will not be sorry.”

After an unsuccessful spell at PSV Eindhoven and stiff competition for places at City, Zinchenko’s story was far from a fairytale. However, the Ukrainian is no stranger to obstacles as he recounted a period where he was forced to train on the streets of Moscow alone, after shifting residence from war-torn Ukraine, during a period of unemployment.

“Before Ufa, I was without a team for five to six months. It was a difficult moment as I had a contract with Shakhtar Donetsk, but it was very dangerous in Ukraine. That is why my parents moved. I just trained every day by myself on the streets of Moscow. Then my manager found Rubin Kazan. So, I went for pre-season with them in Italy.”

While Zinchenko eventually made a move to Ufa in 2014, the starlet had to stick it out at Shakhtar Donetsk for around half a year as an unused substitute. Fast forward to 24th October 2017 and the ex-Karpatiya Radomsyhyl man was in Manchester City’s starting lineup in a 4th round Carabao Cup clash against Wolverhampton Wanderers. Pep Guardiola had displayed his renowned tactical flexibility by deploying the Ukrainian as an auxiliary Left-Back. An attendance of over 45,000-odd citizens was bewildered to witness an encouraging talent such as Zinchenko played out of position in a competition that often sees youngsters hone their skills at the first-team level where opportunities are few and far between.

Unsurprisingly, the Ukrainian cut an unconvincing, tired, and discombobulated figure. At one stage, “Oleks” stopped in his pursuit to chase Ivan Caleiro, leaving Kevin De Bruyne to do the dirty work and the Manchester City faithful arrived at the conclusion that Zinchenko is not a Left-Back.

What was underestimated at this time was Pep Guardiola’s penchant for injecting multi-functional and adaptive qualities into a specific set of players that sees them transform their game to unforeseen standards. The Catalan’s peerless eye for talent enables him to identify players that can fit into different systems and positions. Joshua Kimmich is a prime example of the two-time Champions League winning manager’s discernibleness. Signed as a Defensive Midfielder from Bundesliga club RB Leipzig for Bayern Munich, Guardiola managed to successfully convert the 22-year old into arguably the best Right-Back in the world.
As a result, the ex-Bayern Munich manager decided to ease Zinchenko into life as a first-team player by fielding him in FA Cup and EFL Cup ties against the likes of Leicester City, Burnley and Bristol City, in which the wunderkind repaid his manager’s faith with consistent showings, game after game.

However, it was Fabian Delph’s long-term knee injury in City’s 4-3 defeat to Liverpool that was the turning point in Zinchenko’s time at the Etihad Stadium. He was handed a full Premier League debut against Newcastle United in a 3-1 triumph which saw Sergio Aguero score a treble past a hapless Magpies defence.

With 139 touches, the most out of any player on the pitch in the match and a pass completion of 97%, Zinchenko grabbed his opportunity with both hands.

Guardiola was quick to heap praise on the teenager’s first outing, saying “In the first half, he was outstanding. We cannot forget he is a No. 10 or 11. We insisted he was aggressive in the duels and look how well he defended.”

While fans and experts alike expected Danilo to be deployed as a Left-Back, a Champions League-winning defender who possesses plenty of experience under his belt during his time at Real Madrid, Pep Guardiola trusted his instincts and continued to start Zinchenko. The manager’s unshakeable confidence cannot be questioned as it was his decision to convert Fabian Delph into a Left-Back after Benjamin Mendy’s season-ending anterior cruciate ligament injury(ACL) that has enabled the former Manchester City outcast to be on the plane to Russia as a part of Gareth Southgate’s England squad for the World Cup in under a month’s time after producing consistently eye-catching performances that would make any viewer believe the Englishman is a seasoned Full-Back.

Zinchenko was thrown into the deep end with starts against Arsenal and defending champions, Chelsea. However, the 21-year old’s unique sense of positional intelligence, ball-playing abilities, and decision making are qualities that add further evidence to one of Europe’s most discussed youngsters.

Forming a trident with David Silva and Leroy Sane, the trio were especially prolific against Arsenal in a 0-3 win at the Emirates stadium where two of the three goals came from the left-hand side. Similarly, against Chelsea, the youngster managed to pocket one of the league’s most lethal wingers in Willian and constantly engaged in one-two’s with Ilkay Gundogan and Kevin De Bruyne, creating dangerous triangles in the centre of the pitch. This was not the Ukrainian’s isolated showing of defensive durability against top-class opposition, as Oleks pocketed Riyad Mahrez in a Claudio Bravo-inspired victory over Leicester City in the Carabao Cup.

When precocious talents have the tendency to go haywire after a life of overnight fame and money, Zinchenko is one who does not succumb to such temptations and cuts no corners in his quest to become a true master at his craft. Pep Guardiola revealed the Ukrainian international’s exceptional levels of dedication in a post-match press conference in late November in a tie against Huddersfield in which he recounts,

“We arrived back from Huddersfield on Sunday night after the game and he stayed to train in the gym alone. That means a lot to me because sooner or later he knows we are going to need him. He is a talented player, so clear, so clean. The way he plays, his decisions are always perfect. As a young player, I hope in the future he will help us.”

Zinchenko’s goal-driven mentality is a true embodiment of retired UFC Heavyweight Champion, Bas Rutten’s most notable quote which reads. “A true champion is one who sweats from exhaustion when no one is watching.”

The 21-year old cites midfield general, Fernandinho as his idol for his versatility and resilience to recover from a serious injury layoff in 2010 in which several doctors had diagnosed an end to the Brazilian’s professional career, during his time at Shakhtar Donetsk. However, the Brazilian international trained with the youth team for around eight months and has cemented his position as one of the most sought-after No.6’s on the globe. A fellow Russian speaker, Fernandinho often provides key tips to Zinchenko to further sharpen his understanding of the game.

A keen student, the young buck accepts his defensive shortcomings in a post-match interview in which he says, “I made a lot of mistakes, but I am still learning. But, it was more important for me that we won.”

The youngster is a precocious talent. However, it must be acknowledged that he is not the finished article, and must focus on aspects such as defensive discipline, one on ones, acceleration, and physicality, to bolster his capabilities.
While Zinchenko’s summarization of his own performance was particularly harsh, it was fresh to witness such honesty and willingness to improve from a footballer with the advent of media training in the sporting world. 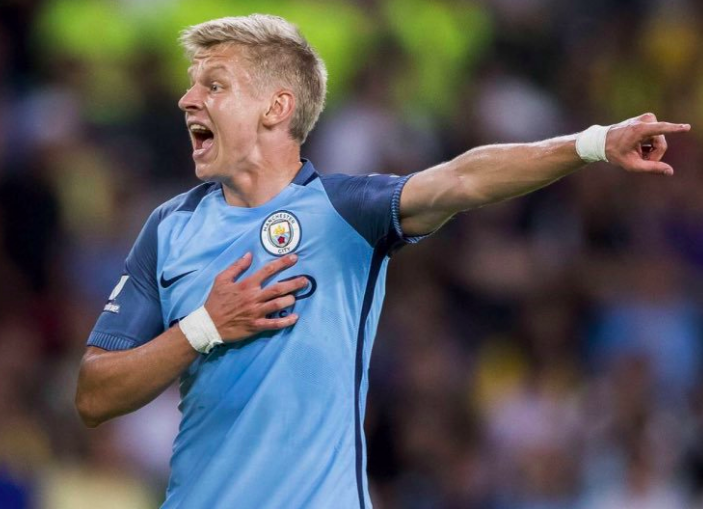 Pep Guardiola has been exemplary in handling Oleksandr Zinchenko’s progress. While the Spaniard has been working in close quarters with the young Left-Back alongside assistant coach Mikel Arteta, he has not been guilty in exposing the former Ufa man to situations that are way too big for his boots. While starting Zinchenko against Arsenal and Chelsea may disprove this fact, the Catalan has also rested him for games such as the Champions League and Premier League defeats against Liverpool and City’s calamitous loss in the potential title clincher at Old Trafford against rivals Manchester United.

With Fabian Delph returning to full fitness and Benjamin Mendy being eased into first-team football again, Zinchenko has taken a backseat for the time being. After all, this was the Ukrainian international’s first full season in the Premier League and therefore, it was important to use his services sparingly. However, this does not take away from the fact that the youngster is in Pep Guardiola’s plans for the 2018-19 campaign and beyond.

If Oleks Zinchenko had been told in 2016 that he would be at the forefront of Manchester City’s title celebrations and become a key figure in the Premier League’s first team to reach a 100 points, he would have checked if the date was April 1st and had a slight chuckle. However, life has a funny way of working out when you start to believe it never will, much like the Premier League title not breaking into pieces when the Ukrainian bumped into it when emotions got the better off the Manchester City squad while giving “Uncle Yaya” the send-off he deserved during a series of ole’s and pats on the Ivorian’s head.