By Karan Tejwani | This article was first published on Football Chronicle on January 28, 2020

When you think of Brazil’s Ronaldo, you think of the goals, the greatness of the UEFA Cup final in 1998 and the World Cup disappointment of the same year, the resurgence of 2002, the storm he created for opposition defences in Spain and Italy and, of course, the Ballon d’Or honours that he rightly deserved each time he won it. In many opinions, Pelé is the only Brazilian footballer who can outdo his legacy and he was in touching distance of being the greatest ever had it not been for his knee issues.

Nevertheless, Ronaldo forged a career worthy of being considered amongst the game’s all-time best. Before his time to shine came at Real Madrid, Inter Milan, Barcelona and PSV Eindhoven, however, he made a name for himself at home at the start. In his single full season as a professional with Cruzeiro, he broke records and made history at a young age and gave birth to the fenomeno.

Like most young children in Brazil, Ronaldo grew up with a ball at his feet, playing whenever he got the chance to. Unlike many young children and aspiring footballers in Brazil, however, Ronaldo’s story wasn’t embroiled in poverty. He lived a middle-class life and had enough money to support a path into football that’s clearer than most youngsters have.

Raised in Bento Ribeiro, a town about an hour away from central Rio de Janeiro, Ronaldo lived a good life, but at the age of 11, his parents separated. To support her son, his mother worked 12 hours shifts in a luncheonette, earning just a little over the minimum wage. Ronaldo, however, was captivated by football – this was his life and from those days, it was what he wanted to do when he grew up.

Much to his mother’s anger, he skipped most of his classes in order to play the sport and just after year seven, he quit school altogether to focus on football full-time. Naturally, his mother was disappointed, and in 1997, when speaking to O Globo, she recalled: “I could not accept the fact that my son thought only of playing soccer. What kind of future would he have? I always found him on the street playing ball with friends when he should have been in school. I know, I lost my battle.”

Her battle was lost, but while there was tension in her mind, in Ronaldo’s, there was just one aim: to make it to the very top. Growing up in the ‘80s, he idolised Zico and his glorious Flamengo team that conquered South America and then the world. Being so close to home, his dream was to play for them. He was even offered a trial for them once and did well but could not afford the bus fare to go back when he was called for a second try-out the next day. 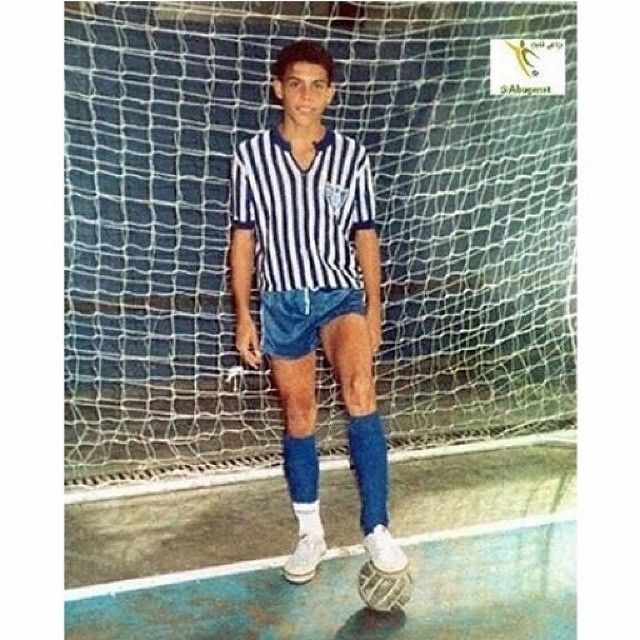 Ronaldo’s journey began at the Social Ramos Athletic Club’s futsal team, which covered basic necessities like a meal, travel costs and a pair of boots. There, he showed his talents and did what he did best: score goals like no other. One game had him scoring 11 of his team’s 12 goals – something to catch the attention of anyone.

From there, he moved to the more advanced São Cristóvão, a club from the suburbs of Rio de Janeiro. There, he garnered more attention and even put in another excellent virtuoso performance when he scored five goals in a 9-1 victory for his team as a 13-year-old. At the age of 14, agents Alexandre Martins and Reinaldo Pitta recognised his potential and purchased his players’ pass for $7,500. These two agents had 67 senior footballers on their books, so to snap up an aspiring teenager was a testament to the player’s talents.

The reviews surrounding him were all positive and everyone was keen on this excellent talent. When the time came for him to go professional, Cruzeiro snapped him up in 1992 for a fee of $25,000 – a huge amount for a player who was still only 16.

His futsal days helped him greatly to reach this point. A gifted footballer on the indoor ground, it helped build his physicality and strength as well as improving his speed. Throughout his career, his quick bursts of pace, ability to breeze past defenders with the ball and drive to stay a step ahead of the opposition were evident traits of a forward so well-versed.

One would imagine that moving to a big club like Cruzeiro at a young age, Ronaldo would take a few months to make his way through the squad, but that wasn’t the case here. He was, after all, a phenomenon.

Right from the off, he hit the ground running. His debut came on 25 May 1993 in a game no one thought much of. There was just a little over 2,500 fans attending, but those fans didn’t know they came to watch the first game of a legend. The forward didn’t get on the scoresheet – and it wasn’t until three months later that he did in a friendly tournament in Portugal – but there was interest in what he did on the ball.

Belenenses were the first victims in the pre-season friendly as Ronaldo scored a firm, cushioned header to open his account. From there, the goals never stopped. Whilst impressing in Portugal, he reportedly caught the interest of Italian clubs, notably Internazionale, who offered to pay $500,000 to acquire the player’s services. Whilst it seemed like a big fee for a player far away from even entering adulthood and who had hardly played senior football, there was reasonable eagerness to get him in early before his value skyrocketed. 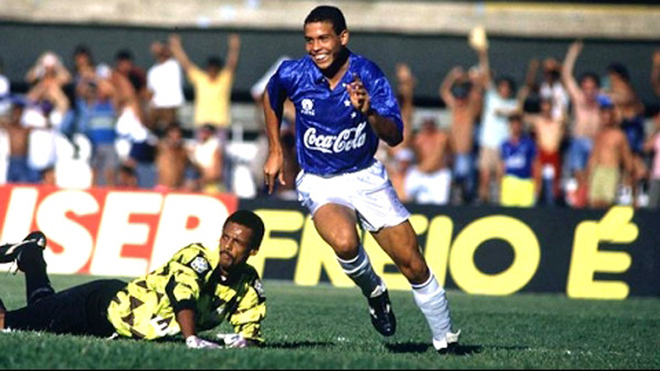 In November that year, he became the first player in the club’s history to score five goals in a single game as his Cruzeiro team beat Bahia 6-0. The goals were an early indication of what he was all about.

Two well-taken penalties – one each on either side of the net; one trademark feint to round the goalkeeper and finish into an empty net; one show of strength to beat a defender and calmly slot past the goalkeeper; and then the fifth, a cheeky one as he stole the ball from the resting, careless goalkeeper and passed into the empty goal. He even created the sixth goal, involving himself in all the goals that were scored that afternoon and telling everyone who he was.

But while success was coming thick and fast, heartbreak was around the corner. In the Recopa Sudamericana – the match-up between the winners of the Copa Libertadores and Copa Sudamericana, in this case, São Paulo and Cruzeiro – Ronaldo would face the heat. After two goalless encounters, the match would go to penalties to determine a winner, where Ronaldo would miss his spot-kick as São Paulo would go on to win. A learning curve.

Later in March of 1994, he added another signature performance to his growing record. Away at Atlético Mineiro, he would net a hat-tick. Once again, this was another show of his composure and if Brazil had taken notice after his first performance against Bahia, the world had started to pay attention after this one. Two goals from crosses and one penalty – which he won himself – completed the triplet and it was yet another game to remember.

His great displays weren’t just restricted to Brazil. A month after his hat-trick in Belo Horizonte, he put on an iconic display against Boca Juniors in the Copa Libertadores. It was a goal of remarkable quality, having received the ball in midfield, he took on three defenders, beating them with his speed and swift dribbles before rounding the keeper – something that was becoming all too familiar with him – to score. It was a goal of the highest quality and another indication that even the biggest of stages don’t trouble him.

The age and obvious talents drew comparisons to the great Pelé, and perhaps rightly so. At such a complex part in life, Ronaldo took the pressures of top-level football and made a mockery out of it, scoring goals at will and spreading his name like wildfire. When Pelé was 17, he starred at the World Cup in Sweden and for Ronaldo, having scored an unbelievable 56 goals in 58 matches for Cruzeiro, there was no doubt that regardless of his young years, he would be on the plane north to the United States for the World Cup.

However, just before that, he added the first trophy of his career: the Copa do Brazil was the first silverware in a career that was set to gleam with it. Then came the World Cup, and this was where the differences between Pelé’s career and Ronaldo’s started to show. While Pelé was the golden boy in 1958, Ronaldo was there as an alternative. The great number 10 scored six goals, including two in the final, as Brazil went on to beat Sweden at their home to win their first World Cup, but Ronaldo’s story 36 years later was different.

In the final against Italy, Ronaldo was a spectator. From the stern 0-0 to the divine ponytail’s unholy miss in the shoot-out, Ronaldo could just sit. Perhaps this wasn’t a time for teenage superstars. Twenty-four years since their last World Cup success, this was a time for Brazil’s blistering attacking talent to get the job done. The likes of Romário, Bebeto, Mazinho and Zinho all took up places ahead of the 17-year-old, but there was learning. Sharing a dressing room of champions with storied careers can teach, as Ronaldo would go on to carve his own World Cup legacy in the editions that were to come.

In one season at Cruzeiro, Ronaldo went from teenage prodigy to international superstar. He was the top scorer of the Copa Libertadores, netting eight times, and picking more experience than most would’ve expected.

He was sold to PSV Eindhoven for an astounding fee of $6 million and from there, he had the world on his feet. Record transfers, Ballon d’Or honours, the World Cup’s greatest goalscorer, another World Cup medal, the knee injuries, the redemption of 2002, the greatness. Cruzeiro laid the foundations for one of the best footballers of all time, and Ronaldo just built on it as he was expected to do.