You are here
Home > Originals > The Championship’s Hidden Gems 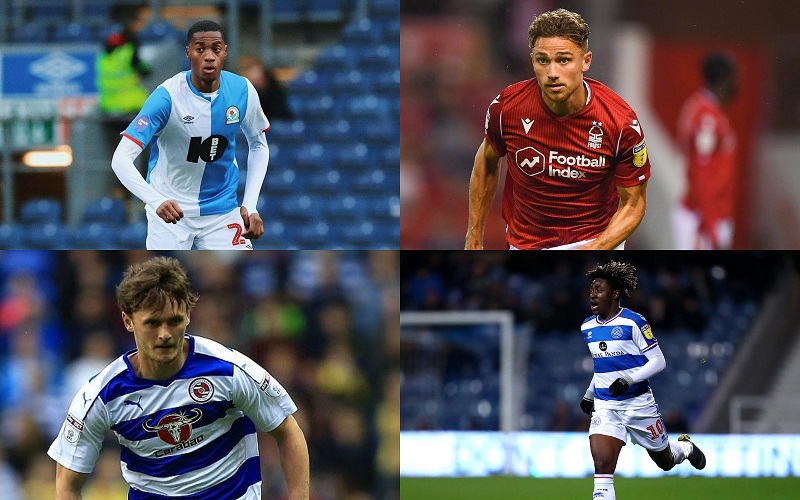 The Championship is a league with about as much predictability as British weather – combine that with its physical, high-intensity nature and you have one of the most intriguing, entertaining divisions in world football. This season has seen several individual breakout campaigns up and down the table; from the promotion chasers to relegation favourites, almost every team has its promising young names to watch out for.

Whilst players at the big sides – Ben White, Saïd Benrahma and Matheus Pereira to name a few – have been rightfully lauded for their incredible performances, there are plenty of names from teams outside of the Championship’s top six who could be ready to make the step up to the big leagues. Let’s take a closer look at some standout performers this season.

Having first burst onto the scene at Nottingham Forest as an exciting midfield prospect, Matty Cash’s switch to a right-back role this season has caught the attention of several top-flight outfits.

A shining example of the modern-day full-back, Cash poses a constant attacking threat down Forest’s right-hand side. In possession, Cash pushes up high to create width and contributes to counter-attacks with his dribbling and link-up play.

The 22-year-old has proved a crucial part of Forest’s attacking unit throughout the campaign, contributing 3 goals and 5 assists from the right-back position. He has averaged 1.1 key passes per game – the third-highest average on Forest’s side behind creative midfielders Joe Lolley and Tiago Silva. 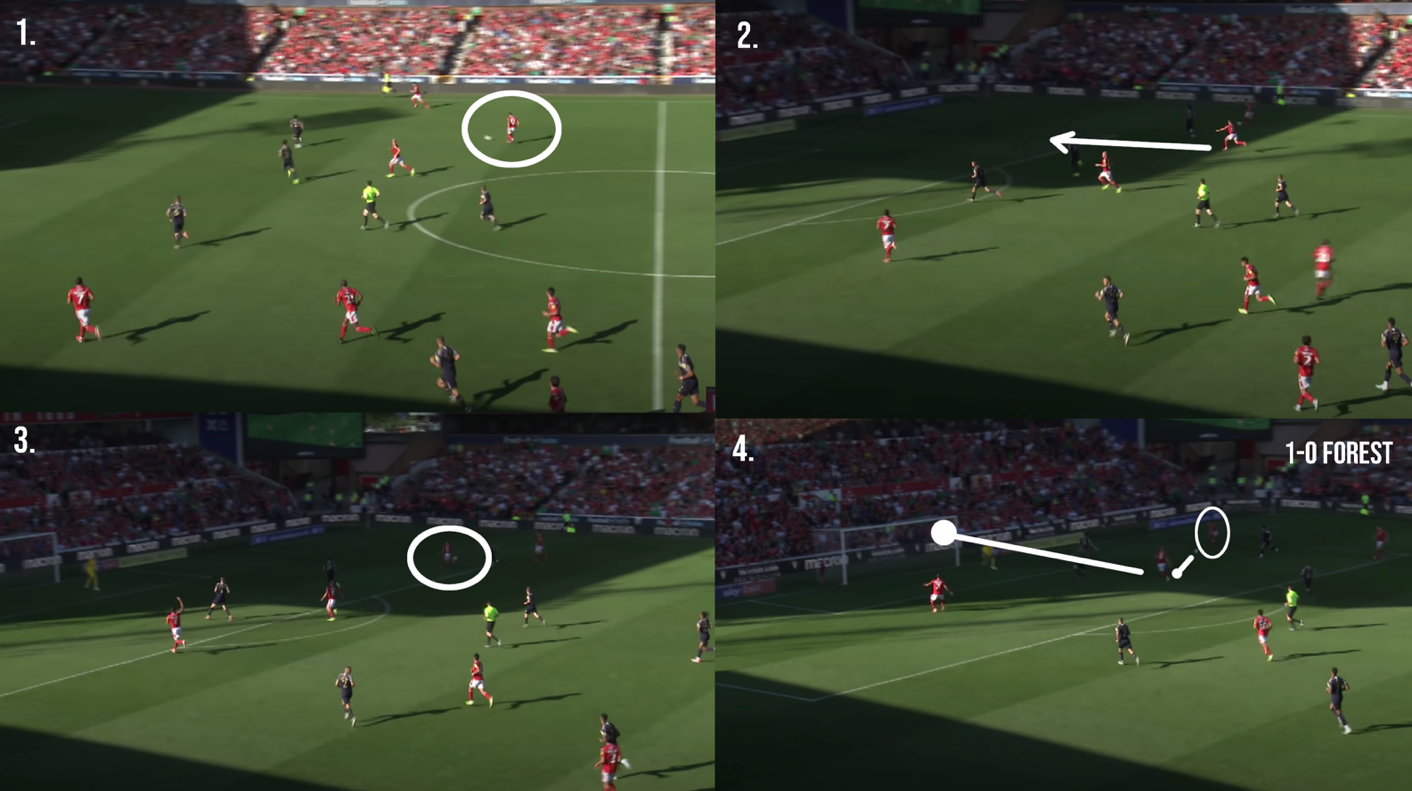 Forest’s defensive lines retreat into a deep block after ceding possession, and so the responsibility is placed on the full-backs to mark opposition wingers and defend diligently until a counter-attacking opportunity arises. Cash has excelled at this role and has put up highly impressive statistics off the ball – he ranks first amongst all regular Championship full-backs for successful defensive actions per 90 and 2nd in possession-adjusted interceptions per 90. Cash’s defensive contribution has been highly important for Lamouchi’s system, which saw their defence concede just 50 goals in 48 games – the 5th best record in the league.

The phase of play above showcases Cash’s off-the-ball movement and his quality understanding with Forest’s wide midfielders. After passing forward to Lolley on the break (1), Cash underlaps, driving into the half-space between Barnsley’s defensive line (2). Lolley has pulled away the full-back, which gives Cash plenty of space to receive the ball (3), where he plays a brilliant cut-back to Watson, who puts away the goal (4). Cash’s positional change has been revolutionary for the youngster, and given that he is still improving in his new role at 22, there is every chance of him making the jump up to the topflight within the next year.

Box-to-box midfielder John Swift has recently attracted attention from Sheffield United and Aston Villa following a stellar 2019/20 campaign at the Madejski Stadium. In a middling Reading side, Swift has been by far and away their most important player, contributing 6 goals and 10 assists from the middle of the park – the second-highest assist total of any central midfielder in the league.

Capable of playing in defensive, central and attacking midfield roles, Swift is a highly versatile midfielder with a tendency to break forward and carry the ball into dangerous areas. He has proven to be extremely press-resistant – a skill that is extremely valuable in the Premier League, where teams are more inclined towards pressing opposition higher up the pitch. It comes to no surprise that the likes of Chris Wilder and Dean Smith have taken an interest in the 25-year-old – a hard-working midfielder possessing Swift’s technical acumen is very hard to come by.

Swift’s weakness lies in his defensive game, where he often relies on a more combative midfield partner to cover for him in transitional play. This becomes less of an issue when Swift is playing as the most advanced player in a midfield three and has more freedom to disrupt midfield lines with his immense dribbling and playmaking abilities. Swift’s offensive skillset would mesh perfectly into a system such as Sheffield United’s, where the likes of Oli Norwood and Sander Berge are comfortable playing deeper behind the attacking unit.

With Reading struggling financially, they may be forced to sell their prized asset in order to balance their books, which could see Swift on the move for less than £10m. This would be a shrewd piece of business for a Premier League side looking to bolster its midfield ranks for the coming year.

The case of Tosin Adarabioyo is an interesting one, with the 22-year-old rumoured to be opening contract talks with Manchester City following a highly successful loan spell at Ewood Park. The imposing centre-back became a Blackburn fan favourite after just a single season, and there is talk of the youngster having a role to play in Pep Guardiola’s system, having been at the club since the age of 5.

Over his 32 starts at Ewood Park, Adarabioyo forged an impressive defensive partnership with the ever-present Darragh Lenihan. Out of all Championship centre-backs with 2,000+ minutes played, he ranked 3rd in defensive duel success rate (75.8%) and aerial duel success rate (69.54%). Although he stands at 6 feet and 5 inches tall, Adarabioyo is far from the hard-nosed, brutish centre-back archetype that many associate with the Championship; he is extremely confident on the ball and provided Blackburn with a reliable means of playing out from the back.

Adarabioyo’s composure and finesse perfectly complement his physical acumen; last season he averaged 49.6 passes per game – the 3rd highest of any first-team Blackburn player – with an 80% success rate. However, his passing numbers do not reflect a series of simple, ‘play-it-safe’ passes – Adarabioyo regularly helps to progress play through the opposition lines. Averages of 19.98 forward passes per game and 76.2% forward pass completion both rank 8th amongst Championship centre-backs. As shown in the figure below, Adarabioyo stands amongst the likes of Tim Ream (Fulham), Liam Cooper (Leeds) and Ethan Pinnock (Brentford) – all ball-playing defenders in notoriously possession-based sides.

Adarabioyo’s biggest weakness is his decision-making, both in and out of possession. He sometimes lacks bravery in the air and can overcommit himself to ground duels, which can sometimes result in him losing important battles to more technical opposition. Though he possesses a quality passing range, he does not always choose the right team-mate to pass to, which has occasionally lead to Blackburn turning the ball over in their own half. The latter point is due in part to the amount of time he sees on the ball as a defender, and with more senior experience we should see these irregular mistakes ironed out in the near future.

It is difficult to predict where Adarabioyo will be playing come the end of the transfer window, but given the quality of last season’s performances, it is hard to see him settling for anywhere less than a promotion-chasing Championship side. A loan to another Premier League team could also be on the cards, with Everton reportedly interested in him if they fail to land a more experienced centre-back. Whether Pep will give him a chance at City remains to be seen, but things are certainly looking up for the young Mancunian.

A name that fans of many Premier League clubs may already be familiar with, 22-year-old playmaker Eze has emerged as one of the most coveted Championship youngsters this summer following a meteoric rise through the ranks at QPR. Valued at around 20 million pounds, it will cost a lot to pry the England U21 international away from Loftus Road, but such a fee represents very good value for a player with a mountainous upside.

A highly intelligent midfielder, Eze occupies somewhat of a free attacking role at QPR and is capable of playing as a winger, a number 8 or a number 10 depending on the game situation. He possesses excellent tactical and special awareness, dropping into dangerous areas where he can carry the ball forward and create chances. Though he is by no means a high-volume passer (recording just 37.5 passes per game), Eze frequently turns his possessions into high-quality chances, having contributed 33% of QPR’s 67 goals last season, scoring 14 and assisting 8.

One of a select few outfield players to have started all 46 of his Championship games last year, Eze attempted 6.52 dribbles per game with a success rate of 56.96% – the 8th highest for midfielders in the league. Achieving this output over a 46-game season is no mean feat, and is a testament to Eze’s durability and fitness as well as his technical ability. Below is an overview of Eze’s outputs on the ball, which further highlight his impact on the ball:

Interestingly, Eze’s dribbling and progressive running outputs are not particularly high when compared with other Championship wingers. This is not an indication of underachievement – if anything it reflects just how efficient Eze is when he receives space to move into. His true limitations lie with his defensive contribution and lack of stature – though he is often positioned higher up the pitch to spring counterattacks, so it is not completely fair to criticise him for this.

Arguably too good to stay another season in the Championship, it is only a matter of time before Eze is picked up by a top-level club. A recent £10m bid from Crystal Palace was swiftly rejected by QPR, but with Palace and London rivals West Ham and Tottenham in need of creative wide players, we could see Eze moving across the capital sooner than later.