You are here
Home > Opinion > Do teams still fear playing at the Bernabeu? 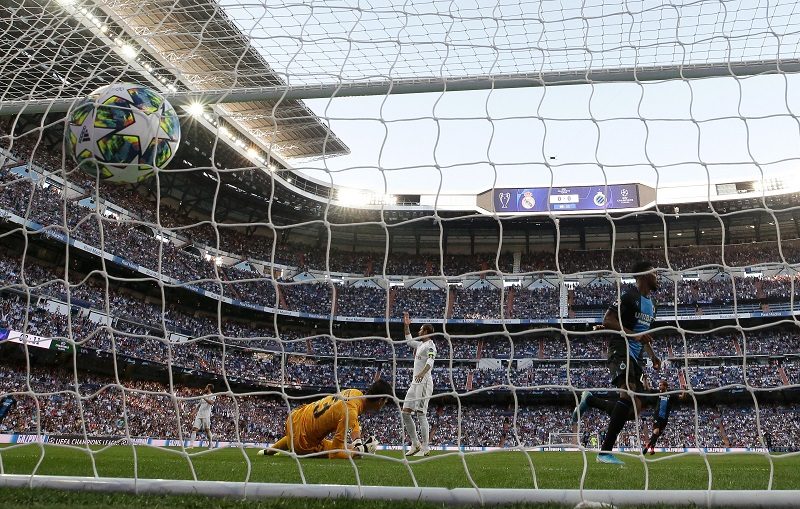 The fortress which is home to 13 Champions League titles, 33 La Liga titles and several other titles won by the club used to frighten anyone who would come to play there to face Madrid. Whilst there have been a few underdogs coming and winning at the Bernabeu in La Liga over the past 5 years or so, it has been very difficult for weaker oppositions to come and upstage Madrid in the Champions League, but even that has been changing since the start of the 2018/19 campaign.

Santiago Bernabeu’s dimensions are 105 m × 68 m (344 ft × 223 ft) and it was opened on the 14th December 1947 and renovated twice (in 1982,2001). It has hosted both the UEFA Euro final and the FIFA World Cup final. Its big size facilitates long diagonal passes and compels wingers to drop from their natural position to one that is narrower leaving the number 10 and full-backs to bomb forward. When the Zidane era started, this changed because he knew the value of the gem he had in Cristiano Ronaldo, and took advantage of that to play with intensity more than using the head, like Johan Cruyff would have preferred.

This strategy focuses so much more on counter-attacking and can easily backfire. It’s very misleading as it makes midfielders play a role more superior than their natural one and causes some chaos in crucial defensive areas. A deep-lying playmaker is needed in this case to specialize in ball-playing skills rather than having defensive skills like tackling. This player attempts longer and more complex passes than other holding players. Zidane tried Toni Kroos for this as he had all the qualities a complete deep-lying playmaker should have. And he actually managed to pull it off. He didn’t like the role at first, but later adapted to it.

Teams like Levante, Leganes, CSKA Moscow dominating us at our own soil is no surprise. One quick ball and a rapid run on the wing could easily lead to a goal created by the opponents. It’s that simple. Cristiano’s dizzying on-ball skills and dribbles distracted opponents who focused their efforts on trying to defend him, the left-back and striker. This gave Cristiano very little space to work with but it created some feeling of relief in midfield as they had acres of space ahead of them. Now that he isn’t here to do that, that feeling of the missing piece in the puzzle really affects Real Madrid. However, Eden Hazard was bought; to perform this very role at Real Madrid. It will be interesting to see if or when Hazard is able to perform this role to his best ability if Zidane sticks to this tactic

It’s not safe. There’s going to be a point where Real Madrid will have to create a new strategy to avoid embarrassment, shame and to save the club’s profile as one of the most elite clubs in Europe. Van de Beek is a player needed. His strong decision making and vision makes him decisive when needed the most. If Madrid can’t decide the game through the wings, they must do something from the center. He can also drop between the lines to retrieve the ball and help with the build-up play. These small crucial and important facets of play should be studied by the board when deciding on players to go for. His positional awareness would help our midfield during crucial situations such as counter-attacks.

I expect Valverde, to play this role at the midfield if Van de Beek isn’t bought. I believe he’s got all the qualities of an elite midfielder. He just needs support and faith to develop them up.

The midfield issue could be resolved with more deep-lying midfielders than attacking ones. Some think buying players like Pogba and Eriksen would be the best way to execute Zidane’s strategy. Well, it would be a great marketing activity, but on closer analysis, it wouldn’t make that big of a difference on the pitch. I’m disappointed Real Madrid released a hot Castilla prospect like Dani Parejo. He and Toni Kroos would have been a great deep-lying playmaker to keep the ball moving while not affecting possession and still playing with intensity as Zidane desires.

Barcelona used their big pitch as an advantage to make their rivals make longer runs which makes it easier for them to mark with fluidity in defense and use their very own Sergio Busquets to keep the ball in play. This has made Barça successful over the years, as they are used to playing a slow tempo which benefits them to execute this strategy. The atmosphere when playing at the Camp Nou is unique as it’s a very big stadium with a very big capacity and their home fans are really supportive.

These days it’s pretty quiet playing at the Bernabeu in La Liga. The fans seem bored and the atmosphere is pretty dull. In the Champions League, it’s a bit hyped because we face an unfamiliar opposition from a different league so the differences make it unique. And it’s a better feeling playing with intensity in the Champions League. Perhaps having players like Sergio Ramos or Karim Benzema scoring the winning goal brings so much more excitement at the Bernabeu because they are considered as living Real Madrid legends after everything, they’ve done at this club.

Playing at the Bernabeu has become no man’s fear, as Madrid have been seen struggling and dominated at their own soil by, with all due respect, inferior teams from across Europe. Players are often seen getting emotional or hyped after scoring at the Bernabeu knowing the feeling of scoring at such a prestigious stadium. Zidane needs to be given time to fix this rot and I think if we make smart signings in the transfer market, we won’t be far away from making Bernabeu a fortress again.