Tactical Analysis: How Real Madrid triumphed against Liverpool with their individual brilliance

A first exclusive by Anas Ali

It was a night full of tears and heartbreak for the Liverpool fans, as Real Madrid secured their third consecutive Champions League triumph with a fairly comfortable 3-1 win against the Premier League giants.

Real Madrid, with all their experience, once again emerged as the better side against a hapless Liverpool, who were decimated by the injury of Mohamed Salah in the first half. While two hideous mistakes from Loris Karius virtually gifted the Spaniards their 13th European triumph, an absolutely stunning goal from Gareth Bale made sure that Sadio Mane’s equalizer remained as only a consolation. But how did these two teams stack up against each other from a tactical perspective?

There weren’t any surprises in the team lineups from either of the two sides.

Liverpool started with their traditional 4-3-3 formation, banking on their attacking trio of Sadio Mane, Mohamed Salah, and Roberto Firmino to catch the opposition on the break.

Zinedine Zidane, on the other hand, opted for a similar 4-3-3 formation, which had the tendency to transform into a 4-4-2 during the course of the game. Gareth Bale was left out of the starting eleven, paving the way for Karim Benzema to lead the Real attack alongside Cristiano Ronaldo.

While it was clear that neither of these two sides were ready to pioneer any tactical surprises, Real Madrid were always deemed as favorites not just for their individual superiority, but also for their seemingly unbreakable formation.

In the first 15 minutes or so, the game seemed to pan out exactly the way Liverpool would have wanted. The Reds were the more energetic team, often looking to make use of their front three to wreak havoc in the Real Madrid defense.

The relentless pressing in the offensive zones from the Liverpool front three meant that both the Real Madrid Full-Backs had to remain in a slightly deeper position than usual, in order to support their central defenders. This lead to Liverpool gaining numerical advantage in the wider positions with both Andrew Robertson and Trent-Alexander Arnold pushing forward.

While James Milner and Gini Wijnaldum protected the half spaces on either side very carefully, the onus was on Jordan Henderson to clear out any loose balls in his arc, and also to cover the defensive line.

However, the Premier League giants suffered a huge blow when Mohamed Salah sustained an injury just after the half hour mark. The Egyptian wizard suffered a dislocated shoulder during a challenge with Sergio Ramos, which left him in tears as he was subbed off for Adam Lallana.

Lallana’s introduction proved to be detrimental for Jurgen Klopp’s men as it not only minimized Liverpool’s dynamism in the final third but also made them less effective in pressing situations. This eventually lead Real Madrid to be much more fluent in their build-up game, despite losing Danny Carvajal in the first half.

Real Madrid took no time in transitioning to a 4-4-2 formation. The extensive pressure from the front three and midfield from Liverpool forced Isco to move in centrally, alongside Casemiro, while the two midfielders in Toni Kroos and Luka Modric went into a slightly wider midfield position.

With the absence of any naturally gifted winger (no Bale or Vazquez in starting XI) in the Real Madrid setup, the Spaniards failed to create many chances from high turnovers or counter attacks.

Rather, it was down to the sheer brilliance of their defensive players, which played a huge role. Sergio Ramos, in particular, showed phenomenal technical qualities to adhere the role of a ball-playing Centre-Back. His impressive laser passes helped Real Madrid’s overload from the Left-Wing. 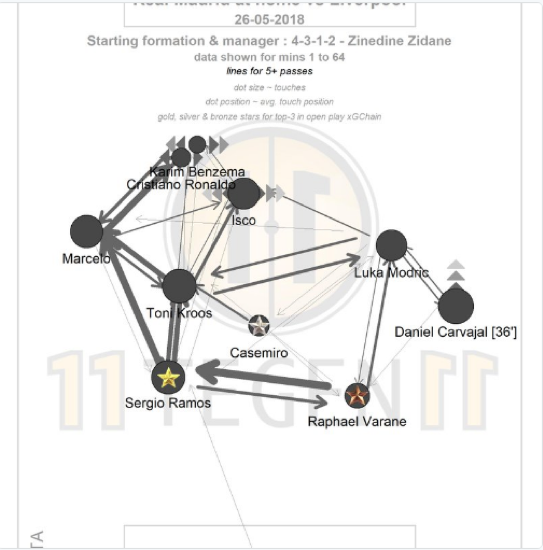 Evident from the above pass-map diagram (courtesy of @11tegen11 on twitter), the likes of Sergio Ramos, Toni Kroos, and Marcelo had a huge role to play in Madrid’s extensive pressure from the left hand side.

Liverpool, in turn, opted for a more traditional approach after losing their Egyptian superstar, and seemed fairly content in catching their opposition on the break whilst maintaining their overall shape. Following the substitution of Mohamed Salah, Sadio Mane’s pace became vital as the Senegalese international was involved in most of Liverpool’s attacking from there on in, and he didn’t disappoint either. 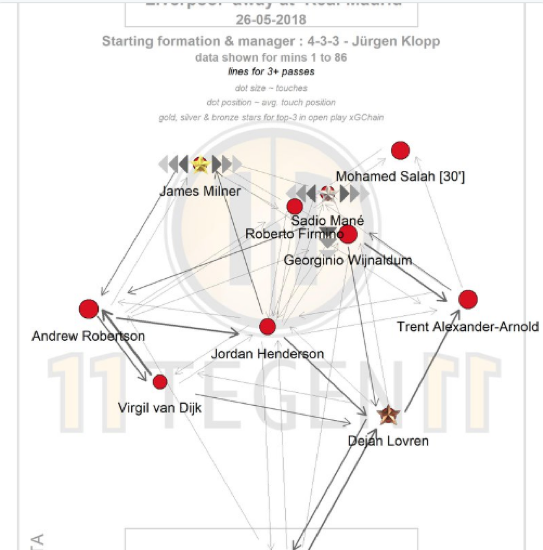 Liverpool’s passmap suggests that the Reds were much more authentic as compared to their usual game. The positioning of James Milner and Sadio Mane, in particular, made them more flexible in the offensive positions but equally complacent in midfield. Milner tried to support the attack with his charging runs while Mane drifted into a more central position in an attempt to create more opportunities with some quick interplays with Roberto Firmino, Adam Lallana, and co. This swift change in setup even earned them an equalizer as Liverpool’s constant pressure proved too much for Real Madrid just minutes after Karius’ howler in the 50th minute.

However, it was only a matter of time before Liverpool started to show their complacency in midfield. James Milner, in particular, more or less transformed into a liability as Real Madrid afforded very little time on the ball in the second half. And to enthuse more firepower into the Real Madrid attack, Zinedine Zidane introduced Gareth Bale in place of Isco just around the hour mark.

Say what you will about Zinedine Zidane and his lack of tactical astuteness but he is blessed with an acute sense of making subtle in-game changes, which often makes a huge difference, and last night was no different.

Gareth Bale’s sumptuous strike handed Real Madrid the lead, just after coming in as the crowd erupted into chaos. Indeed! The Welshman will definitely be remembered for scoring one of the best goals in a Champions League final for decades now.

Gareth Bale just did that pic.twitter.com/nN0vr5uXjx

That being said, the Reds also deserve some praise for not giving up, as Jurgen Klopp constantly tried to find a method to disrupt Real Madrid’s defensive solidity. But the sheer individual qualities that Real Madrid have in long supply, meant that the Merseyside giants had very little margin of error, knowing that a sudden loss of possession could have potentially killed the game, especially with the likes of Ronaldo, Bale, and Benzema lurking.

At the end of the day, however, it was Liverpool’s own doing which inflicted more damage into their hearts when Karius pulled off his second howler of the night. A long-range effort from Gareth Bale, which should have been saved, was horribly fluffed by the former Mainz keeper, allowing the Welshman to score his second of the night, and also seal Real Madrid’s third consecutive Champions League triumph.