Senior writer and in house FPL analyst Anirudh Shenoy examines the unfavourable gameweeks approaching FPL managers from GW 30. He takes us through what lies ahead and the possible approaches managers can utilise to use their chips.

For most FPL managers, getting the chips right in the game is among the hardest decisions they have to make in the season. This season however it is tougher than most with the double GWs and the blank GWs being packed so close together it appears almost impossible to navigate them even with all 4 chips intact.

Please remember you cannot use two chips in the same week, so if you choose to wild card in GW30 you cannot play your bench boost or your free hit in GW30.

So in this piece, we’re going to try and break down what potential strategies we could use with our chips to get the maximum out of our GWs and then in the upcoming weeks, we’ll tell you what players to get in based on that.

So most of the strategy’s involve 3 of the chips, with the triple captain chip being more of a gamble given that we have only Brighton and Cardiff potentially having a third double GW, with neither presenting us with any major TC options.

In GW33 the teams that progress to the semis will not have a fixture either.

The fixtures that were supposed to be played in GW33 will probably be moved to GW35.

This is still speculation at this point in time, but it is highly likely that the teams that blank in those weeks will have double GWs in GW32 and GW35.

Here is our optimal strategy for the FPL managers who have all their chips in hand: 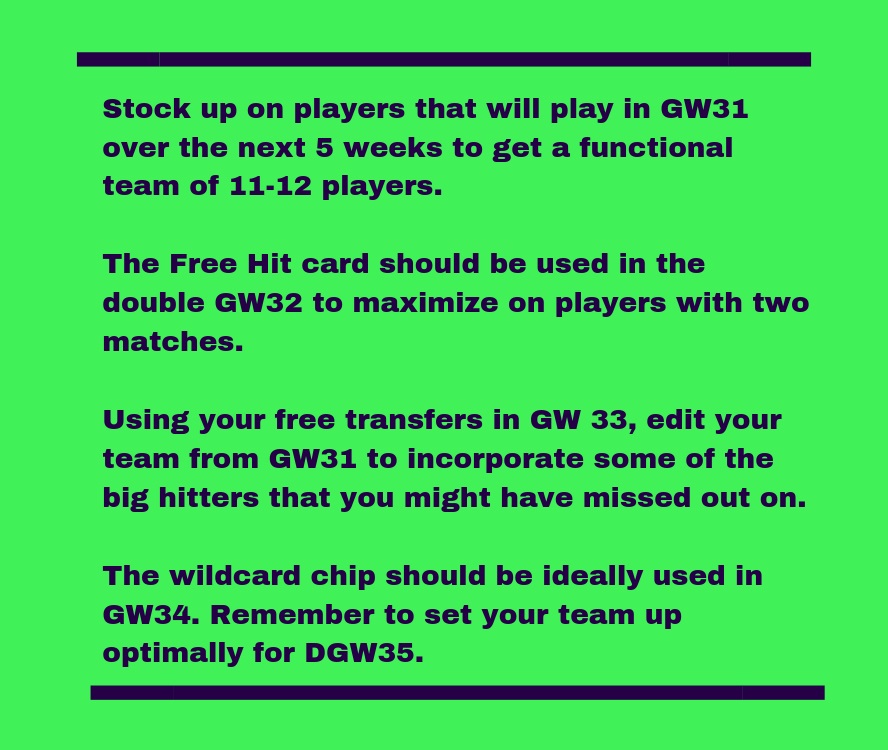 We’d recommend you use the Bench boost chip in double GW 35 to reap the rewards of all players playing twice.

You can choose to fit the TC chip anywhere across the next 12 weeks, with Salah having Hudds(H) or a City asset at home to Cardiff or Pogba having Cardiff(H) although ideally GW25 TCing Aguero or Sterling with the benefit of hindsight looked a formidable punt.

This strategy seems foolproof and quite stable, definitely the one to adopt if you’re looking to hold a lead at the top of your mini-league as it is the safest option.

The punt or gamble, intuition based strategy: 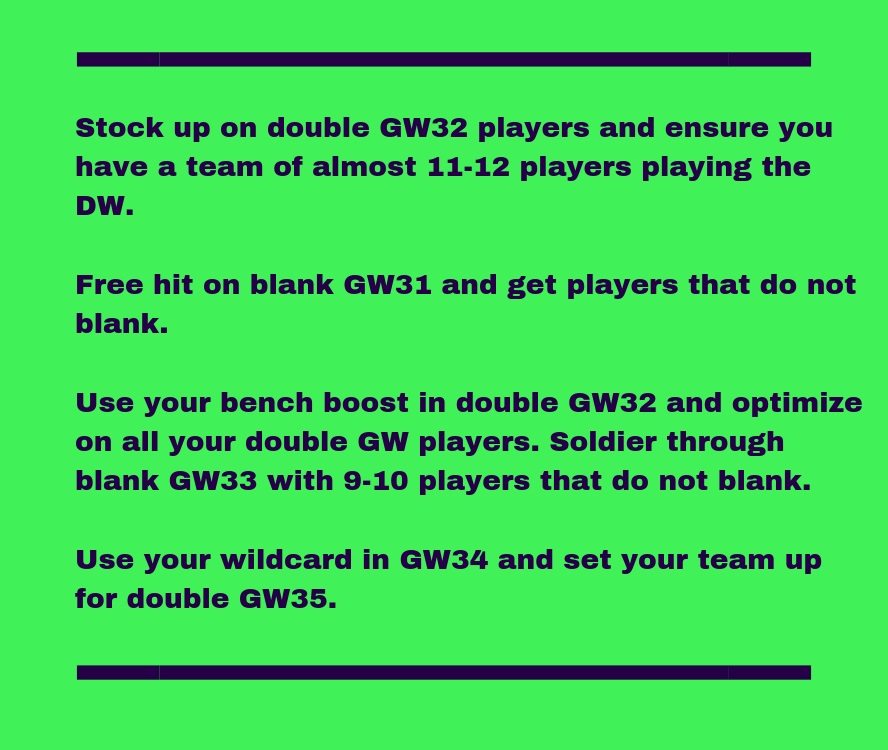 Use your Triple Captain in Double GW35 on a United/City/Spurs asset as they are the only 3 of the Top 6 that will have a potential double but with City playing Spurs being one of the fixtures and United having Wolves and Everton away, it does not appear to be the most lucrative double.

The idea of flipping the bench boost and triple captain chips also don’t really add up with Liverpool v Spurs and United v City being two potential matchups in double GW32, so there is no standout triple captain in either week unless you’re willing to be brave.

In double GW32 captaining Aubameyang who has Newcastle and Wolves could be an option, but visiting Molineux has been tough and Newcastle have proven resolute, conceding only 5 in their last 5 despite facing 4 of the top 7.

This strategy involves a lot more foresight given that you need to be accounting for players that you think will not blank in 33 but will also have a double GW in 32. The teams most likely to be on the list given that Brighton and City are favourites in their FA Cup ties and one of United or Wolves have to go through are:
Arsenal, Southampton and one of Newcastle or Fulham.

This is not the most enticing list of clubs, hence this strategy does rely on City getting knocked out by Swansea or Brighton being eliminated by Millwall.

It certainly could be the most explosive but the over-reliance on upsets in the cup is rather high and not one that is desirable at this point.

Outside the box strategy:

Stock up on double GW32 players and ensure you have a team of almost 13-14 players playing the double GW.

Use your Free Hit in blank GW31 and get players that do not blank.

Use your bench boost in double GW32 and optimize on all your double GW players.

Follow this up with your wildcard in blank GW33 and fill your team with players that will play in GW33 and 4 that will not.

This strategy ensures you don’t neglect one week in particular and helps use your chips quite productively. Although, the reliance on Bournemouth, who are a tad unpredictable and Liverpool players who will potentially have CL action and maybe rotation is a tad worrying and it is difficult to account for injuries across that period.

It is one for the brave, but if it comes off it could work a treat.

What if I don’t have all 3 chips and have already played my wildcard and/or free hit?

If this is the case then you have to prioritize and decide which you consider more valuable, a blank GW or a double GW. The easiest mid ground solution would be to have about 6-7 players playing either of the blanks and around 8-9 that have a double GW. You will probably need to take more hits but it is something you will have to gamble on, and the age-old equation of FPL comes in. If you have player X and wish to transfer him out for player Y, for a hit would Y outscore him by 4 over the period of time you plan on keeping him for? If so, go for it. The better part about a double GW is Y just has to outscore X by 2, given that he plays twice and if he is a captaincy option then it is a no brainer to bring him.

The strategy is quite confusing with most managers scratching their heads over the optimal solution, but the safe bet, for now, is just to wait and watch and not to get swayed by too many opinions.