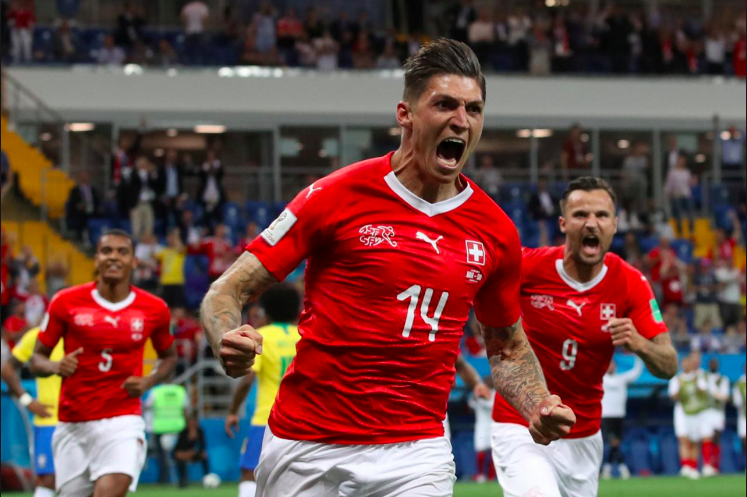 World Cup favourites, Brazil kicked off their World Cup campaign against Switzerland, in a game that ended 1-1 with goals coming from Coutinho and Zuber in each half.

Brazil lined up as expected with Jesus leading the line ahead of Firmino and Coutinho slotting into midfield in a 4-3-3 system with Casemiro holding in midfield along with Paulinho, giving Coutinho a slightly more free role. Neymar and Willian occupied the flanks, with Marcelo and Danillo overlapping respectively.

Switzerland lined up in a 4-2-3-1 with Sommer in goal, two well-established Full-Backs in Lichtsteiner, recently transferred to Arsenal and Rodriguez with Xhaka holding in midfield. The creative responsibilities were handed to Dzemali, Zuber and Shaqiri playing in behind the main striker Seferovic.

The game started as one would expect with Brazil bossing the ball, and Switzerland looking to attack on the break. Neymar started the game off positively playing a little more centrally than on the left flank. Most of the attacking threat in the early exchanges came from Brazil, and more specifically their right-hand side with Willian attempting to deliver venomous balls across the face of goal.

Paulinho had the first real chance from a couple of yards out that he skewed wide. On second look, it was actually a great stop from Yann Sommer. Jesus with his pressing was causing the Swiss defense problems initially but they maintained their composure through it. Despite Brazil’s attacking exchanges in the first 20 minutes, Yann Sommer remained relatively untroubled. What was noticeable was Shaqiri dropping into midfield to try and affect the game but to little avail.

Coutinho finally broke the deadlock in the 20th minute with a trademark thunder bullet from the edge of the area once a Marcelo cross had been headed out by a Swiss defender to him, leaving Sommer helpless, giving the watching Liverpool fans a trip down memory lane. Brazil kept the foot on the gas, preventing the Swiss from getting anywhere near Allison’s goal by passing the ball around with a bit of calm. Jesus was running the channels expertly, and stretching the opposition defense.

Brazil over the next 10-15 minutes put a shift in, with both wingers tracking back and winning the ball back and aiding their Full-Backs. Switzerland continued with their intended plan of closing down Neymar and not giving him any space to operate, resorting to fouling if need be. Behrami appeared to have Neymar’s number as the half proceeded, winning most of the duels shared by the two. Towards the end of the half, Switzerland picked up steam but they did not manage to break the door down, with Brazil going into the break possessing a relatively secure lead, with Thiago Silva heading just over the bar in the final minute of stoppage time in the first half.

The second half saw the Swiss arrive with all the attacking impetus with Zuber taking advantage of some horrendous marking by Brazil to head home from a Shaqiri corner levelling the game at 1-1 much to the surprise of the watching crowd. Switzerland continued to apply pressure on an increasingly nervous defense with Brazil struggling to make any headway and get their creative players on the ball. Brazil brought on Fernandinho for the already booked Casemiro to offer some stability in midfield.

Zuber was an unlikely target in the box but popped up with an important goal, much like he has over his last 6 starts, and continued to pull the strings.

The game started to get a little more heated as the Swiss racked up a couple of yellow cards, and Brazil threw on Augusto to try and help generate a winner. The game got stretched as the minutes went on in the second half with Jesus going down in the area but getting no joy from the referee.

As we entered the final 10 minutes, both teams defences were tiring and the game was beginning to see more counter-attacking football. Firmino was brought on for Jesus as Brazil’s final change to help stretch the Swiss defense while Embolo warmed up a while longer before being introduced for Seferovic. The game was beginning to see more players coming together, putting their bodies on the line. Firmino blazed over the bar from a very acute angle as a result of a rare lapse in concentration by the solid Akanji. Neymar then had a chance to head in from a Willian cross but could only produce a tame header and Miranda was denied a few minutes later by a diving Sommer. The final chance of the game dropped to Augusto who was denied by the trailing leg of a Swiss defender.

The game ended 1-1 with Brazil frustrated by a solid Swiss side, leaving France the only one of the pre-tournament favourites to get off to a winning start thus far.

For more news from the World Cup, click here.