A heavily deflected goal sent Sweden into the quarterfinals for the first time since 1994 as they kept Switzerland out of business in St. Petersburg.

Living up to tradition so far as every match has had an exciting period of stoppage time, this match was no different. The dying seconds of injury time saw a red card too – Switzerland’s Michael Lang left his defensive ethics behind for a moment while he brought down the last man in front of goal Martin Olsson without the ball. This sparked up an interesting debate because it was initially marked as a penalty, but after a VAR review, it was determined that it was a free kick, whiskers outside the box instead. The red card stood, however.

In a game dominated by much fancied Switzerland, Sweden’s stellar defence showed us once again, that it’s the goals that matter in this tournament, not the performance. This might also show some relevance to how far they’ve got in the tournament, going further than they could manage in the years that they had two of their arguably greatest footballers – Henrik Larsson and Zlatan Ibrahimović.

The first half was engaging, quick, and increasingly becoming a match of Switzerland’s zippy attacks versus Sweden’s unbreakable defence. It was the second half that will be remembered as the representative of the match. Forsberg’s relentless performance was rewarded with a goal, as he took a shot that was straight to the keeper Yann Sommer but took a heavy touch of Manuel Akanji who was trying to block the ball, and deviated away into the left corner of the goal. A deserved goal for Forsberg, but not entirely a deserved one to concede for the Swiss. 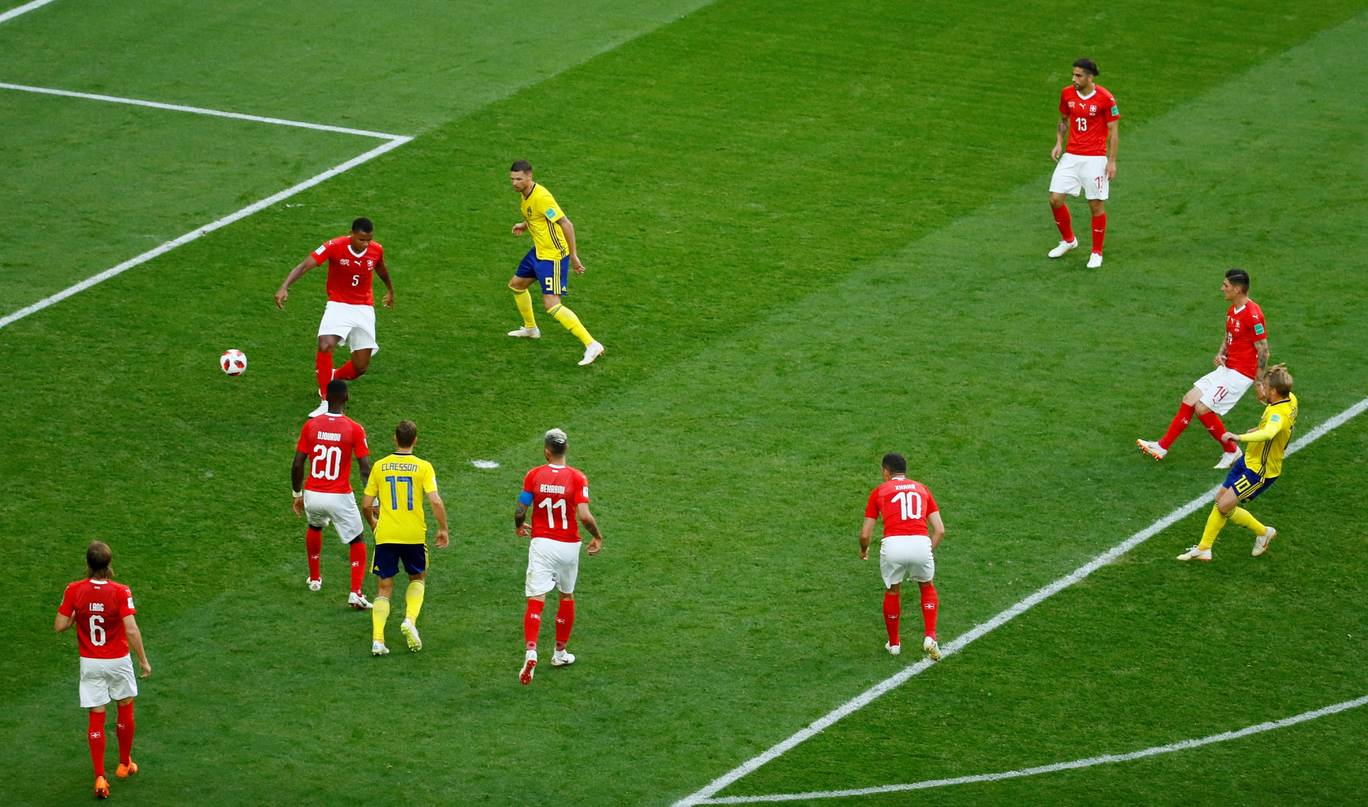 Sommer, who had been amongst Switzerland’s stars this World Cup and absolutely prophetic at times behind goal, had little to do apart from two fantastic saves in either half – though this game was more about chances missed than shots stopped.

Once the goal was scored, it was like a Swiss avalanche on the Swedish defence – and here two players deserve extra credit – Shaqiri and Rodriguez. They were probably the two best players on the pitch today, along with Forsberg. Sweden played their part well, if not almost rehearsed. Their statistics are not dissimilar to their other matches this world cup, winning with only 33% possession in their pocket.

VAR again picked up a highlight for itself when a penalty decision was reversed in the last seconds into a free kick. After an all out attack from the Swiss, Sweden countered with Martin Olssen running free and head on into the goal, before being taken down by Michael Lang. Lang had no option but to receive a red card, as he brought down the last man in front of goal and didn’t go for the ball. This was contrary to the yellow card received by Mathias Jorgensen for his foul on Rebic on a very similar occasion during the Croatia v Denmark match. Undoubtedly, a debate will ensue.

It’s time to say goodbye to a very very fiery Swiss side, who were playing without their captain and new Arsenal recruit Stefan Lichsteiner today. They have thrilled in this tournament and I am honoured to have witnessed them trying to punch above their category in their pursuit of what could have been their first World Cup quarter-final.