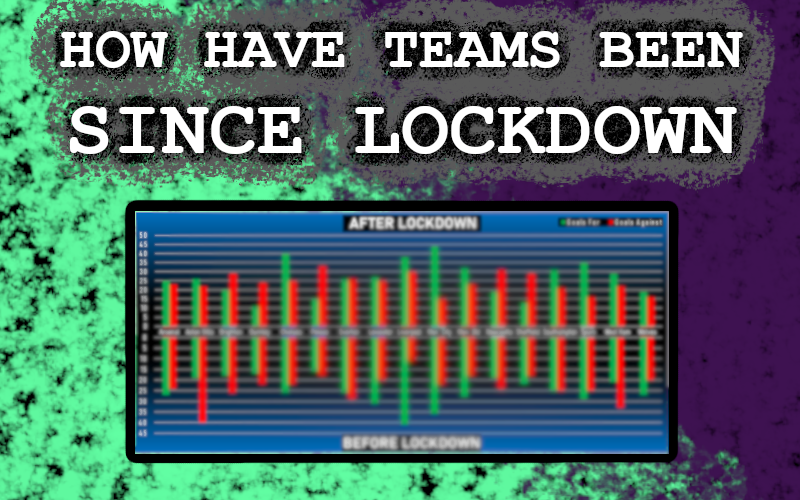 The end is in sight. In the very near future, fans will be able to return to some major European Football stadiums in larger numbers. While Ligue 1 and the Bundesliga have been experimenting with it for a while, Premier League teams have been without the 12th man for over 6 months.

In many wild predictions from Journalists across the media, there were some bold predictions about what the effect of empty stadiums would be on top Premier League teams. The BBC were one of the first major publications to predict “an end to home advantage”.

With this cruel, enforced experiment nearly over, it provides an interesting point to see what has happened to Premier League teams. In a thorough statistical study, is a detailed look on the Premier League, how the stats before June (Pre-COVID) and after compare. Leicester, Aston Villa, Liverpool, Sheffield United, Arsenal and Manchester United have all seen dramatic changes in several statistics.

Before getting into it, it is important to explain the method. This research studied every Premier League team playing in both 19/20 and 20/21 – This means no Bournemouth, Leeds etc. The research counted Premier League goals scored/conceded, home wins, away wins, red cards and goals in the last 15 minutes.

These factors were counted on a specific amount of games for each team. For example, Manchester United have played 17 Premier league games since June 2020; research counted stats from the 17 league games dating back before June for comparison.

Using stats for Liverpool has its issues. The Champions won the league early on post-restart, and have been hit with multiple injuries in the new season. Perhaps these are the simple reasons for their shocking drop off in away form. Before June, Liverpool won 7 Premier League away games, out of a possible 8, the exception coming in the last one against Watford, their shock 3-0 defeat.

Since June though, Liverpool’s away form has seen a dramatic drop. They have managed just 3 wins. Combining this with an even more worrying statistic should make Reds fans hide behind the sofa. Liverpool have conceded 30 goals in 18 matches. This is 19 more than they conceded in the same amount of Premier League games before Lockdown.

Jurgen Klopp can rest easy though, knowing he can blame previously mentioned factors for these stats. Meanwhile, Ole Gunnar Solksjaer can make an argument that he is not getting enough credit.

In their post restart form, Manchester United have won more than double the amount of Premier League away games ( 7>4 ), won more home matches ( 4 >3 ), and scored more goals ( 32 >28 ). There of course have been blips, with that devastating 1-6 home defeat to Tottenham springing to mind. Yet Solksjaer and United’s form has shown that they came out of the Lockdown period well.

Another under-fire manager Mikel Arteta can make a similar claim. Arsenal have also seen a dramatic improvement in away form. In the 19 matches going back from March, Arteta’s Arsenal won just a single away game. This came against West Ham on the 9th of December. Yet since mid-June, Arteta has transformed this aspect of his side’s form. They have won 4 times in the league away from home. One victory came in late 19/20 against Southampton. The rest have all come in this new Premier League season.

One of the major success stories in the fresh 2020/21 Premier League season has been the superb form of Aston Villa. Last season, Dean Smith’s team  just about escaped relegation. In 20/21, they have only been beaten by Brighton, Leeds and Southampton. This study may have discovered the secret behind that.

Before the restart, Aston Villa were a solid team in nearly all aspects. In their 18 game pre-COVID form, they had scored 19 goals. They had managed a win away from home, as well as three more victories coming at Villa park. They had even scored a healthy amount of goals in the last 15 minutes (5), which showed a good level of fitness.

The issue though, was that Aston Villa had conceded 40 goals in just 18 matches. This was hindering them badly and prevented them from picking up points in winnable games. They almost beat Tottenham, scoring two goals in 50 minutes in February, but conceded three to lose 2-3. However, Dean Smith clearly used the Lockdown period to rectify this.

In the 18 matches since project restart, Aston Villa have conceded just 22 Premier League goals, which is 18 less than they managed in pre-COVID form. That is an astonishing, dramatic improvement. Other areas received this magical treatment too. They have scored seven goals in the last 15 minutes of games. They have won three times away from home.

In a similar vein, Sheffield United’s form has dramatically changed since the lockdown. Rather than a positive turnaround though, Sheffield’s goals-scored has dropped off a cliff. Their Premier League goals conceded has nearly doubled. Before June, Sheffield had conceded 18 goals in 19 matches. That has now jumped to 29. They are also yet to win an away game since June. While Chris Wilder’s side have faced Liverpool, Chelsea, and Arsenal just this season, their slump to the bottom of the table may find its roots in this data.

There were some other eye-catching conclusions made from this study. For example, when it comes down to goals scored in the last 15 minutes, Leicester are unrivalled. Only Manchester City (18 goals) come close to Leicester’s enormous tally of 21 goals in the last 15 minutes of 36 Premier League matches. This stat alone will please those who bet.

West Ham are another team that the stats show a large improvement in form post-COVID. They went from 21 goals scored & 33 conceded, to an impressive 29 scored & 22 conceded. Maybe David Moyes used the lockdown to work on tactics. Players like Tomas Soucek clearly trained hard too. The Czech has 4 goals since June, after failing to score in the time between his move in January and mid-March.

In terms of overall conclusions and statistical pictures, there is surprisingly, not many changes in areas many might expect there to be. The BBC’s prediction “The end of Home Advantage” loses merit. In 306 matches before COVID, the home team won 71 times. After COVID, that stat is unchanged.

Where there is a difference, is in away victories. There have been 10 more Premier League away wins since June than there were in pre-COVID times. What this suggests is that teams have been able to turn a single point away-from-home into three. Aside from that, there have been other small changes. The number of goals scored and conceded fell post COVID. The number of Red Cards grew too, from 12 to 18.