A few days back Manchester United came away with a point against a Wolves unit tough to break down at the Molineux. They had got a chance to put the game to bed in the 2nd half; however, they weren’t able to make the most of it as Pogba had his penalty saved. Regardless, a point against Wolves at their backyard, isn’t too bad a result, especially considering that United had lost two out of the three matches they played against Wolves last season.

When we look at how United set up, it was 4-2-3-1 on paper, but it seemed more like a 3-2-4-1 when they had the ball in attack – with Aaron Wan-Bissaka coming in narrow at times and James staying wide on the touchline.

Many United fans were a little critical of the manager for not making changes quickly enough and not bringing in the likes of Greenwood earlier than he eventually did; but was Greenwood going to offer United what James was, that day?

On Monday night, James wasn’t playing as a winger alone whose primary job is to assist/score goals – of course, that’s a part of any forward’s role – but there were many other tactical aspects to his selection too. We all are aware of the threat his pace poses and how he can stretch defenses, proving to be a nightmare for any backline.

Wolves are a fair bit reliant on their wings-backs for any width they acquire while going forward. Additionally, with the threat of James and his pace on the touchline, the opposition left wing-back, in this case, Jonny was always going to be a little wary going forward, knowing how a turnover may result in a sure shot chance at his goal. They also had to keep in mind how quickly James could carry the ball into their own box.

Besides that, even when Jonny did get forward, he was tracked down by James, who made more than one run backward to dispossess him and start another attack by giving the ball back to the United centre-halves. The work he did off the ball was immense – tracking back at every available opportunity and then again hugging the touchline when United had the ball. He didn’t have too much end product to show for his performance and that’s not ideal, but with more game time and first-team experience, the output will eventually come.

Now, could Greenwood have offered the same for 20-25 minutes? We know he can play on the right, but he mostly cuts in from there, rather than staying out wide and hugging the touchline. He wouldn’t have had the same pace and off-the-ball work rate to worry their wing-back in the manner in which James accomplished it. Greenwood would have been a better goal threat, but it could have opened up the game for Wolves as well. It wouldn’t have been too wise to return without a point, after having a big chance to secure all 3 in the form of the penalty United got. Whenever the prodigious teenager gets his first proper chance in the league this season, it should ideally be a situation which best suits him and where he can make maximum impact by playing in his comfort zone – rather than performing a role which doesn’t fit him well

It’s all good to be excited by talented youngsters coming through, but fans shouldn’t lose sight of the fact that it’s crucial to throw them in at the exact point of time that would make them feel confident about themselves, and make them believe that they belong to a higher level, and inspire them to keep improving from there on and adding other positive aspects to their game as their careers progress.

Mason is a special talent, and after seeing how Ole handled the Wolves game, I’m pretty confident that he’ll take very good care of Mason and not throw him in the deep end just for scoring a few brownie points among the fans – many of whom who don’t always look through situations and just prefer to be reactive about things. 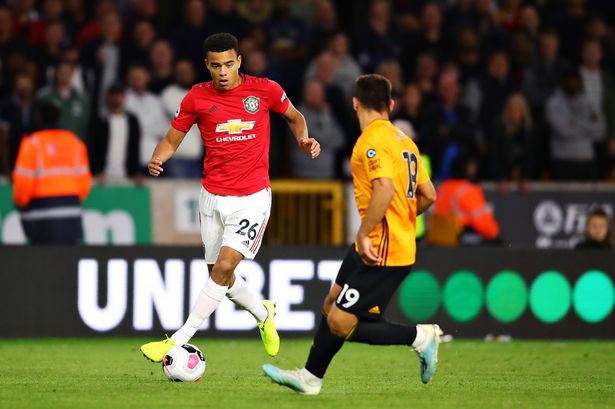 Apart from this, the other player that most fans had an issue with staying on the pitch for as long as he did was Jesse Lingard – and I would agree to some extent. He had a good first half, playing a very big part in the first goal in the form of a pre-assist. Apart from that, he also had a good game on the defensive side of things, in tracking back proficiently when Wolves were in transition. However, is that enough for a number 10 playing for Manchester United? The unanimous answer seems to be a no.

However, for games like these and those against the top 6, Jesse is probably our best bet for that position currently. His off the ball work will come very handy and he can play well when the opposition gives space in the middle. As I said, it’s far from ideal, but he’s probably one of our best players for performing that particular role right now until we get in better players.

Another player who can grow into that role is Andreas Periera. He is energetic, which helps when the opposition is making transitions. He also provides more than what Jesse does on the creativity front. Andreas Pereira is definitely an upgrade in that aspect. Hopefully, he can grow into the role as the season progresses and prove to be a decent squad player, at the least.

The Brazilian needs more time on the ball, and a tad bit more space to be able to make an impact in a game. He won’t always get that as a No. 10, except when we play low blocks that don’t press high (unlike wolves, who do). And that will probably be the case against most teams in the bottom 10 – not against the top 6, or teams like Leicester, Wolves, etc. that press high and only give very tight spaces to operate in. This leads me to believe Andreas is more of a number 8 than a 10 – or to be more specific – best suited to the ‘Pogba position’ in a pivot. His main strength lies in the manner with which he carries the ball forward along with his passing range. He will get more scope to show that when he’s playing as a number 8, rather than as a 10.

I’m confident Ole is aware of this. He has already played him in that position in a few pre-season games and then in the closed doors game against Sheffield United. Hopefully, he starts him in that position when we play the Cup games or the Europa League because he will get a real platform to express himself and gain some confidence from that. However, he can be more than a competent player for the No. 10 position against teams that sit back since he will get a little more space to himself then.

Now putting all this into perspective, we can draw the following conclusions –