FootballMR reviews the performances of all the players on our Scout Watchlist. Who started, who didn’t, who shined and who failed. Read on to find out. 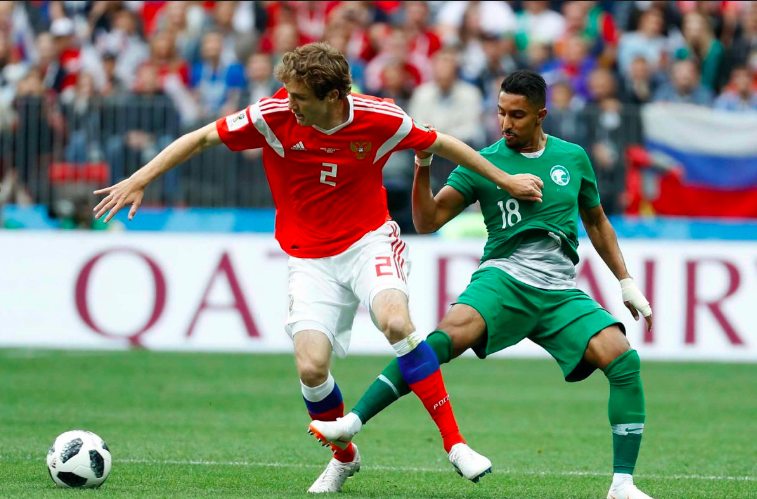 Started at Right-Back in a Russian back four. Got forward and combined with Semedov to create chances which the forwards put away as they beat Saudi Arabia 5-0. Also kept up his defensive responsibilities as Russia kept a clean sheet.

8/10 – Excellent performance, helping out in attack while keeping a clean sheet.

Al-Sahlawi hardly had a kick as the lone striker in the Saudi Arabia side. He had one good opportunity in the first half as he headed narrowly wide. Saudi Arabia failed to get the ball to him regularly and Al-Sahlawi often showed his frustration with his teammates. Subbed in the 85th minute. Al-Sahlawi is one of the players singled out for ‘punishment’ by the Saudi Arabian FA and may not make another appearance.

4/10 – Tried his best with what little opportunities he had but didn’t see much of the ball.

Started on the Left-Wing in Egypt’s 4-2-3-1 formation. Egypt as a whole struggled in attack against Uruguay’s robust defence while Trezeguet could have done better with the chances that he had.

4/10 – Was outshone by Warda as Egypt looked for an attacking threat without Salah.

Started on the right flank in Uruguay’s 4-4-2 formation. Didn’t see much of the ball as he was stationed out wide which is not his natural position. However, if Uruguay had used the width of Nandez more, he may have had opportunities to get crosses in for Cavani. Subbed early in the second half for the more attacking Carlos Sanchez.

5/10 – Uruguay failed to use Nandez and was substituted early as they changed to a more attacking style.

Came on in the 85th minute as Iran went in search of a winner. Won the free kick from which Iran scored.

6/10 – Was effective in the little time that he had on the pitch.

Didn’t come off the bench despite right back Nordin Amrabat being knocked out.

Did not make an appearance, Cedric Soares started ahead of Pereira.

Was tipped to start in the absence of Carvajal but Nacho started ahead of Odriozola, possibly due to Spain’s late chance of coach. 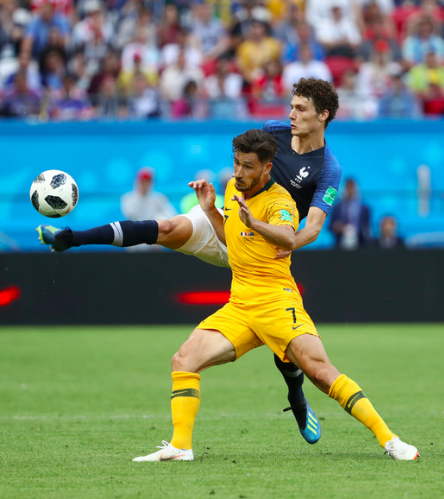 Started at Right-Back for the French, had plenty of space to attack down the right but tended to struggle in possession and passed the ball on rather than attack Australia’s Lef- Back Behich. Has been widely criticised for not getting forward enough. He may be replaced by Djibril Sidibe to provide more attacking threat from Right-Back but his defensive qualities may prove useful further on in the tournament.

5/10 – Should have provided more of a threat down the right flank but failed to take his opportunity.

Came on in the 84th minute to make his World Cup debut with Australia trying to find the equaliser. Didn’t have time to see much of the ball.

5/10 – Hardly any touches in the little time he had on the pitch.

Good performances from Larsen overlapping down the left as Pione Sisto cut into the centre. After the Danish goal,  he retreated to Left-Back and formed a solid back 4 to keep the clean sheet.

6/10 – Got forward well in the first half but this stopped as Denmark looked to hold onto their lead.

Played in a deep role in the midfield, passing the ball out to the flanks and the attacking Full-Backs of Trauco and Advincula. Took some good set pieces but couldn’t affect the result for Peru.

Started the game on the right-hand side but was isolated as many of the Argentina attacks came through the centre with the main man Messi. Got into the box at times and was fouled for the penalty which Messi failed to put away. Subbed in the 84th minute for Higuain as Argentina looked for the winner. Tipped to start in a more familiar central position next to Mascherano.

5/10 – Saw little of the ball out wide and struggled to create against a tough Icelandic defence.

Did not make an appearance from the bench. 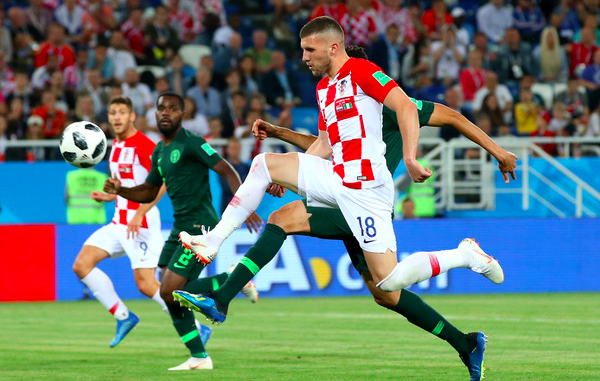 Rebic started the game on the left of Croatia’s front 4. Got into some good attacking positions and had a few chances which he failed to take including one volleyed effort which went wide. Got a touch on the corner which was later deflected in for the own goal. Subbed off in the 84th minute for Kovacic as Croatia held onto their 2-0 advantage.

6/10 – Got into good positions but didn’t make his chances count as Croatia struggled to get shots on target.

Started the game and initially defended well against Mandzukic. He could do nothing about the own goal but later gave away the penalty as he manhandled Mandzukic at a corner.

3/10 – Gave away a silly penalty which cost his team any chance they might have had at getting an equaliser.

Did not make an appearance as Serbia went with Mitrovic and later Prijovic up front.

Did not make an appearance as looked to a different type of player in midfield in Guzman.

Did not make an appearance as Brazil went with Danilo to replace the injured Dani Alves.

Started the game due to illness to Jonas Hector. Got forward down the left-hand side but along with Kimmich on the right, left his defence exposed as Mexico looked to counter at every opportunity. Could have stayed back to help his defence but his attacking play was surely down to Loew’s instructions. Subbed in the 79th minute for Mario Gomez as Germany searched in vain for an equaliser.

4/10 – Kept attacking down the left-hand side but his defence was left exposed.

Did not make an appearance as Mexico attempted to shut the game down after scoring.

Started the game as the central striker in South Korea’s 4-3-3 formation. Was unable to provide an attacking threat and hold the ball up as South Korea did not have a shot on target. Subbed off after Sweden’s goal in the 64th minute for Jung Woo-Young.

4/10 – Did little in attack as South Korea struggled to create chances. 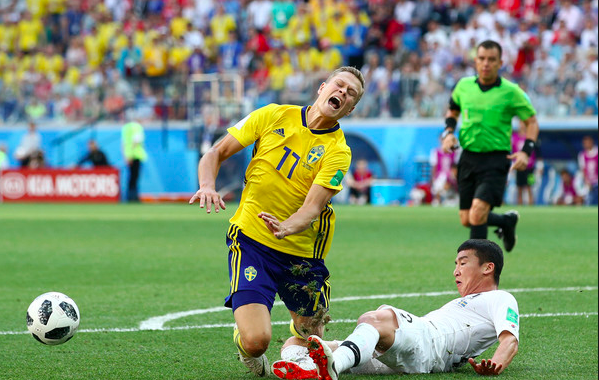 Started the game on the right-hand side of Sweden’s 4-4-2 formation. Tried to attack down the right but overall did not manage to create much for his team. Won the penalty as he was fouled by Kim Min-Woo.

6/10 – Tried his best but little came off in attack for the Swede’s but won the penalty.

Did not make an appearance for the Belgians but it has been suggested that he should start rather than Axel Witsel.

Started in Panama’s five-man defence as Panama struggled to keep out Belgium. Performed well in the first half as they held Belgium’s strikers goalless at the break but conceded shortly into the second half and then gave away two further goals. Escobar had a lfree-kickkick saved by Courtois.

5/10 – Good performance from Escobar but could not keep Belgium out.

Came on in the 80th minute for the injured Dele Alli and along with Rashford provided some attacking impetus that had been lost by England in the second half. Had some good touches and flashes of skill in the little time that he had.

6/10 – Impressed in his short time on the pitch and could start against Panama.

Started the game on the left for Tunisia with Wahbi Khazri up front. Tunisia did not do much attacking and once they scored the penalty looked to hold onto the point. In the second half, Sliti moved in field, to close down Henderson as a result he provided less of an attacking threat. Surprisingly subbed off in the 74th minute for Ben Amor.

5/10 – Performed well but had little opportunity in attack as Tunisia came for the draw.

Came on for Juan Cuadrado in the 31st minute and replaced the red-carded Carlos Sanchez in the holding midfield area. Like his team, struggled to impose himself on the game as Japan dominated possession with the extra man.

5/10 – Came on in difficult circumstances and tried his best.

Started the game in the 3 behind Osako. Had a good effort at goal in the second half but his chance was missed. Attempted to create chances and get shots away as Japan looked and found the winner.

7/10 – Good performance from Inui and this performance should see him continue in the starting line-up.

Did not make an appearance as the more experienced N’Diaye started in goal.

The Scout’s Guide to the World Cup-