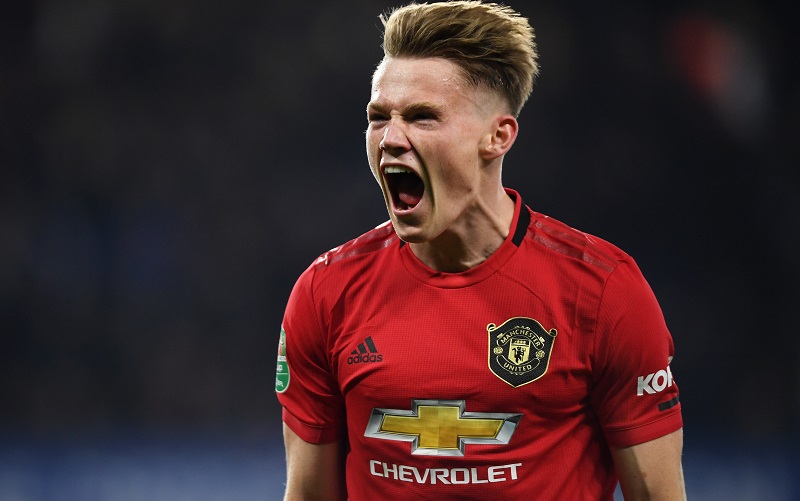 When Barcelona visited Old Trafford to compete for a place in the Champions League semi-final on the 10th of April, all the headlines before the match were dominated by the stars headlining the clash. Every paper in town was talking about the superstars, the Paul Pogbas, the David de Geas, the Gerard Piques and of course, the Lionel Messis. The match itself, though, was tame. Neither team did enough to make jaws drop at Old Trafford. However, one man did.

Towards the end of the first half, FC Barcelona midfielders Arthur Melo, Philippe Coutinho, and Sergio Busquets charged towards the player wearing no.39 to take the ball off him but the player had other ideas. He took 2-3 quick touches and after some tidy footwork left all the 3 Barcelona midfielders scrambling for the ball before he distributed it wide to Ashley Young. That was the moment when everyone started fixating their eyes on the Scotsman for the rest of the game and evidently, the rest of the season.

They came to witness one of the greatest footballers of the modern era work his magic. Instead, they saw Lionel Messi’s performance overshadowed by a lanky 22-year old Scottish midfielder. Scott McTominay had arrived.

A month and a half before the Barcelona game, McTominay was handed his first start of any significance under Ole Gunnar Solskjaer against Liverpool at the base of the midfield. The Scottish workhorse looked calm, composed and dictated play from deep in midfield and he has never looked back since. Arguably the best performing Manchester United player this season, Scott McTominay’s journey to a Manchester United mainstay is nothing short of inspiring.

Born in Lancaster, Scott McTominay joined the Manchester United academy at the age of 5 and has been at the club ever since. McTominay was a centre-forward in his earlier years and one of the standout performers for his school team. Mark Grayson was McTominay’s teacher and coach at St.Wilfrid’s primary school in Halton.“Scott was always a standout player,” says Grayson, who made McTominay captain of the team that claimed the Community Cup, an under-11 competition, in a Wembley final in 2008. McTominay scored the only goal in the final when he picked up the ball in his own half, dribbled past 2 players and put the ball in the back of the net.

“When he was in my class in year five – 10 years old – his parents asked for two days’ leave of absence. He was representing United at an event in Spain where there were teams from Brazil, Italy, Spain, and Germany. He took the Friday and Monday, and when he came back to school went to his desk straight away.

“I said: ‘Wooah Scott, tell us how it went.’ It was a small-sided tournament but they had large crowds – a couple of thousand watching each game. United got knocked out in the quarter-finals but he scored a couple of goals. There was a round of applause for this and some ‘well dones’. Yet what happened next is the measure of the lad as he’s unassuming; he just does the job. Because a little later in class he came to me and said: ‘Mr Grayson, my mum told me I had to tell you something else.’ And it was that while United were knocked out in the quarter-finals he was voted player of the tournament. That’s a real reason he was captain – kids just looked up to him.”

McTominay moved to Manchester in the second year of his senior school after being offered a scholarship by Manchester United. His parents, Frank and Julie, were concerned that his height of only 5ft 6in at age 18 may hamper his future prospects but United didn’t panic. They had done all the physiological tests and expected Scott McTominay to grow and grow well. McTominay is now 6ft 4in and it seems United’s decision to stand by him was indeed the right one.

Scott McTominay only made seven appearances for United Under-18s between 2013 and 2015. His small size and the injuries during his rapid growth in size meant that he struggled to break into the Under-18s team. He also struggled in the 2015-16 season making only 11 appearances. Despite his unimpressive record, coaches Paul McGuiness and Warren Joyce stood by the Scottish midfielder because they believed in his technical abilities and knew that he has got what it takes to make it. The 2016-17 season was the Scot’s breakthrough season for the red half of Manchester, making 21 appearances across the under-18s and under-21s. On 30th April 2017, Scott McTominay was named on the bench by Jose Mourinho for the match against Swansea City and on May 7th, 2017, he made his first appearance for the club coming on as a substitute against Arsenal and he became a regular first-team squad member ever since.

McTominay was doubted by pundits and fans alike when he burst onto the scene seeing the below-par record he boasted for the Manchester United reserve sides. The criticism and doubts only increased when the Portuguese manager chose the Scotsman over star midfielder Paul Pogba in a number of games during the 2017-18 season. “Teacher’s pet”, “Mourinho’s publicity stunt”, as he was labeled by many fans and pundits. That label is very difficult to shrug off especially when the manager invents a new award just for you.

“This kid cannot go home without an award, Scott gives to every other kid the belief that their dream can arrive. This player gives everything. For me there are not young players or old players, it’s about the quality of the personality and this kid has everything I want, so I think that it is good for the younger boys in the academy to look at him as an example.” – Jose Mourinho, explaining his introduction of the Manger’s Player of the Year prize

When Ole Gunnar Solskjær took over from Jose Mourinho last season, Scott McTominay was one of the first names expected to fall off the radar and disappear. Instead, the Scot signed a new contract and has gone from strength to strength. During his early days, McTominay was very conservative with his game mainly comprising of short passes and keeping the flow of the game going. He has gone from a conservative shy midfielder to a wild, tireless midfielder who never stops running and the stats back it up. The 22-year-old midfielder has covered more distance than any other Manchester United player in the Premier League this season and his development under Solskjær has been surprising for many. People close to the 22-year-old are hardly surprised though, they knew how good he was.

“He is amazing – he is 21 and to play like that and control the game is impressive. He will be a big player for Manchester United. When I joined I saw within a few days he would become a top player.

After the 1-1 draw against Huddersfield Town last season which mathematically confirmed that the Red Devils won’t be finishing in the top 4 that season, Scott McTominay was pictured sitting on the Huddersfield bench for a long time, looking devastated. That is what it means for him. The Scot plays each game as if it were his last and while his technical ability may not be the best that anyone has seen from a midfielder, his determination separates him from the rest. (This isn’t to say that he hasn’t shown glimpses of displaying fine technical qualities) The Scottish midfielder wants to get at the end of every pass, he wants to win every 50-50 tackle, every ariel duel he ever gets himself into. He plays like the kid on the playground that wants to do everything and this ability of his has made him one of the first names that Ole Gunnar Solskjær includes on his team sheet. 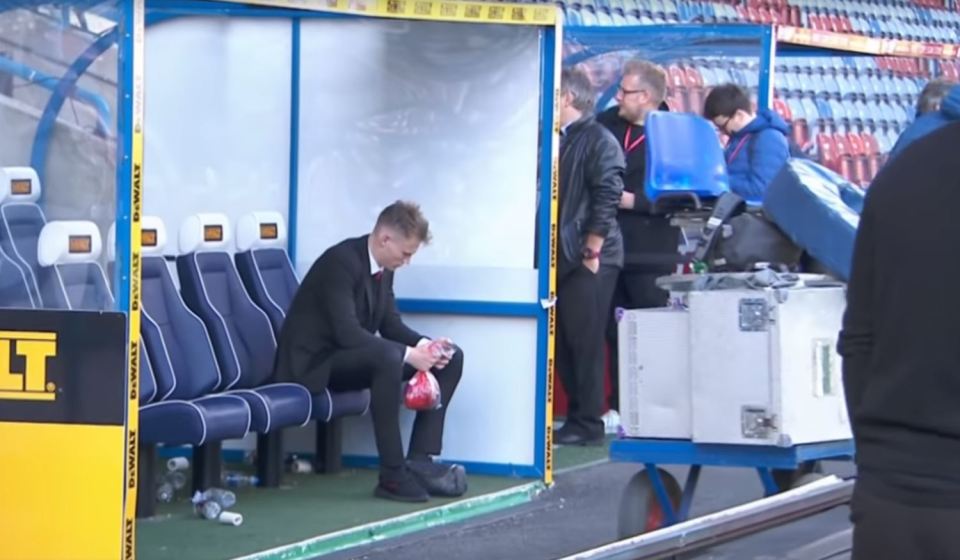 The Scottish midfielder has arguably been the best Manchester United player this season. He has been a mainstay under Solskjær, playing a total of 1067 minutes, only David de Gea and Harry Maguire have played more. He has also amassed a total of 2.3 tackles, 1.3 interceptions and 1.3 clearances per 90 this season while boasting a passing accuracy of 78%. The 22-year-old midfielder has also scored 3 goals and added another assist contributing equally to the offensive and defensive side of the game in the absence of Paul Pogba. An impressive season for him so far has seen him turn all of his doubters into believers.

During the Carabao cup match against Chelsea this season, clips emerged of Scott McTominay shouting at the top of his voice to the senior players in the squad to get into position so as to defend a slender 1 goal advantage and eventually secure the win. He was also seen rallying the troops to ‘go again’ after the third goal against Chelsea. Along with his ever-improving technical ability and his passion for the club, Scott McTominay also looks like he is a born leader and many players look up to him as well.

“If teams are trying to intimidate us, he [McTominay] is there. He is a leader.” -Ole Gunnar Solskjær

Some players in football are special even without any special attributes. These players are not the most skillful. They aren’t the fastest. Neither do they possess great pace nor do they have the best vision. But these players have something else very special in them- their determination. They are ready to work as hard as it takes, ready to give anything for the team. They could walk on fire or live in a coffin for their team but all they want to do is give their 100% every time they step onto the pitch and this very grit and determination make up for these players where they might lack technically. Scott McTominay is one such player, and the fact that he is showing improvement on his technical side of the game bodes very well for the club. He might not be the most gifted player to come out of the Manchester United academy but he certainly is among the most hardworking and improved youth prospects.

On 6th February 2018, during a heartfelt tribute to the busby babes, Sir Alex Ferguson was seen telling Jose Mourinho to play Scott McTominay more. When two of the greatest managers of the game see something special in a player, he ought to be more than just a ‘publicity stunt’.