You are here
Home > Opinion > Sarri’s last chance; The return of Serie A

With the return of Serie A set for June 20th, we are set for perhaps one of Europe’s tightest title races. Just a single point separates Simone Inzaghi’s Lazio side from Maurizio Sarri’s Juventus. With the Premier League, Bundesliga, and Ligue 1 sewn up, Europe’s prying eyes will be drawn to see if a team other than Juventus can win the title for the first time since Milan did it in 2011. Sarri cannot afford to let this happen, but he is more than struggling at the moment.

Shortly before Italy went into a national lockdown, Juventus went down 1-0 in the first leg of their Champions League first-round tie vs Lyon. In an interview with Sky Sport Italia after the game, he said: “I don’t know why I cannot get the players to understand the importance of moving the ball quickly.” It was a bizarre remark for a manager to be making at a time when he needed to get his team to be geared up for the season run-in.

Stats begin to paint an especially ugly picture when we compare this season to Sarri’s last Serie A campaign, his final season at Napoli. If we pick them up at the same point in that season as now (WorldFootball.net), Napoli had scored 10 more goals, conceding 10 less, and had 69 points compared to Juventus’ 63. The deeper numbers shown below in this graph visualise how Sarri’s Juventus aren’t functioning as efficiently as his primed Napoli side, which arguably had less talent and by far fewer resources than Italy’s most decorated club. Sarri grew up to fame for his attacking tactics and joyful football. Currently, his Juve side are producing the least number of Key Passes p90 when compared to the two seasons before. This includes the ill-fated spell at Chelsea. 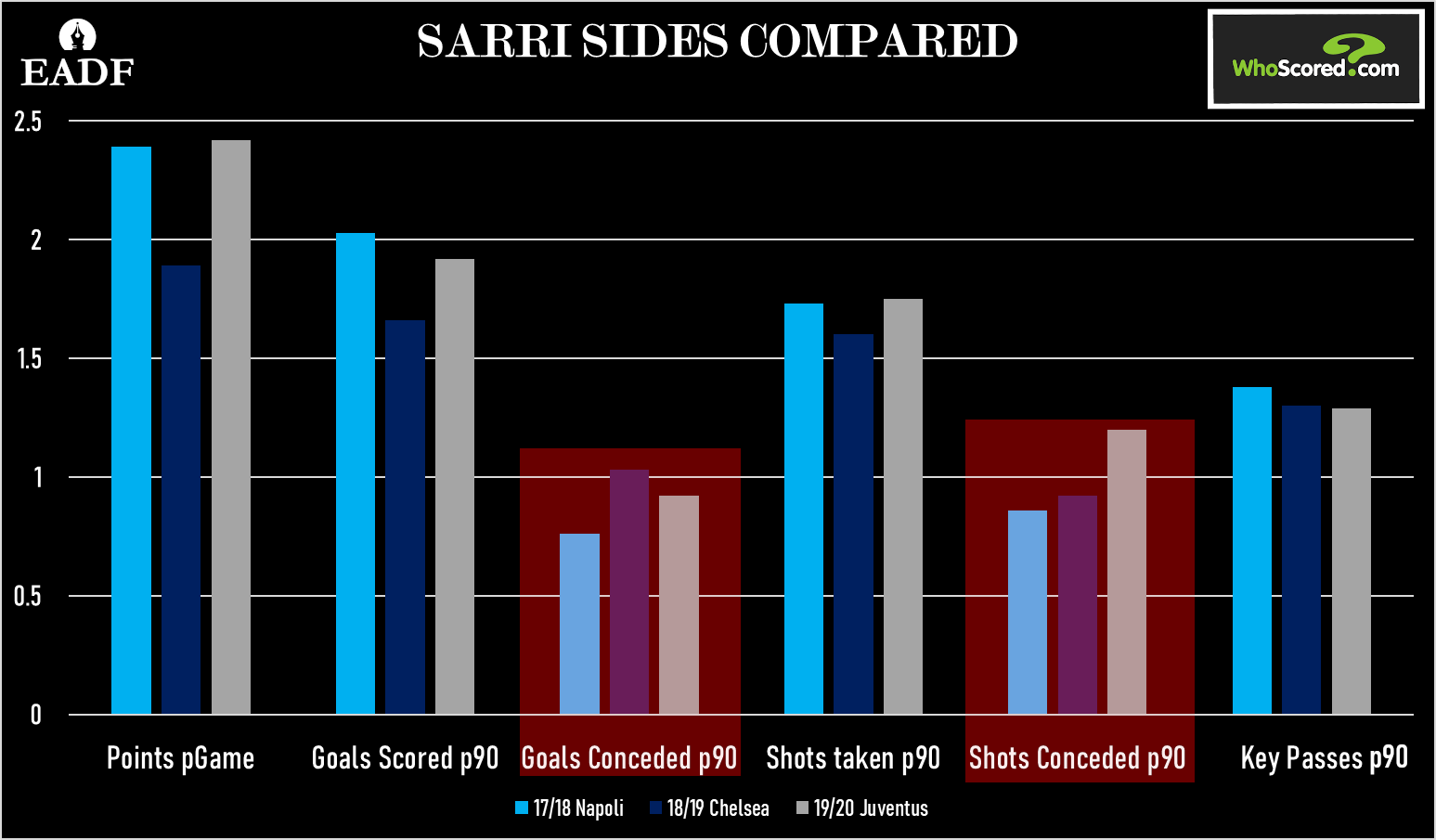 Yet, this is not just an issue with the numbers. Watching them, it is clear where the previous comments Sarri made are coming from. Juventus seriously lack tempo. They give lots of time to opposition players. You can take your pick of the games from the shock loss at Hellas Verona where Fabio Borini eased through the defence and midfield before scoring, or the 2-1 defeat to Napoli where Alex Sandro applied little pressure to stop Callejon’s cross that set up Insigne. With such evident problems, some may wonder why Sarri was hired as the man to progress the club forward in the first place.

Chelsea decided to bring the Italian in because, under Sarri, Napoli had twice pushed Juventus for the title only to miss out narrowly. But more than that, they had won the hearts of the country and European neighbours. While Juventus did win in 17/18, Napoli produced sensational one-touch passing football that reminded fans of Pep Guardiola’s sides. After Manchester City narrowly won against Napoli in October 2017 in the Champions League, Pep spoke to BT Sport afterwards and said that Sarri’s side was “Maybe the best team I’ve faced in my career”. This praise alone showed how highly regarded Sarri was and why he got the jobs at Chelsea and Juventus.

But the key components of this side were an extremely high amount of pressure on the ball, very quick passing and lots of chances created. It was a polished system. The same energy and tempo have been missing in this season’s Juventus set up. World-class performances by Cristiano Ronaldo have bailed the team out on quite a few occasions. Rather than a system elevating the team’s ability, it feels as though, most of the players are limited. Especially since this is the closest Juventus have come to losing their Scudetto crown since Sarri himself was knocking on the door of the team from Turin. And the difference in points between them and Lazio feels less of revolution at Lazio, and more of a crisis within Juventus.

With the struggle and pressure established, how can Sarri save himself from his reputation collapsing? Juventus still have to face Milan, Atalanta, Lazio, and Roma in the last 12 games of the season, but the break in the season could be a blessing in disguise for Maurizio Sarri. The comparisons to his final season at Napoli hold relevance, but it is essential to remember that Sarri had been cultivating his team for three years before their 91-point season. Sarri’s complaints of his players not adapting to his system and moving the ball in the way he wants to add to the possibility that this may be an issue of time rather than more deep-seated system failures.

The enforced break from the suspension of the league, therefore, could become a catalyst in the reversal of Sarri’s influence on the team. On May 6th, the players at Juventus returned to individual training, and on the 21st they returned to full team training. This gives them a month to put in hours on the training ground and work with the system Sarri wants. This is like a pre-season, a time for the squad to regroup. Time cannot be wasted here, and Sarri knows it.

This is a god-given last chance. If Juventus return on June 20th away at Bologna and still show a lack of tempo and a lack of pressing, then perhaps Sarri really is already done at the top. It may sound harsh, but if he cannot implement his tactics properly with practically 2 mid-season breaks, then clubs can’t look at him without knowing they are effectively writing off their first season as they can’t guarantee Sarri will provide them with a boost.

Archive | Breaking Down The Brand: A Tactical Analysis Of Sarri-Ball |