Antonio Conte won the FA Cup back in May, but barely 24 hours after tasting the champagne his head was supposedly on the chopping block. Ever since then rumours began to swirl in Italy and England that Chelsea were pursuing Maurizio Sarri, who had recently been replaced at Napoli by Carlo Ancelotti. A month passed by and Sarri was still only a rumour and Conte was preparing for Chelsea’s preseason. No transfers were made and players were none the wiser regarding the future of the club. Then it was July 1st, and most clubs began their pre-season preparations with the World Cup in its closing stages. Surrounded by chaos, Chelsea postponed their preseason start date by a week in the hopes of appointing Sarri. But it was then July 9th and Conte strode onto the Cobham grass to begin training.

Chelsea’s Sarri pursuit was probably the worst kept secret in football, yet he had not been appointed after weeks and weeks of rumours. Instead, it was Conte who put the players through their paces, knowing that his time at the club would end sooner rather than later. That time finally arrived at the end of that week, when the club fired Conte and his staff on July 13th.

The next day Maurizio Sarri was appointed as the manager and Chelsea’s dismal summer finally had some direction and hope. But with the Premier League’s transfer window slamming shut on August 9th this year, Sarri faces an uphill challenge to get the Blues ready for the new season. Furthermore, Chelsea’s 14 World Cup stars will be joining the team in stages with the last group of players coming in just before the Community Shield. Added to this are the high-intensity rumours surrounding the futures of Eden Hazard and Thibaut Courtois. 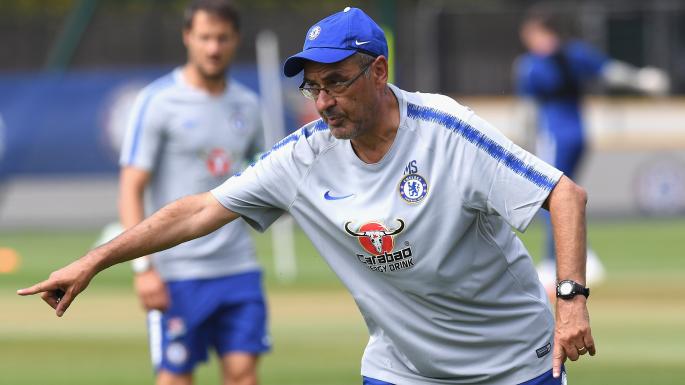 The Sarri-led team are now in Australia, working hard to be ready for the new season. So it’s time to put the disappointment of the summer behind and look forward to a future with Sarri at the helm. What exactly can Chelsea fans expect from him? Well, his record with Napoli gives plenty of insight into that. Over last three years, Napoli were the highest scoring team across Europe’s top leagues and would have been Italian champions if not for Allegri’s ruthless Juventus team.

Like most Italian managers, Sarri demanded strong defensive solidity from his team, but Napoli were also one of the most exciting teams to watch. They were able to turn defense into attack in a matter of moments, with the ability to pass the ball from their box to opposition goal in blistering pace. “Sarrismo” as it was called, was the equivalent of watching Pep Guardiola’s City playing at full pelt and this should excite the Blues’ fans.

Sarri first entered the spotlight when he began managing Emploi, a second tier team in Italy. Within two seasons he led the team to promotion and a 15th place finish in Serie A. He did so using his “Sarrismo” philosophy, which eventually caught Napoli’s attention. His playing style was extremely popular and successful in Naples too, but there is a lot more than meets the eye with Sarri. He may come across as a stern and cutthroat manager, but instead, he emphasizes the importance of fun and wants his players to enjoy playing on the pitch.

He is also known as one of the most detail oriented and meticulous organizers around, and his ex-players often say that he has played the game in his head even before a ball is kicked. A tactically astute manager, Sarri is extremely adept in preparing his teams very well for matches and situations that others fail to see.

During his time at Napoli, Sarri preferred a 4-3-3 formation, which is different from the three at the back that Conte preferred over the last two years. Expectations are that Sarri will use the same 4-3-3 at Chelsea too and this means players will have to get used a new system and will also provide opportunities to players to excel in new roles. The midfield area is extremely important in the way Sarri plays and therefore it was fantastic business from Chelsea to buy Jorginho from Napoli.

Sarri has three specific roles in midfield: a deep-lying playmaker, a box to box midfielder, and an Attacking Midfielder who links attack and defense and provides a goal threat. Jorginho and Kante most definitely fulfilhave the first two roles, but Fabregas might struggle in the last role. This is where Barkley should be able to shine, with Sarri’s system screaming out for a player like him.

With Jorginho, Kante, and Barkley looking likely starters, Chelsea have plenty of depth to support them. Fabregas, Bakayoko, Drinkwater, and Loftus Cheek will provide the team with quality depth in a long season. Looking at the defense, Chelsea are well stocked here too and Sarri also requires his Centre-Backs to be good on the ball. Alonso and Azpilicueta should take their positions at Left-Back and Right-Back respectively, with Christensen the most likely starter. That leaves one position open, with David Luiz, Cahill, and Rudiger fighting for it. However, Sarri has already suggested that he wants another quality Center-Back, with Ruganirumouredd to be the preferred target. With Sarri focusing on ball playing ability and pace, the likes of Luiz and Cahill might find their days numbered at the club. In goal Courtois should be the first choice if he decides to stay.

In attack, Chelsea have a problem or two that need to be addressed. Sarri will deploy two wingers in support of his main striker, and Hazard and Willian are perfect for Sarri’s system. But both of these players are rumored with a move away from the club, and the aging Pedro is the only main backup. But the manager could also use Musonda and Hudson Odoi in rotation for cup competitions. Sarri is known for using young players and unlocking the hidden potential of players. Just ask Mertens who went from being a second grade winger to one of the most deadly strikers in Europe under Sarri.

Another player who flourished under Sarri was Higuain, and Chelsea fans will be hoping that Morata will be able to do the same after a difficult first season in England. But the likes of Giroud, Batshuayi, and Abraham, will have to fight it out for a spot on the team too.

These are exciting times for Chelsea with Sarri promising fun and excitement at the Bridge. He will to try to win over the club and fans with attacking football, something that everyone has craved for years. However, the shadow of marquee players leaving and doubts over the ability of certain players will continue to capture headlines until the transfer window closes. But it will also be interesting to see whether Sarri chooses to use some of Chelsea’s super talented youngsters. Furthermore, with Zola returning to the club, there seems to be a sense of excitement like never before. Only time will tell whether Sarri will be successful and if he will deliver on his promise. But one thing is certain: the Premier League needs to brace itself for “Sarri-ball”.

Sarri Image via  The Times