All these players have come from a league which was often labelled as too risky to shop in. The gap between the Eredivisie and the recognised ‘Top 5 Leagues’ has shrunk. Now, with the arrival of a top European coach in Roger Schmidt, the Eredivisie is set to evolve further in its quest to earn a reputation comparable to that of some of the other top European leagues.

In 2017, Feyenoord were crowned champions of the Eredivisie. The difficult thing to accept for Ajax and PSV was that this Feyenoord side was not a particularly memorable team. Rather than a world-class Frenkie de Jong leading the team to victory, 36-year-old Dirk Kuyt demolished the rest of the league with 21 goal contributions. The only players European clubs would gamble on from that squad were Rick Karsdorp and Terrence Kongolo, who have both taken steps backwards since their departures. These failures from Ajax and PSV to defeat such a relatively weak team were compounded in Europe, as both would fail to make it past the Europa League qualifying stages that campaign.

For Ajax, it was humiliating. They had made it to the Europa League final the previous season, and the team had only lost Ricardo Kishna and Sigthorsson from the squad that achieved the feat. The club needed someone to restore the Amsterdam giants to not only domestic glory but instil consistency in European competition. Not to mention growing a young squad.

The club’s hierarchy settled on the Bayern Munich II coach, Erik Ten Hag. He had spent two years learning under Pep Guardiola before leading Dutch side Utrecht from 11th to Europa League qualification. At Utrecht, he overhauled dietary requirements of the players and reinvigorated the club’s training programme, and his coaching helped develop the likes of Sebastian Haller. We know what happened next.

After taking charge in Amsterdam midway through the 17/18 season, Erik Ten Hag gave crucial minutes to Matthijs de Ligt, Donny van de Beek, David Neres and Frenkie De Jong. All played over 1500 league minutes, despite all being under 21 years old. Ten Hag’s work clearly paid off as they stomped to the title the following season and rose to the Champions League semi-final in 2019. Dutch Football now had a giant, but something made the league unique. Unlike France, Italy or Germany where one wins all every year without any competition of note, the clubs in the Eredivisie have put up a good fight against the top dogs in the leagues. 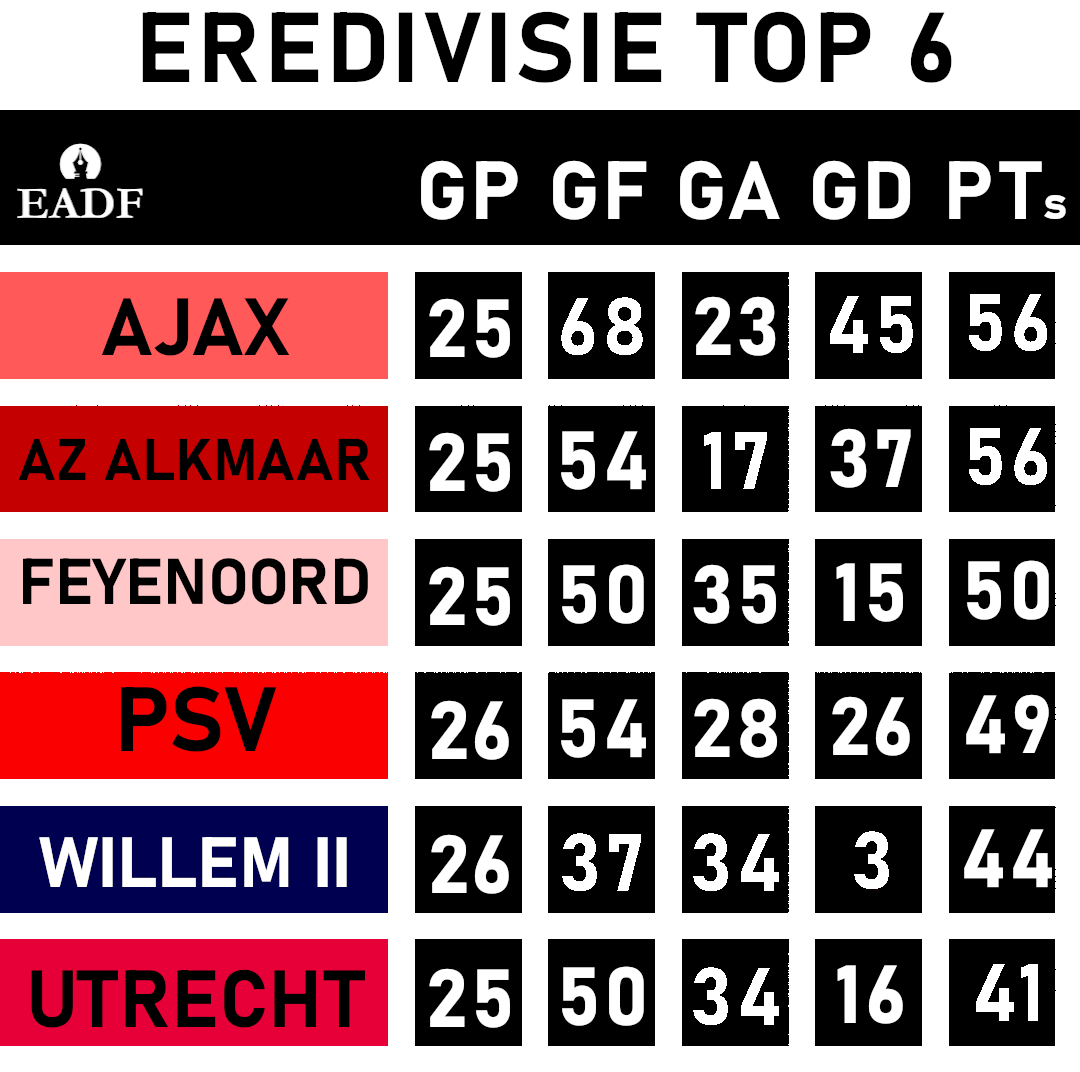 The Eredivisie was cancelled by the Dutch Footballing authorities on the 26th of April 2020, and while promotion/relegation were also abandoned, the final table may shock you. Even though Ajax retained manager Erik Ten Hag, and superstars Hakim Ziyech, Andre Onana, Van de Beek, David Neres and Dusan Tadic all played this season, they did not demolish the league. Instead, AZ Alkmaar would finish 2nd, behind just on goal difference.

Led by 18-year-old striker Myron Boadu, the team even remained competitive in the Europa League, as they finished second behind Manchester United in their group before being knocked out in the round of thirty-two. Far from a two-horse race, there was just a 12-point gap between Ajax and 5th placed Willem II. Compare that to the 27-point gap between those positions in Ligue 1, and it is clear that the rest of the Eredivisie is keeping up with the progress made by Ajax.

However, now the league is at a crossroads. While the league has cultivated talent capable of challenging top European clubs, those same clubs can swoop in and take the talent away. There is nothing to stop a club like Tottenham contacting a prestigious Dutch talent and convincing him of a dream to play competitively in Europe and domestically while being paid far more money. If anything, with more Eredivisie talents working out successfully like Dolberg, Weghorst and Bergwijn, the transfers away from the Eredivisie should increase. This would leave the clubs having to repeat their progress. This is where the importance of Roger Schmidt’s move to PSV comes in.

Schmidt is a top European coach, who previously managed Bayer Leverkusen and RB Salzburg. With Leverkusen, Schmidt created a pressing side like that of Liverpool’s gegenpress. He led the team to 4th & 3rd spot in the Bundesliga across 2014 to 2016. He also guided them out of the Champions League group stages in all three years he was at the club, cruelly losing on penalties to Atletico Madrid in 2015 in the round of sixteen. After leaving in early 2017 following a struggle in form, he spent two years in China.

Then two match-weeks before the abrupt end of the Eredivisie season, Roger Schmidt was announced as the new manager of PSV Eindhoven in March 2020, signing on a 2-year contract. He was quoted as saying: I support PSV’s demand that the club always play for prizes. My teams play football to win, always.” The effect Schmidt can have on a talented PSV squad could be momentous. While PSV finished in their worst spot for six years in 4th spot, the squad has some of the most coveted youngsters from across Europe.

21-year-old Donyell Malen was let go from Arsenal in 2018, and the club no doubt regrets this decision. Not least since TheMirror have claimed the Londoners are attempting to reunite with the striker. This is because he has scored 11 goals in just 14 starts for PSV this season. He is averaging 4.5 shots per 90 with 54% of these being on target. Then there is Denzel Dumfries, a 24-year-old right-back who won 72% of his tackles this season and has been linked with AC However, now both these naturally talented players have clear reason to continue their trade in the Eredivisie. Roger Schmidt can promise a return to domestic glory, but also to make it past the group stages for the Champions League, something PSV have failed at every year since 2015. Schmidt can bring the dream that neither Arsenal nor Milan can promise right now.

The rest of the Eredivisie will be secretly happy over this switch as well. Make no mistake, 52-year-old Roger Schmidt could have moved to any top club in Europe after his success with Bayer Leverkusen. Instead, he sends a message, that this league is a valuable place to spend the prime of your career in.

This increases the magnetic pull of the league, not only keeping the talent the league already has but perhaps persuading players from Italy or France to learn in the Netherlands. Whether that is to learn under Ten Hag or Schmidt in a more competitive league, or at Feyenoord looking to mount a challenge of their own. This tactical and reputational boost is exactly what the league needed to keep up its superb recent progress, in transitioning into one of Europe’s recognised top leagues.