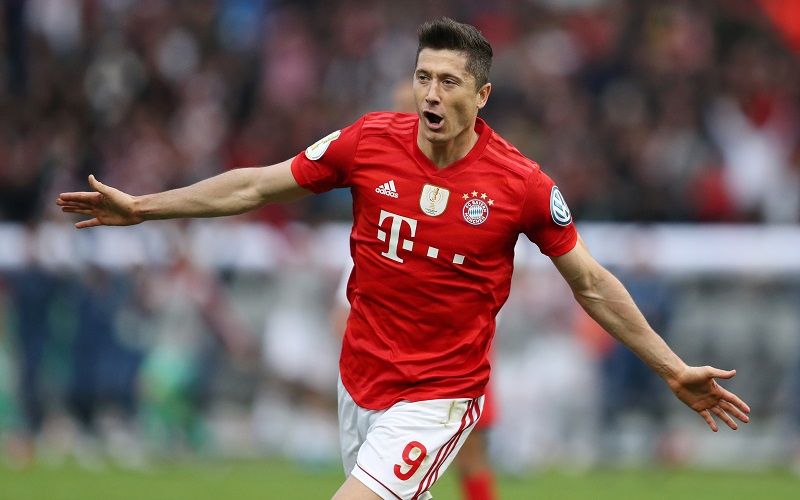 The Lionel Messi and Cristiano Ronaldo debate will go on for eternity, and rightly so, but one player who has refused to sit back and watch the duo battle it out in Europe is Robert Lewandowski. The Bayern Munich man has adopted the title of the world’s greatest striker for some time now and is showing no signs of slowing down.

The formidable forward’s incomparable ability was perhaps typified by Bayern’s stunning 3-0 victory against Chelsea in their recent Champions League round of 16 first-leg tie. Teenage full-back Alphonso Davies rightly deserves much of the limelight for his incredible display down the left flank at Stamford Bridge, with Serge Gnabry also showing just how talented he truly is, but the victory simply wouldn’t have happened without their leading marksman.

Lewandowski’s unselfish and almost telepathic nature gifted an opener for the former Arsenal and West Brom man, with just three minutes passing until the same combination was in full force once again to double their lead in west London. The Polish international then got his reward for such an accomplished display with a typical striker’s goal of his own.

Ironically, the striker rarely finds the net through simple means, with his lethal finishing from all angles showing itself for the sixth game in a row in Europe’s elite competition. His frightening statistics for the current campaign will strike fear into all those brave enough to face him, with his effort against the Blues taking him to 11 goals in the tournament this time around, a personal best.

And that tally has been reached in classic Lewandowski fashion, forcing him to the top of the group-stage table for the second successive year. The Pole not only netted braces at Olympiacos and Tottenham Hotspur but fired in four in a competition-record 16 minutes at Red Star Belgrade. He’s scored in all six games he’s played in the competition this season and has been directly involved in 13 goals. His latest take his overall tally to 64, level with Karim Benzema in fourth in the all-time rankings. As if he needed further credibility, his nine away UCL goals is a joint-record in a single campaign.

But Bayern’s success is evidently not only down to their deadly finisher. Hansi Flick’s squad are leading the way with the most wins, goals, and attempts on goal in this season’s Champions League, and have become the third team in the competition’s history to win their first seven games. Worryingly, the previous two in Barcelona and Real Madrid failed to even reach the final, but neither had their leading forward in such ferocious form. With Bayern’s insanely talented young squad, spearheaded by the experienced Poland attacker, it would take a very brave football follower to bet against them going all the way this year.

Champions League aside for a brief moment, and you don’t have to look far to see just how influential he has been for Bayern domestically. His 25 goals are unsurprisingly top of the pile, already surpassing his 22 last time out, and just four shy of his tally the year before. Those totals have been crucial to his rapid climb through the all-time top-flight German record, and while his third-place spot is some way off Gerd Muller and Klaus Fischer in first and second respectively, it would be foolish to rule him out of the race just yet.

He is and has been for several years, among fine company in Europe’s premier competition. Only Cristiano Ronaldo, Lionel Messi and Raul rank higher in the all-time goalscoring charts, with Lewandowski already above the likes of Ruud van Nistelrooy, Thierry Henry, Zlatan Ibrahimovic and Andriy Shevchenko among countless other stars of the game.

The Poland international is also quietly creeping up the table for most Champions League goals for a single club, but his attention will undoubtedly be fully diverted to this season’s tournament, and in particular the award for the most successful striker in front of goal. The insane numbers from Messi and Ronaldo have incredibly helped them share the award between them since 2008, with Neymar coming closest to knocking them off their perch by matching their ten goals in the 2014/15 campaign.

Thankfully their domination looks set to come to an abrupt end altogether this time around, but it looks like Lewandowski has a challenger of his own in Erling Haaland. The 19-year-old has ten for the campaign and is well on his way to filling the Pole’s boots in German football when he finally calls his time on a glittering career.

Fortunately, that decision is way down the line. He and his fellow generational forwards Benzema, Sergio Aguero, Edinson Cavani, and Pierre-Emerick Aubameyang still have plenty of time at the top, but it’s Lewandowski who stands tallest when it comes down to the best of the best in that position. And what better role model for the next generation coming through, with RB Leipzig’s Timo Werner already on his way to emulating his rival with 21 for the current campaign.

His 39 goals in 33 games for the German outfit in all competitions this season have been combined with time spent helping develop the younger players coming through the ranks improve in front of goal, and you would struggle to find a better coach than the man himself. It’s hard to believe he’s just 31 years of age, having been at the top of his game so consistently for so long. But Robert Lewandowski might just have gone up another level, if that were even possible, netting his first UCL knockout goal in two years in the win at Stamford Bridge.