Tonight, Watford play Norwich in the 1st of their last five games, in the midst of the tightest relegation battle we have seen in the Premier League for years. Aston Villa and West Ham face each other on the final day of the season. Anyone of them, Bournemouth or Watford, could join Norwich (who are odds on to get relegated) in the drop-down to the Championship. Here we explore their current form, what they need to change, and we predict who goes down.

West Ham are the only team to pick up a win in their first four games since the restart, with a surprise victory over Chelsea last Wednesday. While this was a significant win, the momentum of it was flattened, as West Ham twice blew the lead at St James Park on Sunday, drawing 2-2 with Newcastle. The goals were, at least, a sign of improvement for David Moyes’ side, as the team had failed to score in their first two matches against Wolves and Tottenham.

However, if West Ham want to continue scoring, they must settle on a preferred style of play. David Moyes is pushing the team towards a long ball focused side, with Michael Antonio being tasked as the hold-up man. Against Chelsea, he managed 12 touches inside the box and was physically too much to handle for Andreas Christensen & Antonio Rudiger. It was his hold up play that led to the winner. Yet against Newcastle and the far more physical defence, Antonio managed just three touches inside the box. If West Ham are to keep the 4-point gap between them and relegation, they need to improve their plan against physical sides.

The team below the Hammers is Watford. Since Nigel Pearson took over on December 6th, 2019, Watford’s form has been relatively superb. They have picked up 21 points from a possible 51, which accounts for precisely 75% of their current 28-points total. However, after their 3-0 defeat away at Chelsea last Saturday, it marked their 3rd loss since the restart. The only point they picked up was against Leicester City.

Their issue is similar to that of West Ham’s, as target-man Troy Deeney has cut a frustrated figure since the resumption of the Premier League. Using statistics from FBREF, we can see that from Pearson’s first game (January 1st) to the last game week before lockdown (March 7th), Troy Deeney touched the ball on average 41 times per game. Since the restart, that figure has dropped to 28.5, with just 22 touches against Chelsea. If Watford want to rediscover the form that has seen them rise from the foot of the table to safety, they need to provide their top scorer with better service.

Sitting in 18th position is Aston Villa. Last Sunday, it took Sadio Mane 71 minutes to fire Liverpool into the lead, as Aston Villa even managed more shots away at Anfield. Yet this positive performance won zero points, and Aston Villa have only managed two draws and three losses since the restart. While they only conceded six goals in those five matches, they could only score 2. This season, only Grealish has managed more than 5 for Villa.

Smith should not try and solve this now, though. Against Liverpool, when the focus was on defending, the league’s best attack struggled to make a dent. If Aston Villa can pick up points in low scoring draws, it may be enough. In the attack, the side should focus on set pieces. Only Bournemouth and Newcastle have scored more from corners and free-kicks this season (WhoScored). Focusing on the defence while playing for set pieces will be an old school tactic, but it may be the most suitable option for Villa right now.

Meanwhile, Bournemouth came into the lockdown on 27 points, a tally they are still stuck on four matches later as they have dropped to 19th. Everything looks to have been going wrong for the southerners. They have conceded 12 goals and scored just 3, with two of those coming against United in the 5-2 loss on Saturday. Manager Eddie Howe described this loss as ‘Really tough to take’ (BT Sport).

Howe must suddenly discover the antidote for an attack that has seen them score the 3rd least goals and a defence that has conceded the 5th most. What could help is a simple change. Using data from Understat, we can work out that Bournemouth have conceded once every 52 minutes when using their favoured 4-4-2. Though when using their 3rd most used formation, the 4-5-1, they have conceded just once per 107 minutes. Data from WhoScored shows Bournemouth’s record with the 4-4-2 stands at 3W, 3D, 10L, or 0.75 points per game. With the 4-5-1, the points per game rises to 0.8. With limited solutions for Eddie Howe, perhaps these stats can provide inspiration.

Bournemouth host Tottenham this Thursday, with games remaining against Leicester, Manchester City, Southampton, and Everton. Striker Callum Wilson is also just one yellow card off a one-match suspension. Despite being one of the most likeable Premier League sides, the fixtures combined with the worst run of form out of any of these sides, we believe Bournemouth will finish 19th.

On the opposite end, West Ham should now stay up. While the joy of the Chelsea victory was short-lived after the weekend performance, West Ham have set up a cushion for themselves. They have the easiest schedule of the four sides. Manchester United are the only team they must play who are in the top 8, as Burnley, Norwich, Villa and Watford provide more comfort. If David Moyes can have a plan B to his long-ball approach, as Antonio will struggle to hold off the physicality of Burnley and Watford, West Ham United should have just enough to stay up. 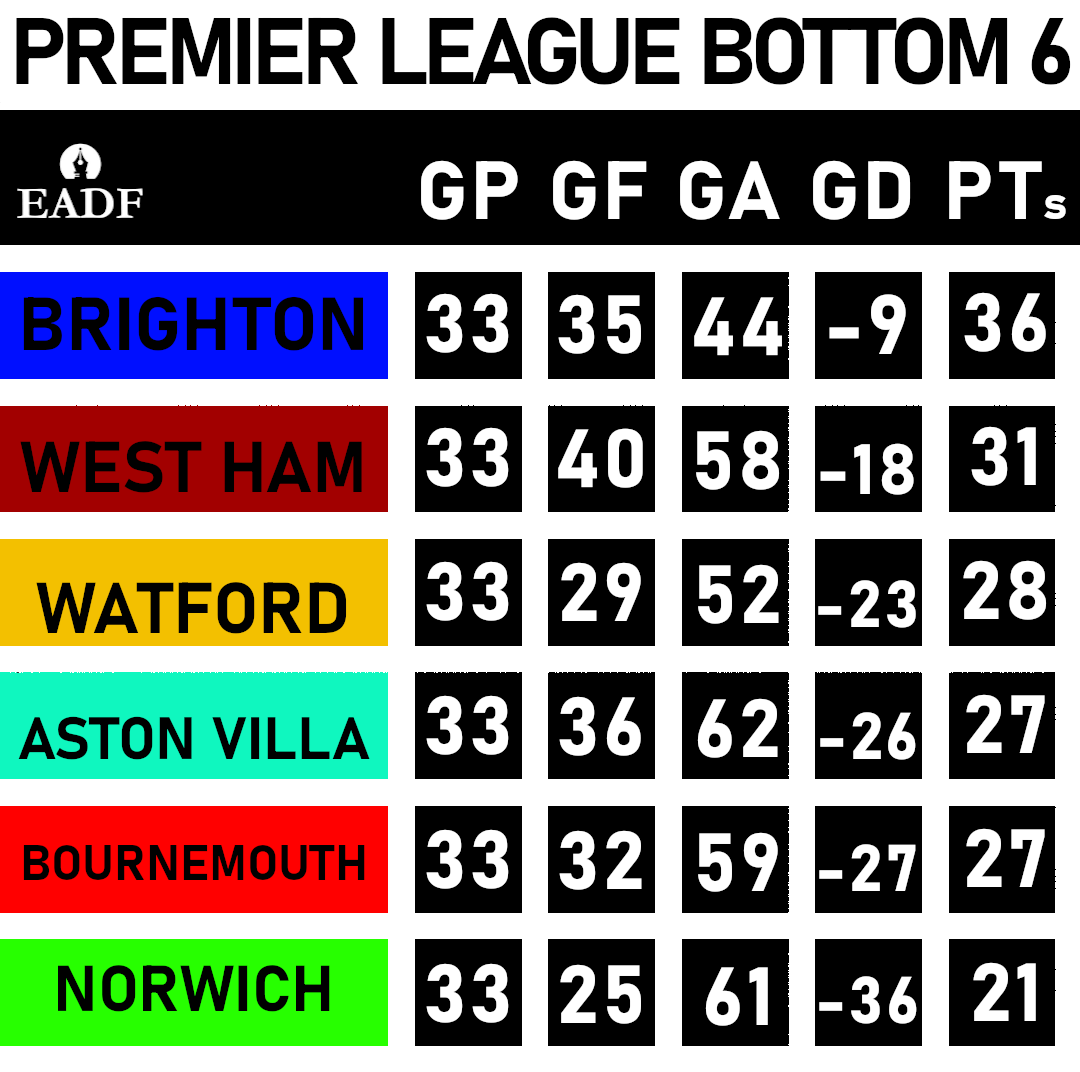 Between Watford and Aston Villa, it is incredibly tight. On current form, Watford look the most likely to stay up. They have a more experienced Premier League manager in Nigel Pearson, who famously guided Leicester clear in 2014/15. They also have superior talent to that of Villa, with Doucoure, Ismaila Sarr and Troy Deeney providing more attacking threat than Villa’s side. Villa must face Manchester United and Arsenal, and Watford face Arsenal and Manchester City.

Though Watford have the point advantage, it could easily slip away. They sit in an extremely precarious position, as Abdoulaye Doucoure is just one yellow card away from a 2-match suspension. He is not alone, as Will Hughes is also a yellow away from a suspension. Both players have been in the top 7 for minutes played at Watford, with Doucoure the most of any outfielder. In fact, under Pearson, he has scored three and assisted two. If these two players get suspended, it significantly reduces Watford’s chances of getting points from their remaining games. Should Aston Villa capitalise on that and close the one-point gap, keeping their tighter defence, then it could be the Hornet’s dropping to the Championship for next season.