After finishing 11th, Southampton can applaud themselves on a solid league season. In Ralph Hasenhüttl’s first full campaign in charge, the club have risen in the table since their early 9-0 defeat to Leicester City. “You can see the team is learning quickly,” Hasenhüttl told reporters following their 3-1 win over Sheffield United on the final day.

The fans have been treated to some great play, as Southampton have looked to thread balls through their oppositions at lightning-speed in their 4-4-2 diamond formation. However, the league is set to be stronger next season with the arrival of Leeds United to the top-flight. Wolves & Everton, too are expected to spend heavy and strengthen their teams in the summer transfer window.

The Daily Mail reported Southampton had a budget of £35 million to spend in January. Combine this with the fact they have failed to make a transfer profit since 2017/18, one should not expect the Saints to have a budget of more than £45 million at their disposal. This does not mean Hasenhüttl cannot improve drastically though, as certain positions should be targeted.

Ryan Bertrand had a comfortable season in the left-back position. Now though, the 30-year-old will need better cover as potential injuries become more probable. More worryingly, besides the relatively young and unproven duo of Kyle Walker-Peters and Yan Valery, Southampton don’t have a first-team right-back following the departure of Cedric Soares to Arsenal.

Another exit will surely come in the form of former captain Pierre Emile Højbjerg. The Danish midfielder looks set to join Jose Mourinho at Tottenham, forcing the club to search for a replacement in the window.

Finally, creativity is one of the biggest priorities during the transfer window. Southampton do not possess players who have managed more than four assists, with no one in the squad managing more than 1.6 key-passes. No player has succeeded with over 2.5 dribbles p90 besides the inconsistent Sofiane Boufal – who averages 2.7. A player in the mould of an Eden Hazard or Raheem Sterling is needed in the football club

Starting with the right-back position, Southampton cannot afford to have an import who is not used to English football. They need someone reliable and adept in defensive positions. With 66% of their play coming down the left and middle channels, less attacking reliance is imposed on the right flank. They should be competent going forward, to provide width for an often narrow set up.

There are no cheap Premier League right-backs available, so the next best shop is the Championship. Nottingham Forest’s Mathew Cash has averaged a WhoScored rating of 7.29 at right-back in 38 Championship appearances – higher than what the oft-revered Trent Alexander Arnold has managed this season (7.2) for Liverpool. This is because Cash has married solid attacking contributions (three goals and five assists) with defensive solidity.

The 22-year-old succeeds with 76% of his tackles, 52% of his aerial duels and is dispossessed just 0.7 times a match. With Forest failing to achieve promotion, one could assume the club will need to raise funds. Transfermarkt value Cash at just £4.3 million, suggesting it would take Southampton a maximum of 5 to 10 million pounds to get the Forest full-back.

On the left, Southampton can afford to take a slight risk. As established, the left-hand side is where the majority of Southampton’s play moves through. This means Southampton would require a more attacking presence.

While some fans may know RC Strasbourg’s right-wing-back Kevin Lala, a player in the team of the season in 2018-2019 season, his teammate is arguably superior.

23-year-old Anthony Caci has only made eight appearances this season, owing to a persistent injury since January 2020 that he only just recovered from. Yet taking his stats from the first half of 2019/20 proves an exciting read.

In just under 700 minutes, Caci scored once and assisted four for Strasbourg. Defensively, he was playing astonishingly well in his limited game-time this season. The Frenchman amassed five tackles and interceptions p90, where he succeeded with 75% of his tackles, meant he was a wall at the back. (WhoScored).

Going forward, though, 2.6 Shot creating actions (FBREF) showed Caci was a serious force before his injury. Valued at just £5 million means Southampton should not hesitate to pick up a player who managed the same number of league assists as Nathan Redmond.

Højbjerg was tasked with being an all-rounded midfielder, as he is in the Saint’s top 7 for dribbles, key passes, shots, passes, tackles, and interceptions. Interestingly, while James Ward-Prowse is the designated creative midfielder, Højbjerg has not been much of a defensive powerhouse. His number of 1.9 successful tackles per 90 is not remarkably high. Declan Rice averages 2.3 p 90 for West Ham and adds more interceptions to his game than the Dane.

This means that the Saints should look for a midfielder who, while is good at his all-rounded game, is particularly adept defensively. Based on their high-pressing style of play, the replacement should also be physically efficient and composed with the ball at his feet. The midfielder they should look out for is Ibrahim Sangare. 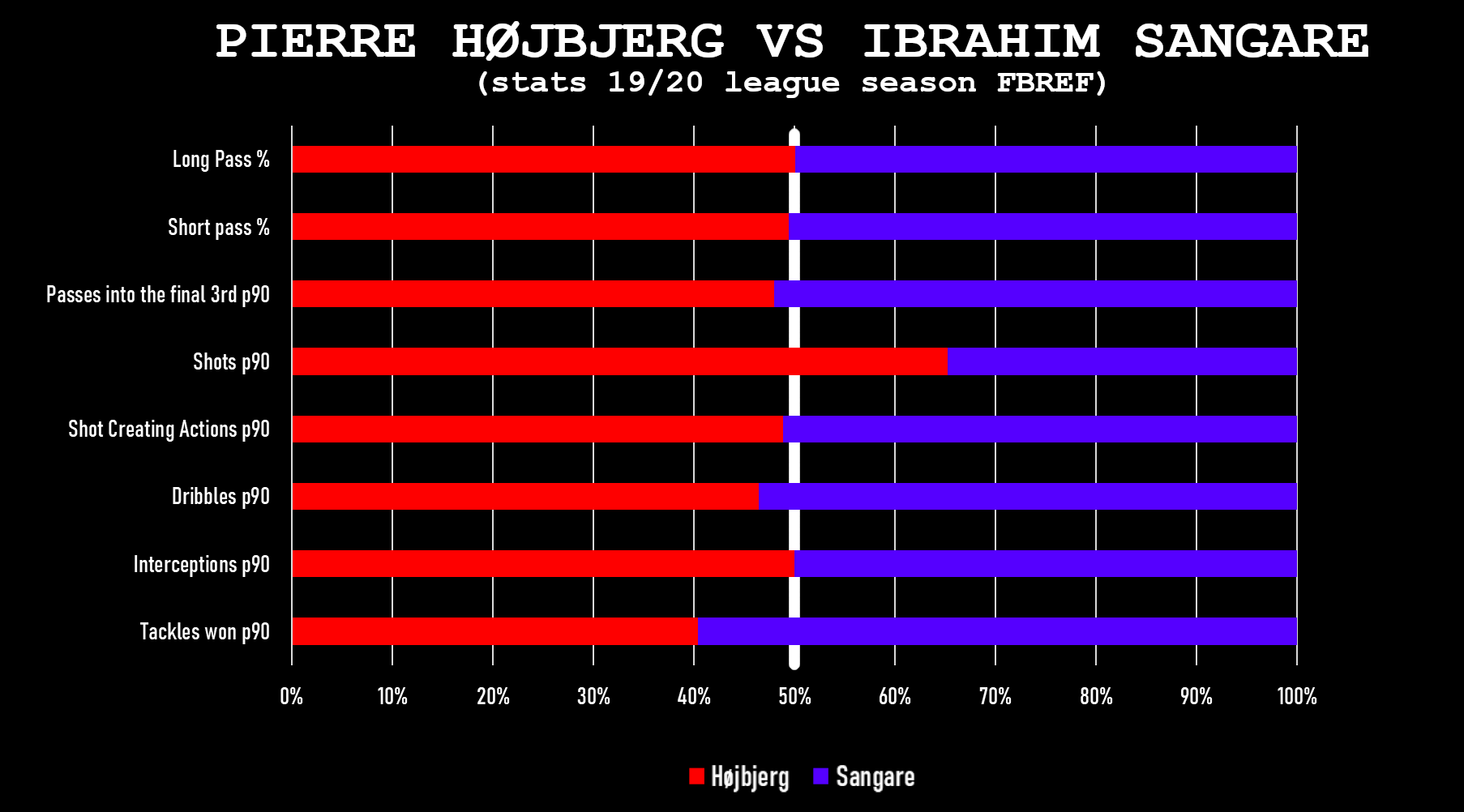 Sangare has played for Toulouse for over four years now and has consistently been touted as a high-quality talent. Sangare is an all-action midfielder who was practically running the midfield on his own in the last season, as Toulouse sunk to a horrible relegation. As one can see in the above graph, when compared to Højbjerg, Sangare ranks similarly, while completing more successful tackles than the Southampton number 23. He is also two years younger than the Danish international.

Although Toulouse have recently spoken about their desire to keep the Ivory Coast midfielder in southern France, Ligue 2 football is simply not good enough for the 22-year-old’s talents. Valued at less than £9 million, it should not take much to steal Sangare, particularly when the competition for his signature seems meagre.

Unfortunately for Southampton, creative forwards command a large fee. Even relegated players like Ismalia Sarr, who has been exceptional in the Premier League this season, will not move for less than £20-30million. Bundesliga players like Moussa Diaby and Leon Bailey will also come at a big fee. In Ligue 1, Jonathan Ikone of Lille would be perfect for Southampton; however, he has been strongly linked with Borussia Dortmund. Luckily, a bargain lies elsewhere in Lille.

Jonathan Bamba looked to be a superstar in the making in the 2018-2019 season. While Ikone operated in the centre of a Lille side which stormed to a second-place finish, 22-year-old Bamba would demolish the opposition right-backs. He scored 13 goals and assisted 3 in the league last season.

This league campaign though, his surface numbers have nosedived. Bamba had just one goal and four assists to show for his 26 games in the 2019-2020 season, yet his productivity has risen. He has taken more shots with more finding the target, passed more into the penalty area per game, averaged more key passes per 90, and averaged 0.9 more successful dribbles per 90 this season. According to the expected goals metric, Bamba should have at least four more goals as well as four assists.

Right now, the 24-year old’s value is at its’ Transfermarkt lowest since December 2018. This could be the only time Southampton can get a fantastic attacking player for a sub £20 million fee.

Even taking the most realistically expensive possibilities, these 4 signings should cost Southampton a maximum of £45 million. It would let the club address 4 key areas in a substantial way, with a high degree of confidence that it would improve the team. Saints fans should feel very excited if they see any of these players march out onto the pitch in September.