Rafa Benitez is renowned to be someone who believes in the ‘system’ of a football team. He does not shy away from changing roles of players or providing them with detailed instructions in order to fit the system of the team perfectly. His Valencia side won them the league in 2002 and 2004 as well as the UEFA super cup in 2004; both serve as good examples of displays of his philosophy and outlook on football.

Rafa Benitez arrived at Valencia in 2001 after Hector Cuper – who took the team to two successive Champions League finals and left to join Inter Milan. Benitez at that time was a young manager still building his reputation. He got promoted with Tenerife and was offered the Valencia hot seat. He won two league titles as well as one UEFA Super Cup with Valencia, which at that time was a commendable achievement for a young manager like himself. He took over an already well-drilled side, but the problematic aspect of Hector Cuper’s side happened to be Valencia’s poor performance in the league. Rafa Benitez was hired to give Valencia their first league title in over 30 years, and he delivered.

It is often assumed that Valencia merely capitalised on a period in which Barcelona and Real Madrid were in transition – or were weaker than usual. However, this assumption does a disservice to Benítez’s side, and a look through the two clubs’ squads during this period should put aside any doubts regarding the quality they boasted of. Barcelona continued to count superstars like Rivaldo, Patrick Kluivert and Marc Overmars amongst their ranks, while Real Madrid had just broken the world transfer record for the second successive season to sign Zinedine Zidane – adding to a squad already containing the likes of Luís Figo, Iker Casillas, Raul, and Roberto Carlos.

So, what was so interesting about this Valencia side which became the best Spanish team at that time?

Valencia lined up with a 4-2-3-1. This was an era where 4-4-2 was the most commonly used formation – with one striker dropping deep and acting as a deep-lying forward such as Eric Cantona with Manchester United or Dennis Bergkamp with Arsenal. Rafa Benitez can possibly be given the credit to use a 4-2-3-1 for the first time. This formation had 3 attackers behind the one forward with a 2 man pivot, shielding a powerful backline. 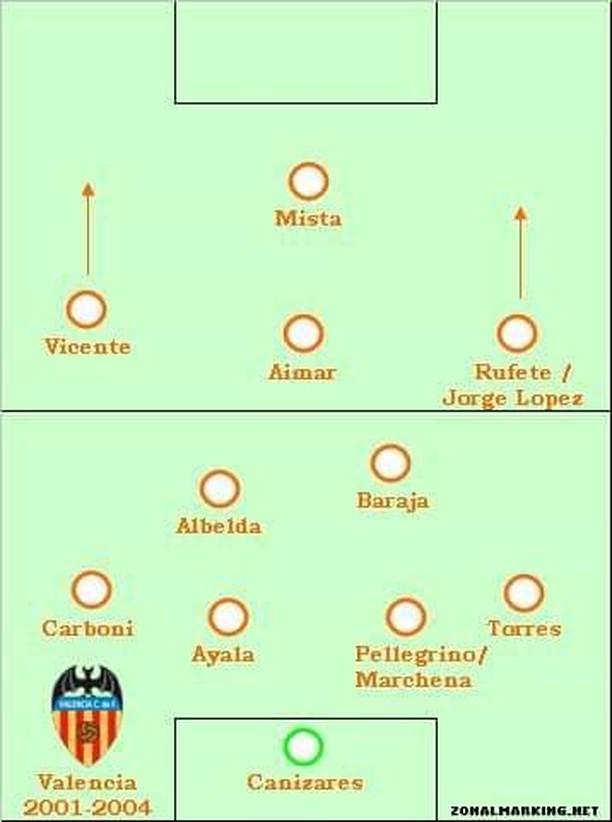 Benitez’s Valencia consisted mainly of hardworking football players. They perhaps were not the most skillful in terms of their techniques and ball circulation ability but happened to be willing to run as well as disciplined enough to obey a style of play – even if it meant sacrificing their individual strengths. Mista was a very good academy graduate, Vincente and Rufete were skillful wingers who worked hard in both the transitions, Roberto Ayala and Canizares were two world-class players at their prime in the defence but the main pivot and their glowing star was undoubtedly – Pablo Aimar. Pablo Aimar was an energetic, enigmatic midfielder who had traits that were comparable to that of Diego Maradona’s. His skill set coupled with the formation deployed by Benitez sung so harmoniously that it made people stand up and notice, more often than not, in awe.

Valencia, in the 2001-02 season, was probably one of the worst title-winning team in terms of attack. They scored a mere 51 goals but were the master of the 1-0 wins. Their defensive shape and organisation helped them get over the line and one doesn’t need to repeat the famous Sir Alex Ferguson quote with regards to the same. In the second title-winning campaign though, they conceded the same amount of goals (28) but scored 20 more. Mista had matured and had become a very lethal striker. Their defensive organisation and solidity helped them get over the line and clinch the La Liga title. Now, some may argue that they weren’t revolutionary or weren’t exactly a fluid attacking team  – but to call them dull and boring would be rather unfair.

Valencia, while defending quickly, used to convert into a 4-4-1-1 with wingers Vincente and Rufete dropping back and helping their midfield. The two backs of four were narrow and vertically compact. Their defensive shape was the key to their success. They used a zonal pressing system in which each person had different zones to focus on. They would initiate a high press only when the ball was in their opponent’s half – thanks to Mista and Aimar. If they were unable to win the ball back, then they would only initiate a high press in the final third or in the wide areas. If one of the midfielders went out of position while pressing and trying to win the ball back, Pablo Aimar used to drop deep and cover for him. They were the masters of zonal marking. 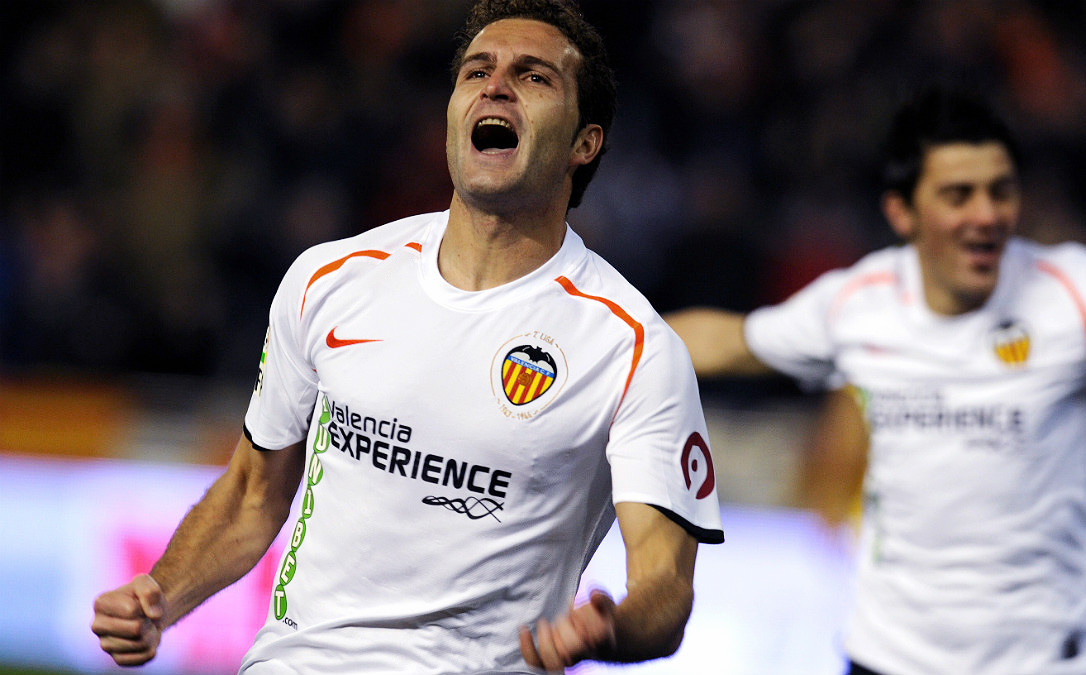 While attacking, they were direct and would move the ball through channels very efficiently. Their two holding midfielders – Albelda and Baraja – were key to their ball circulation. Baraja had relatively more freedom to move up the pitch and occupy half spaces acting as a classic box to box midfielder. They would stay back and distribute balls from the deep. Vincente and Rufete used to come towards the inside a tad but would usually stay wider. Carboni and Torres would push up and support their wingers.

Their emphasis was on direct passing, finding half spaces and being quick on the counter-attack. Pablo Aimar, as mentioned earlier, would drop a little deep in between the two backs of four, as 4-4-2 was the very standard formation to find half spaces. He, then with his great dribbling ability, would look to release either the winger or the striker who then shot or put in crosses from out wide.

Valencia didn’t care much about possession or circulating the ball. They were one of the finest direct counter-attacking teams of their generation. They neither had any fixed shape while attacking nor any fixed instructions to any players. The front four could attack as they pleased in order to be quick as well as direct and catch the opponents when they were at their most vulnerable. Due to Baraja and Aleblda’s positioning, Valencia also had a block of four players ready to defend in case the opponents were looking to counter-attack. 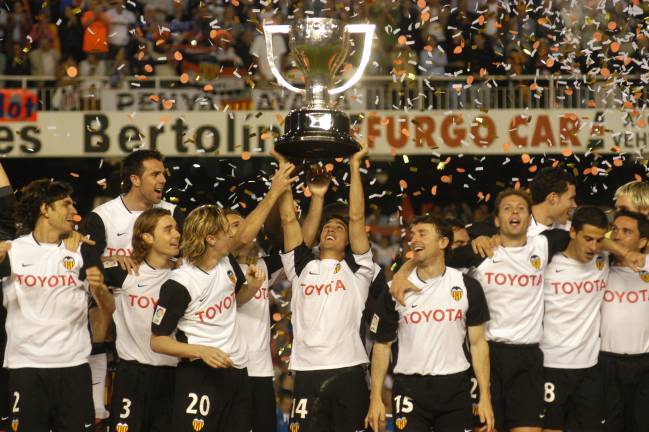 To summarise – Valencia, under Rafa Benitez, were organised, tough to beat, direct as well as efficient. They were the masters of 1-0 wins and their toughness and ability to get results got them over the line and won them the league in 2002 and in 2004. Their brief spell of dominance continues to be remembered by La Liga romantics since it is not always that either Barcelona or Real Madrid don’t dominate the league. Valencia, despite not being the most entertaining, were one of the best sides in Europe at their time and should be remembered the same way – rather than being mistaken for a dull, boring side.

Image via Diario AS