The Champions League final promises an end-to-end game between two of the most entertaining sides in the world. On the one hand, we have a five-time European champion, Bayern Munich, who have a 100% record in the competition. Regardless of the result in the final, fans will remember this Bayern outfit as one of the best to feature in the history of the Champions League. The German champions have put on some of the most dominating displays in this competition’s history. Bayern have scored 42 goals in just ten games. A total that includes a 7-2 win versus Tottenham Hotspur, last season’s finalists. A 7-1 aggregate win against Frank Lampard’s Chelsea. The Bavarians cemented their places in history with the 8-2 hammering of FC Barcelona. The duo of Serge Gnabry and Robert Lewandowski (24) have scored just one fewer goal than Paris Saint-Germain(25). This Bayern team are a truly terrifying proposition.

In contrast, Paris Saint-Germain may not have the numbers to scare their opponents, but they have an incredible collection of talent. In Neymar Jr and Kylian Mbappe, Paris have two of the most skilful players in the game. Once you add the likes of Angel Di Maria, Marquinhos, Thiago Silva and Marco Verratti, the Parisians have the squad to go face-to-face with anyone in the game.

We are guaranteed to have a new winning coach as Thomas Tuchel, or Hansi Flick will lift the European Cup for the first time in their careers. Let’s analyze the key battles which will determine the winner.

During the Niko Kovac tenure, Bayern’s pressing was unorganized and lacked intensity. But Hansi Flick has added a sense of urgency and direction to Bayern’s high press.

As the graphic below illustrates, Bayern are one of the best team at winning the ball high up the field. The Bavarians try to block opposition’s passing options and try to overload various areas of the pitch to force mistakes. Barcelona were overwhelmed by the intensity of the German side. Thomas Tuchel must find a system where his players do not fall into the traps of Bayern. 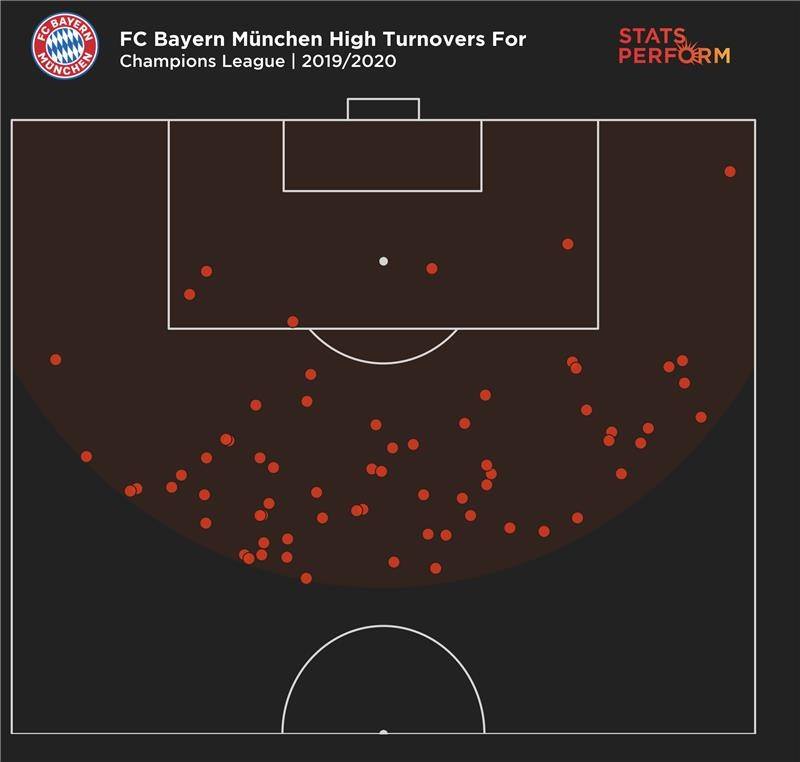 Ander Herrera, Marquinhos, Paredes and Gueye are brilliant footballers, but Tuchel may have to gamble on Marco Verratti’s fitness. The Italian midfielder is a master of ball-retention, and line breaking passes. Verratti’s availability will have a massive impact on this game. Or Paris can play long balls to go over Bayern’s pressure. RB Leipzig and Atalanta also played with a high line, obviously not as ludicrously high as Bayern’s. And it was refreshing to see that Tuchel’s team were flexible in their approach.

Hansi flick’s team deploy the highest backline in Europe. The Germans apply intense pressure on the opposition, that’s why their own defense plays so high. Bayern don’t want to leave space between the lines, in case opposition can play through their pressing. Just like any other tactic in football, this has benefits and drawbacks. We witnessed Bayern’s pressing in all its glory against Barcelona, when 6 out of 8 goals were created with intense pressure. However, we saw Lyon and even Barcelona getting chances once they played balls over the top of Bayern’s back-four. This is where the skills and speed of Mbappe, Neymar and Di Maria can really hurt the Germans.

Memphis Depay had a one-on-one against the goalkeeper, Karl Toko Ekambi, Lionel Messi hit the Bayern post, and Jordi alba created an own-goal by running behind Bayern’s high line in the last two games. Thomas Tuchel has used a fascinating tactic in the last two knockout games against Atalanta and RB Leipzig. 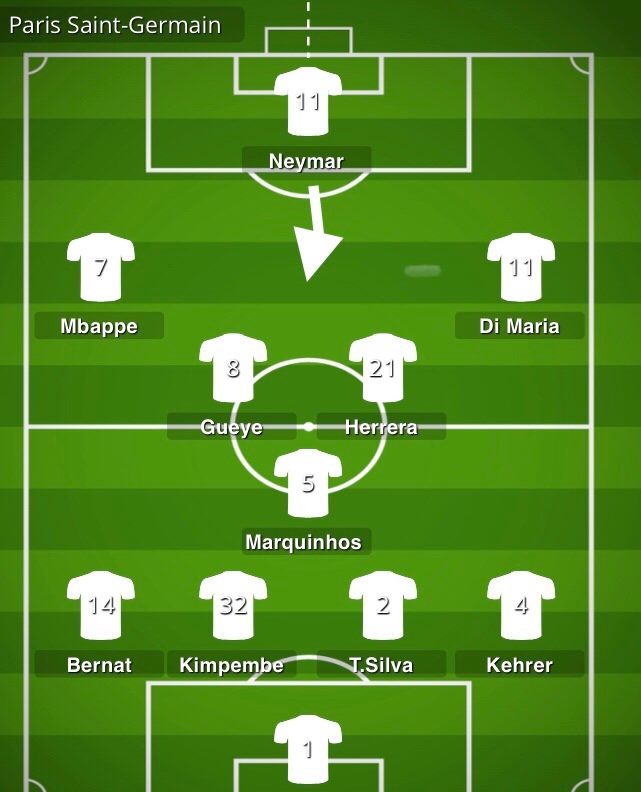 As this setup shows, Tuchel has used the Brazilian through the middle on occasions. Neymar’s one-on-one chance against Atalanta was a result of this tweak by Tuchel. Neymar hit the woodwork with another glorious opportunity against Leipzig; this tactic can hurt Bayern Munich as well. Having Mbappe and Di Maria in wide positions can help them use their dribbling and passing to create chances. Neymar dropping deep to receive the ball can be helpful to cause disorganization in the Bavarian’s defense. It will also aid PSG’s buildup against Bayern’s intense pressing.

We must also remember that Paris Saint-Germain’s front three regularly rotate, as we saw for their second goal against Leipzig when Di Maria was in the middle. But this adjustment of Neymar dropping deep, and then turning to run at the defense is very useful.

PSG’s Full-backs vs Gnabry and Coman

Ivan Perisic is a reliable winger, with impressive skills and an admirable work-rate but, Kingsley Coman is likely to start after recovering from injury. 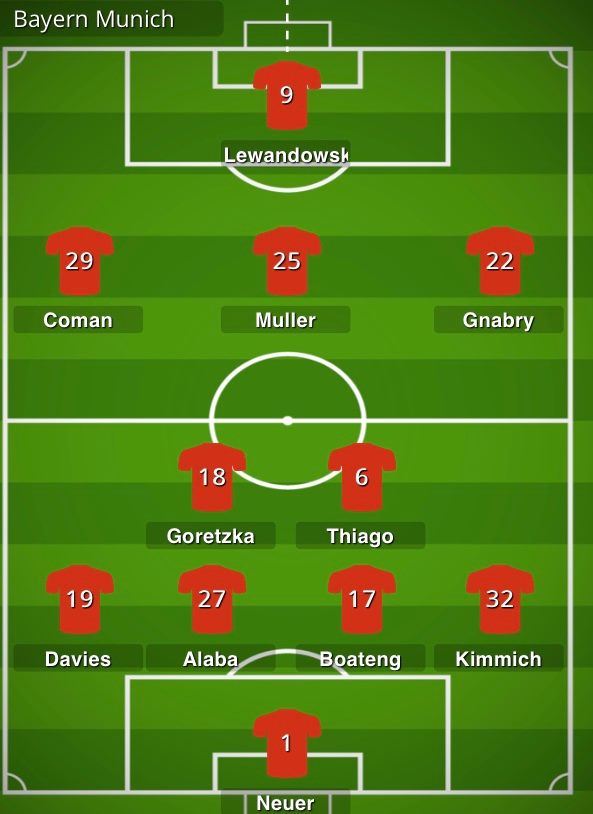 Gnabry and Coman can beat the opposition full-backs with speed and skills, and I’m predicting that at least one goal will be created from the duels between Bayern’s wingers and PSG’s full-backs. Bayern Munich sold Juan Bernat after his defensive abilities were questioned. Tilo Kehrer, a centre-back, is filling in at right-back after Thomas Meunier left the club. This is clearly an area for Bayern to target. We have discussed the importance of Mbappe, Neymar and Di Maria. We are familiar with their elite skillset, but this game might come down to the defensive contribution of PSG’s front three.

Lewandowski may have 15 champions league goals, but Bayern are not a one-man team. They attack from all directions. Aside from goalkeeper, Manuel Neuer and defender, Jerome Boateng, every Munich player has scored this season. Joshua Kimmich (7 goals, 16 assists) and Alfonso Davies (3 goals, 10 assists) are heavy contributors and fundamental to Bayern’s attack. Mbappe and Di Maria can be tasked with tracking the opposition full-backs. Di Maria possesses admirable work-rate, and Mbappe showed his willingness to defend in the 2018 World cup. Another solution would be to have Neymar against Kimmich, Mbappe can be deployed through the middle to use his blistering pace on transitions. Whatever Tuchel decides, it would be suicidal if PSG’s wide forwards do not track back. Barcelona tried leaving Luis Suarez and Leo Messi up-field and look what happened to them.

Robert Lewandowski has been the most in-form player this season, PSG will have to stop the Polish International. But they must not forget to plan for a rejuvenated Thomas Müller. He was left out of Niko Kovac’s plan. Müller was also a deemed surplus to requirements by the German national team coach. However, the Bayern legend has scored 14 goals and dished out 26 assists this season. The two Bayern full-backs and both of the wingers can create havoc with speed and dribbling, but no one equals Muller’s understanding of space. The “Raumdeuter” is the organizer of Bayern’s press, and he is their vocal leader in attack.

Muller will also be the one to cover more distance than everyone else, as he did against Lyon in the semifinal. Muller’s movement is unpredictable, his style is unorthodox, but no one will be hungrier than him. Muller will lineup as the number 10 in Bayern’s 4-2-3-1, but he will constantly move around to find space. He can create overloads with the wide players, and he can get in the box whenever Lewandowski moves wide or drops deep. Tuchel will be advised to instruct one of his midfielders to keep an eye on Muller, the master of creating space.

These two are the most balanced sides in the game. Both teams also have game-changers on the bench. I’m going for a 3-2 or 3-1 Bayern win.