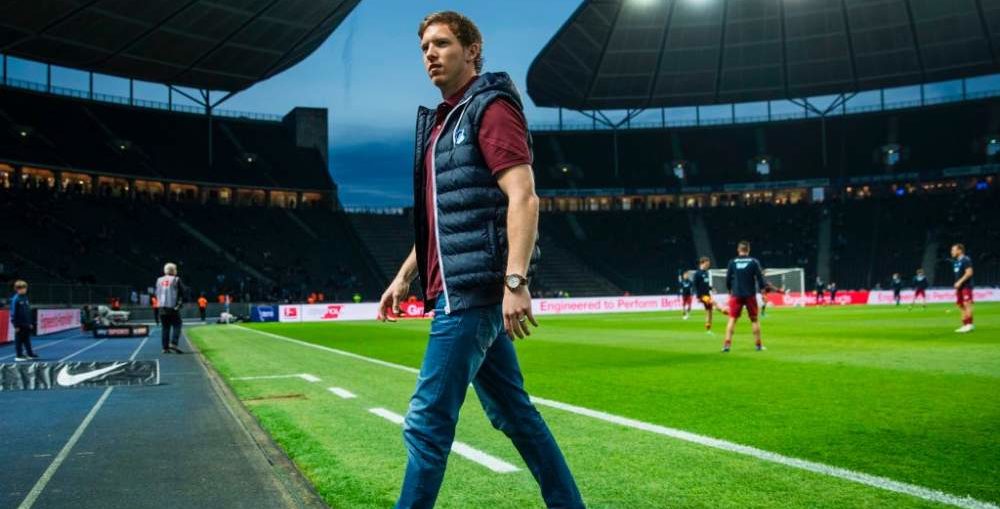 Born on the 23rd of July 1987, Julian Nagelsmann had a dream that every football fan once had in their lifetime; playing football at the highest level. Nagelsmann had represented 1860 Munich and Augsburg at the youth level, playing in the centre of the defence. Unfortunately, persistent knee problems had forced him out of the beautiful game at a very young age that left his dreams shattered. Nagelsmann pursued Business Administration for 4 semesters until moving to Sports Science. He had worked under the tutelage of Thomas Tuchel at Augsburg and has learned a lot from the former Dortmund boss.

He used this to get into coaching and was the assistant coach at 1899 Hoffenheim in the 2012/2013 season and was also coaching the U19 team at Hoffenheim, which had won the U19 Bundesliga under Nagelsmann. Tim Wiese had famously nicknamed him “Mini-Mourinho” due to his coaching methods. Nagelsmann was appointed head coach at Hoffenheim on 27th October 2015, after Huub Stevens had resigned due to health issues.

This marked the beginning of Nagelsmann’s career as a manager at the age of just 28, making him the youngest ever Bundesliga manager in history. Nagelsmann’s first objective was to ensure survival for Hoffenheim and avoid relegation which he did, winning 7 of the 14 remaining matches of that season, and finished a point above relegation. For someone whose dreams were cut short very early on in life, Nagelsmann managed to work his way back to football and still become a superstar in management. His key attribute when it comes to management has been his ability to get his players together and unite them. Naglesmann was quoted saying “Football is 30% tactics and 70% social competence.” This shows what he brings to the table as a manager and as a leader of the club.

His ability to bring the best out of his players and utilize them in the best way possible has earned him respect in the Bundesliga and beyond. The fact that he knows what he wants and with the limited financial backing he has, makes him stand out in an era where managers spend big. Nagelsmann followed up the next season with an outrageous 4th place finish in the Bundesliga, the highest in Hoffenheim’s history, and sealed qualification for the UEFA Champions League for the first time which further enhanced his reputation as an upcoming manager with sharp footballing expertise.

These performances had caught the eye of many top European clubs, but Nagelsmann had opted to stay with Hoffenheim despite rumours linking him to many top jobs. What makes Nagelsmann so different from his managerial counterparts is that he firmly believes in developing a team that sticks together, and plays to the strengths of each of his players. He is known to mix technology heavily into his training regimes and in-depth analysis of games and tactics makes him a mastermind. Due to his growing impact, many players have expressed his desires to play under him. Despite losing his key men Wagner and Sule to FC Bayern Munich, he has made notable changes to his team in a way that he could cover up and still manage to bring results.

Under Nagelsmann, players like Brandt and Gnabry have managed to shine and develop into better players. Nagelsmann represents a new generation of managers known as “laptop managers.” We might be in for an era of young managers, and Nagelsmann might even be the pioneer of this. His methods are effective and are something the old-time managers might be afraid of; he might even change the way managers work in the near future. Hoffenheim are blessed to have a figure like Julian Nagelsmann, who is now an icon in the Bundesliga, and his legacy will remain. For someone whose career was cut short due to injury, he has made quite an impact in modern day football.

He also shares some similarities with Sir Alex Ferguson where the manager was the superstar at the club, the players felt privileged to play under him. What this does is it allows the club to function smoother, there is less speculation over the manager’s future, there are fewer clash of egos, and this is vital for a club to function and put out stellar performances on the pitch. Recently, players stealing the spotlight has caused chaos in the club where the manager isn’t as respected as he should be. Hopefully, Nagelsmann changes that and uses people management skills and puts a team together that can win trophies.

Nagelsmann has recently been linked with the hot seat at Real Madrid, with the departure of Zidane, Real Madrid are in need of a new leader, manager, and tactician; but Nagelsmann has graciously turned down the opportunity. What does the future hold for Nagelsmann and his new generation of managers is a question that only time can answer, we hope to see more of him and wish him the best.

Image 1 via The National

Julian Nagelsmann – The Tactics Behind a Pioneer