Blackpool Football Club, the perfect metaphor for “How low can you go?” Let’s go back a few years, back to when Chelsea acquired the services of Fernando Torres from rivals, Liverpool. It’s 2010, Blackpool find themselves in the top flight for the first time in 39 years, after a thrilling 3-2 win at the Championship Play-off at Wembley. The Oystons, owners of the Lancashire side, believe that Ian Holloway is the right man to keep the tangerines up in the top flight. A team with personality, characterised by Holloway’s new attacking style of football, and a new outlook on how to survive in the Premier League, Blackpool are quickly becoming fan favourites.

It’s safe to say that those were the last few days of glee for The Seasiders as the club has been on a rapid decline ever since and now find themselves in the League One after one of their most controversial seasons, largely due to the owners, The Oystons.

The Oystons have been the principle owners of Blackpool since 1986. The board of directors, after an emergency meeting, put the club on the market after councilors rejected plans to sell Bloomfield Road, the home of Blackpool, for a supermarket site in a £35 million redevelopment scheme. The club was then sold to the controversial Owen Oyston for a mere sum of £1. Blackpool were pinballing in the depths of English football, sacking 7 managers in the space of 10 years since the Oystons bought the club.

Owen Oyston was well known among the Lancashire faithful but not for the right reasons. In 1995, after a high profile police raid on a modeling agency in Manchester, nine charges were leveled against him, including four rape charges. He was initially arrested on 9 February 1995. He was acquitted of the first two rape charges but was found guilty on the third trial, that of a 16-year-old girl. Owen Oyston was then jailed for 6 years in 1997. Oysten claimed to be innocent. He said that during the third trial in 1996, he was offered control of Manchester United, but he refused to desert Blackpool by relinquishing his family’s interest in Blackpool FC. 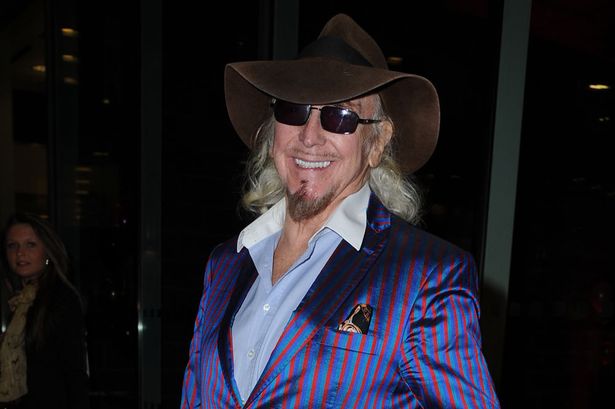 After serving three years and six months in prison, Oyston was released on parole on 7 December 1999. Oyston remains the majority shareholder at Blackpool F.C. and is still listed as a director. He made his first public appearance at Bloomfield Road since his release, in February 2002 at the opening of two new stands at the stadium. Oyston was also instrumental in the club bringing in Latvian businessman Valeri Belokon to invest into the club in 2006. Belokon bought a 20% stake in Blackpool Football Club in 2006 and was named club president. In June 2007 he stated that he was prepared to increase his stake in Blackpool from 20% to 50% following the clubs promotion to The Championship.

Brief stint in the Premier League

Belokon set up a new transfer fund, into which he added a “considerable amount” to invest in new players identified by Holloway. Days later Blackpool broke their transfer record by signing Charlie Adam from the Rangers for £500,000. Blackpool went on to finish the season in sixth-place, claiming a playoff spot. The Seasiders went on to beat Cardiff City 3-2 in the Playoff Final and gained entry into the Premier League.

The Tangerines got off to a great start by beating Wigan Athletic 4-0 in their first ever premier league game. They were on top of the top flight table for a few minutes until Chelsea whopped West Brom by 6 goals. Their success was short-lived as they fought for survival for most of the season. They were troubled on and off the field with construction work at Bloomfield constantly being a burden both in terms of finance and logistics. 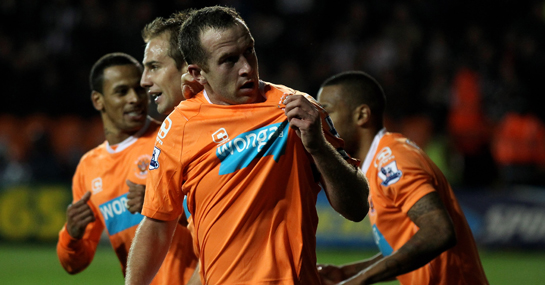 In January they were subjected to a £25,000 fine by the Premier League, for fielding what they believed to be a weakened team against Aston Villa. Ian Holloway had made 10 changes to the team that faced the Villains in the first half of the season. Exactly 365 days after their promotion to the top flight, they were relegated back to The Championship, after losing to the then champions Manchester United. Blackpool Finished their season in 19th place with 39 points. They had won 10 games which included a home win against Tottenham Hotspurs and a win against Liverpool at Anfield.

Blackpool left the premier league with their pockets full as they smashed their outgoing transfer record when they sold Charlie Adam for £7 million to Liverpool. They made it to their second consecutive playoff final the following season but ended up on the losing side, with West Ham heading to the top flight.

Ian Holloway then left the club in November 2012 to take charge of Crystal Palace who were also seeking the golden ticket to the Premier League. Holloway guided them to the Premier League a year later, only to be sacked the very next year. Meanwhile back in Lancashire, Blackpool had dismissed 3 managers in the space of two seasons and hired Jose Riga before the start of the 2014/15 season.

Blackpool’s problems had just started as two weeks before their first game of the new season, 27 players decided to leave the club, citing poor management as the reason for leaving. Yet the club’s chairman, Karl Oyston, Owen’s son, was unruffled. In fact, he thought that the club was in a strong position.“There is no panic, In fact, I see it as a benefit. It allows the manager to bring in his own team, as opposed to picking up a squad that is already overloaded and he doesn’t think is good enough,“ he said.

But Glenn Bowley, the Chairman of the club’s official supporter’s club said otherwise.“The squad is not just thin, it is almost non-existent. There seems to be a significant lack of progress. It is a complete and utter shambles.” The incredible lack of investment in the club, playing staff and training facilities since Blackpool’s unfortunate relegation from the Premier League had seen them become somewhat of a laughing stock in England’s second division.

It’s a long way down

Riga was sacked in late October after just 15 games in charge and was replaced by Lee Clark. Later that season Blackpool were relegated to League One. Adding insult to injury, the final match of the Championship season against Huddersfield Town was abandoned in the second half following an on-pitch protest by hundreds of Blackpool supporters voicing their concerns over the actions and management style of the directors and owners. Subsequently, Lee Clark resigned and was replaced by Neil McDonald. He was also sacked as Blackpool were relegated to League Two. McDonald was replaced by Gary Bowyer, Blackpool’s eighth manager in three seasons.

It’s all in the family

The Oystons were under fire as the fans blamed them for how the club had turned out. There were constant accusations that the Premier league revenue was not invested in the club or for the club’s interests. In September 2015, Belokoņs initiated legal action against the Oystons, alleging improper use of club funds. This put fuel into the fire and there were “Oyston OUT” chants blasting at Bloomfield Road. Ever since there has been a strained relationship between the fans and the Oystons. Belekons claimed that he had zero involvement in club activities after their surprise promotion to the Premier League, a promotion that was achieved after some financial backing from the Latvian businessman. 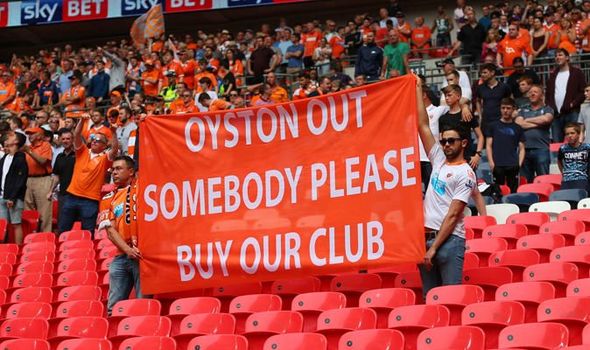 Playing in the Premier League not only improves a club’s brand but also boosts its financial prospects. It was reported that Blackpool received close to £90 million in prize money as a result of playing in England’s top flight. The common accusation from the fans was that there was no evidence of any investment of these funds for the benefit of the club. The Oystons were alleged to have used the club’s funds for their personal interests.

Many have also pointed to Oyston’s property development background which had always been a cause for concern amongst the fans. They believe the lack of investment in the club is indicative of a long-term business plan to attempt to take advantage of the prospective value of its real estate. If this is the case then Karl Oyston has done nothing to hide his derision for the club with the majority of his exchanges with supporters ranging from downright disrespectful to legal action resulting in elderly supporters being required to pay damages of £20,000.

The lack of care and pride had been astonishing. “Four years since they lit up the Premier League, players who turned out each week in the top flight still talk about buckets positioned inside in the gym to catch dripping water and one particular individual who’d rather have his breakfast at McDonald’s around the corner than eat what was dished up before training.” – A newspaper report in 2015.

Players were made to wash their own kits. There were no support staff or equipment to help the players. One player even opted to pay his own medical fees in 2015 after limping out of a reserve game. He had been returning from a previous knock which had been misdiagnosed and those minutes aggravated a much more serious injury. Striker Steven Davies opted to drop down a division for a loan spell at Sheffield United and also questioned Blackpool’s medical department. Supporters traveled to Bloomfield Road each week to protest before games and then turned away – 500 of them choosing to watch non-League AFC Blackpool instead.

Where’s all the money gone?

Owen Oyston has owned the club since 1987 and paid himself a salary of £11million on the back of their season at football’s top table, claiming he was ‘owed’ that amount after the support he had afforded the town. The atmosphere on the Fylde Coast is toxic. In official accounts published in March, Blackpool revealed monies loaned to their parent company, Segesta Ltd, now stand at £27.7m. It has been proven beyond any doubt that Segesta has been used to finance other loss-making Oyston-owned businesses. The contempt between the two camps is mutual. It’s the only thing they agree on. Incredibly, the Oystons have turned the Lancashire faithful into a hate mob. Thousands turn up every week to chant, scream and vent. The people who suffer are those who just want to go and watch football with their family and friends.

Feature Image via The Guardian

Facts and some anecdotes have been taken from Wikipedia