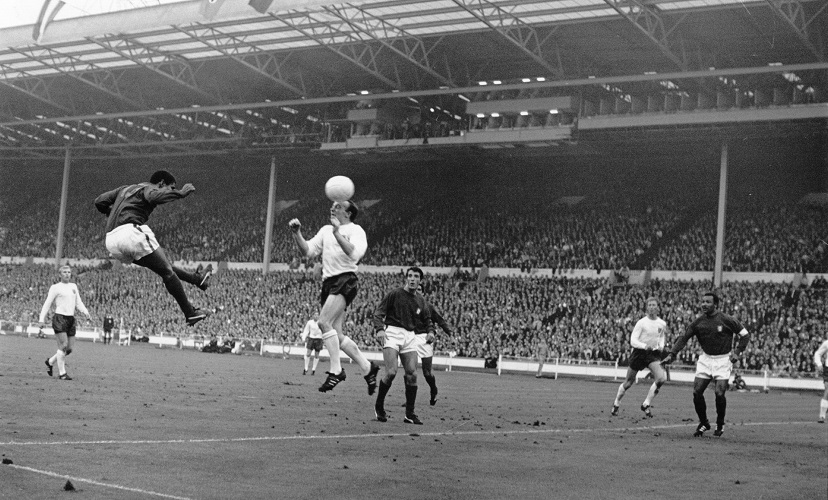 27th July 1966: Eusebio of Portugal (left) and Nobby Stiles of England in a duel for the ball during their World Cup semi-final match at Wembley, which England won 2-1. (Photo by Central Press/Getty Images)

Living in the Messi-Ronaldo era, we have gifted our eyes to a decade of stunning performances. Performances, that have rendered us spellbound on a weekly basis. Then there are certain players who in their own right have made very important contributions in the world of football, but are often get ignored in larger football discourse. This is not restricted to the current era, but also includes tales of underrated legends from our previous generations.

One such story is that of a boy who overcame numerous hurdles to make a name for himself – a certain World Cup-winning Englishman – Nobby Stiles—being short and a person who lacked physique he was often shunned by many clubs who were willing to offer trials. But destiny and fate had their say here, Nobby caught the eyes of then Manchester United manager, Sir Matt Busby and was soon a part of their setup. He made his debut in October 1960 against Bolton Wanderers as a full-back but seeing Stiles’ ball-winning and distribution skills Matt Busby decided to field him in an unfamiliar role back then as a holding midfielder guarding the defense.

The passage of play would usually involve Stiles chasing the opponents to get the ball and help United hit the opposition on the break by playing the football in central channels. Given Stiles’ wide range of passing skills, the team was able to build up from the back. Sometimes Nobby would wait for one of the full-backs/wingers to be free such that he could put a cross into the box on the overlap.

He was as crucial as George Best and Sir Bobby Charlton in United’s European Cup win in 1968 beating Benfica 4-1 in the finals because kept one of the contemporary greats Eusebio silent throughout the game.

This wasn’t the only time Stiles got the better off the Portuguese great. In the 1966 World Cup semi-finals, the Three Lions were to face Portugal, and the latter had a fantastic run going into the game beating 1958 and 1962 champions Brazil. They were also considered favorites to lift the cup. Eusébio was in prolific form scoring nine goals in the tournament and eventually winning the Golden Boot.

Two incidents in the years leading up to the semi-final match were especially significant. England had played Portugal in a 1-1 draw in Sao Paulo in the 1964 Nations’ Cup. Terry Paine claimed that team-mate Noby Stiles had left a psychological scar on Eusébio as he marked the Portuguese out of the game.

“The modern-day equivalent of Nobby would be N’Golo Kante,” says Paine, who himself was part of the 1966 squad and played in the 2-0 group win against Mexico. “Nobby was what you would now call a midfield destroyer. He didn’t take any prisoners and, to be completely honest, I think Eusébio was a little bit afraid. I think there was a part of him that didn’t fancy it.”

The other incident involved the Football Association. They were against the idea of Alf Ramsey selecting Nobby Stiles for the game vs Portugal because his style of play garnered harsh criticism from pundits of that era. His tackling skills, rash interceptions and ball-winning abilities were looked down upon back in the day. However, Ramsey was having none of that and made it very clear that if the FA tried to intervene, his staff and he would step down in the middle of the tournament. Stiles’ inclusion in the game added all the more pressure on him to perform to his near best to prove the FA wrong and repay the faith shown in him by his manager. The rest, as they say, is history.

England, who were in their usual white shirts, took the lead after 30 minutes when left-back Ray Wilson passed the ball over the Portuguese midfield towards Roger Hunt. While surging towards the goal, Hunt was challenged by goalkeeper Jose Pereira, and the rebound landed in the worst possible place for Portugal: at the feet of Bobby Charlton. Utterly deadly from that range, he finished crisply with his right instep.

The 50 minutes that then followed were tense but of the highest quality. Stiles was immense in shadowing Eusébio. He kept prime Eusébio quiet for most parts of the game in what was the biggest game of their careers. A commendable feat. Jack Charlton was having a stormer as well, as he kept striker José Torres at bay. It was, according to Paine, a pleasure to have a touchline seat that day.

The 80th minute proved decisive. Cohen chipped a 40-yard pass deep into the Portugal half to Geoff Hurst. The West Ham striker turned and took a touch before rolling a pass to the edge of the area, where Bobby Charlton blasted a trademark rising shot. The Wembley crowd broke into a chorus of “Oh when the Saints go marching in”. The mutual sportsmanship was such that several Portugal players shook Charlton’s hand.

And yet two minutes later it was 2-1. Torres finally did get the better of Jack Charlton who, in desperation, used his arm to prevent a certain headed goal.

The penalty, scored by Eusébio, was the first goal that a formidable England defense of Gordon Banks, George Cohen, Jack Charlton, Bobby Moore, and Ray Wilson had conceded in more than seven hours of football. It ensured a dramatic finale, with Banks then making an excellent save from Mario Coluna to ensure England’s place in their first and only World Cup final.

Eusébio was crying as he left the pitch in the same vein as Paul Gascoigne in Turin 24 years later, the match would become forever known in Portugal as the “game of tear”‘.

As expected, Bobby Charlton received most of the headlines, but he graciously acknowledged the identity of England’s match-winner that night in his book – ‘1966: My World Cup Story’ – “Nobby Stiles was handed the job of containing the force and talent of a player who was moving towards the zenith of his powers” wrote Charlton.

As one of the three English players to have won both the European Cup and the World Cup, Nobby Stiles will go down as one of the greatest players the game has seen and arguably the greatest defensive midfielder the nation has produced till date.