You are here
Home > News > Back to the Future: Newcastle United Season Preview 2018-19 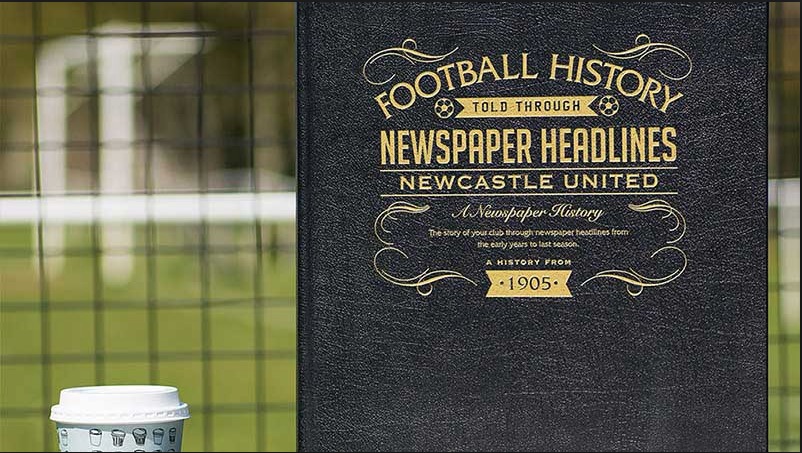 It’s the summer transfer period and Newcastle United have just added the world’s most expensive player to the squad that finished second in the Premier League last season.

For all those whose memories don’t stretch back as far as the mid-90s, that sentence is not fiction. In July 1996, ahead of the likes of Manchester United and Barcelona, Newcastle United signed Alan Shearer for a world record £15 million.

With Shearer, the Toon would thrash title-holders Manchester United 5-0, and again finish runners-up, making it a run of 3rd, 6th, 2nd and 2nd in four seasons – the best the Magpies had achieved since their spectacular and also very aesthetically pleasing 4th, 1st, 4th, 1st, 4th, 1st, 4th between 1904 and 1910.

So far this summer, with just over 24 hours until the transfer window closes (at time of writing) Newcastle’s manager Rafa Benitez has brought in six players – four permanently and two on loan – with a total spend of £18.5 million. The Magpies have received an estimated £39 million for outgoing players. Rumours are circulating feverishly about new deals, but any improvement on this total looks unlikely.

From a purely mathematical perspective, we can either admire Benitez’s shrewdness in the marketplace or deem that this transfer window has been of great benefit to Newcastle owner Mike Ashley and his fat back pocket.

But Newcastle’s off-pitch melodrama is a world in itself; how the team fits together on the field is the practical question.

Benitez has made it clear that he likes at least two players competing for every position. He has sought a ball-playing goalkeeper since he took over, and it looks like Slovak Martin Dúbravka, signed for £4 million from Sparta Prague after a successful loan last season, fills that position.

Chelsea’s Brazilian Wing-Back, Kenedy, also impressed on loan. Benitez was unable to sign him permanently but managed to repeat the loan, this time for a full season with an option to buy. He will be the number one choice for the wide left slot, ahead of a previous Chelsea loanee, Christian Atsu.

The four remaining deals show that Benitez can only buy if he generates funds through selling.

In Central Midfield, the 22-year-old Spaniard Mikel Merino engineered his own exit to Real Sociedad for around £10 million and Benitez brought in Ki Sung-yeung, age 28, on a free, probably to be third in the pecking order behind Jonjo Shelvey and Mo Diamé.

Other priority areas for Benitez were Left-Back and Centre-Back. Swiss international Central Defender Fabian Schär came in the revolving door as Chancel Mbemba left. Not a bad switch as Benitez had demonstrated no faith in the exiting Congolese. But then Florian Lejeune – one of last season’s success stories – was stricken by cruciate ligament problems, so Benitez is still looking for a Central Defender.

Online speculation has linked Newcastle with numerous Left-Backs – from Everton’s Leighton Baines, to PSG’s Stanley N’Soki, to Bristol City’s Joe Bryan. None has yet signed.

Last season, Newcastle won £21 million for finishing in tenth place. They built a tight defence around captain Jamaal Lascelles and achieved a goal difference of -8 which lifted them above the two other teams on the same points, earning almost four million more pounds for Mr Ashley than if they had finished twelfth on the same points but with a worse goal difference.

However, the Magpies lost ten games 1-0. Goals from a decent goalscorer would have converted some of those defeats into draws or even wins. Another five to ten points and Newcastle would have been pushing for Europe!

Newcastle had four strikers to choose from last season: Ayoze Pérez, Dwight Gayle, Joselu and Aleksandar Mitrović. Perez and Joselu are staying, while the other two have moved on.

Gayle is lightning quick but doesn’t have the composure to make him a 20-goals-a-season player at the top level.  After some hesitation, he’s gone for a season in the Championship, much more his level, with West Brom. In return, and for an additional £2 million, WBA have loaned Newcastle their Venezuelan striker, Salomon Rondón, who is Benitez’s dream: big, strong, and skilful, a team player, a man who defends from the front. He just doesn’t seem to score many goals.

Mitrović is too hot-headed and unpredictable to be Benitez’s type, so he’s signed for Fulham, who he helped win promotion last year while on loan.

In return, Japan striker Yoshinori Muto arrives at St James’s Park as an unknown quantity, but at least the Newcastle club shop can make use of some of the mountain of letters m, t and o that they stockpiled after promotion two years ago when Mitrović was the hero.

Of the two who are staying, Pérez divides the fans, but he finished last season strongly, as top scorer with ten goals. Joselu meanwhile doesn’t divide the fans; they all think he’s rubbish.

In summary, it’s been another frustrating transfer window for the Newcastle fans and manager, while possibly not for the owner. Take away a handful of untried youngsters, and the squad (at the moment) consists of only 23 players. But on balance, things look slightly better than at the start of last year. Most of those coming in look like improvements on what Benitez had to choose from last season. Most of those going out would not have been picked anyway. 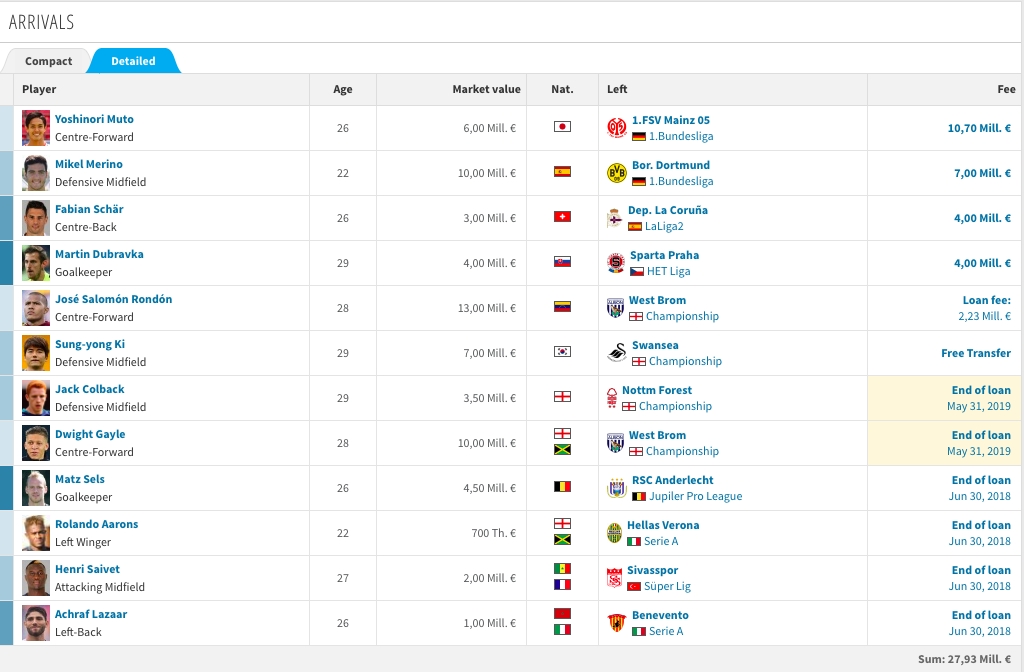 Newcastle United would love to repeat last year’s success and finish in tenth place. A more likely prediction will be they will finish around 15th, but most fans will be satisfied just to avoid relegation.

The heartache for all football fans lies in the gap between hope and reality.

But while expectations for black-and-whites across the world continue to drop, in Geordie folk memory – passed on from father to son, grandmother to granddaughter, fan to fan – there is still the recollection of the day they switched on the TV to watch the evening news and learned that their team had just signed the world’s most expensive player. 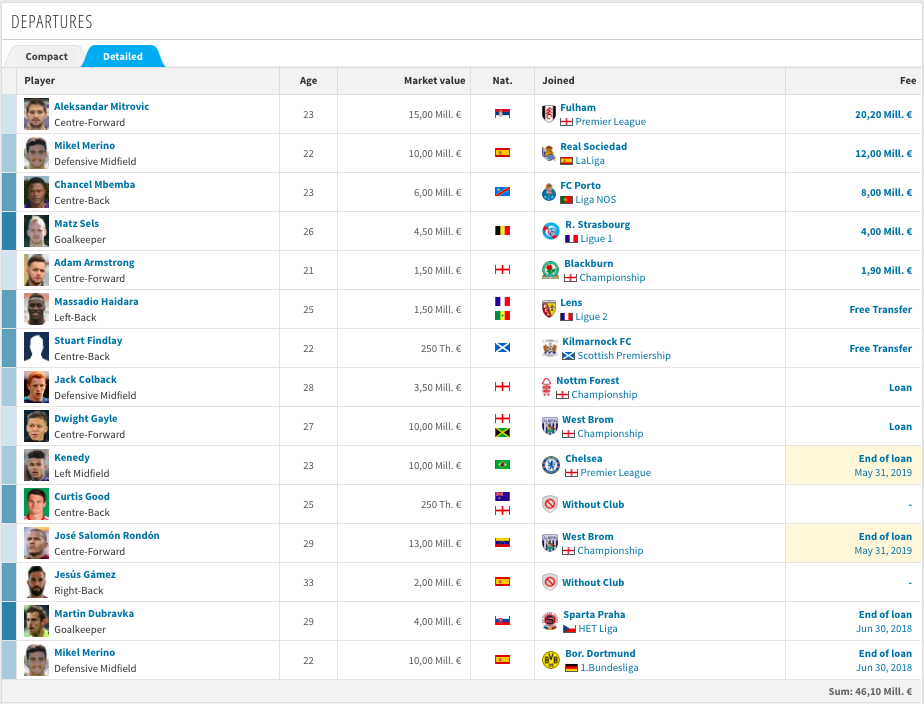 Colombia and Football: A Matter of Life and Death

Colombia and Football: A Matter of Life and Death?

Transfer ins and outs via Transfermarkt