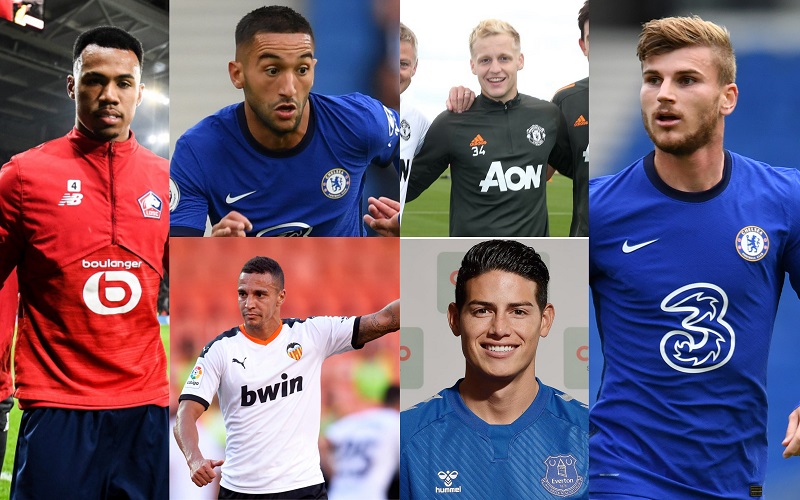 Just 48 days after the 2019/20 Premier League season was completed, we are all back and ready for another exciting season of football ahead. Traditionally, by the second week of September, we would be a few weeks into the season, and things would be shaping up nicely. However, there has been nothing normal about 2020, and fans will be hoping for a football season with no interruptions. Just with any other summer, several clubs have made significant moves in the transfer market, and in this article, we will go through some of the signings to look out for –

This was one of the signings that was completed well ahead of the summer. There have been rumours about the Moroccan playmaker leaving Ajax for a while and finally, he has made a move, and it is to Stamford Bridge. Chelsea are building an exciting, young team under Frank Lampard and Ziyech could prove to be an astute addition. Following the departures of Willian and Pedro, Chelsea needed some creativity and goals, and Ziyech will be key in providing that. Ziyech is more of a wide-playmaker than a traditional winger, and he will thrive with the likes of Timo Werner, Tammy Abraham and Christian Pulisic making off the ball runs. With the quality he has at his disposal, there is no doubt he can make the difference. However, just as it is with any signing, it certainly will be interesting to see if he is able to show his quality in a new league from the get-go.

Now, this certainly was a signing that made people turn their heads. Everton, under their current ownership, have not been afraid to splash the cash but so far, they have not been hugely successful. Several managers have been at Goodison Park in the last few years but no one has been able to deliver consistent European football before they even think about moving on to the next step with the Champion League. In Carlo Ancelotti, they have a serial winner, and the effect of having such a manager is seen in terms of attracting a player like James to the club. James did not have a great relationship with Zinedine Zidane, and after returning from his relatively successful loan at Bayern Munich, he did not have much impact at Madrid. This is an opportunity for him to show his undeniable quality in a team that will be built around him under a manager who trusts him. Let us say this is one to keep an eye out for.

ManchestercUnited are linked with a host of players every summer, and hardly any eventually turn out to be true. It was evident that Ole Gunnar Solsjkær wanted a midfielder with versatility and quality to challenge those at the club currently. Jack Grealish of Aston Villa and Donny Van De Beek were the names that popped up the most. Eventually, Manchester United completed the signing of the Dutch midfielder last week, and it is fair to say it is a very astute signing.

Van De Beek is a player who is best known for his versatility, and his quality on and off the ball means he proves to be a tremendous tactical weapon for coaches to use in different systems. He can play as an attacking number, or even as a deep-lying number 8. If United are to challenge on various fronts in this upcoming season, Van De Beek will undoubtedly be a key component in enabling them to do so.

It took a small matter of 16 years, but Leeds United are finally back in the promised land. By the looks of it, they are making sure they do everything possible to give themselves the best opportunity to ensure that they are in this for the long haul. Leeds have made several major signings so far, but it is without a doubt that the signing of Spanish forward Rodrigo from Valencia is their high-profile acquisition of the summer. Signed for a club-record fee, Rodrigo, who is part of the Spanish national side, has a growing reputation, and his style of play suits what Marcelo Bielsa wants. While he needs to contribute with goals, it is his other qualities that would have convinced Bielsa and Leeds to make a move for him. His ability to link play, provide an option for the midfielders and create chances for those around him is what Bielsa will hope to see him do and he will be one of the players who will be vital for Leeds having a good season.

Arsenal are a club that is looking to rebuild under Mikel Arteta and the early signings are undoubtedly positive. They managed to win the FA Cup beating Manchester City and Chelsea in the semi-final and final respectively. That, along with their two wins against Liverpool either side of their FA Cup success in the league and Community Shield will provide them with confidence heading into the new campaign. The signing of Brazilian central-defender Gabriel from Lille is a signing that could take Arsenal to the next stage of evolution. In the big games so far, Arsenal have tended to play on the counter-attack and have not been the team that are the protagonists. If Arsenal are to take that next step, Arteta needs players that he trusts and players who have the technical and physical quality to play the way he wants. Gabriel had an impressive few years at Lille. At the age of 22, he still has a lot to learn and will develop, but it will be interesting to see how he forms a partnership with the likes of David Luiz and William Saliba, amongst others. He might need a bit of time to settle in and show his true potential.

Chelsea depended on Tammy Abraham, who had just played one season of Premier League football with Swansea City, and Olivier Giroud, who could not be relied upon over a long season, as the main options to provide goals, heading into last season. It was not surprising when Lampard identified that he wanted to bring in a true goalscorer into the side, and Timo Werner with his release clause proved to be a very viable option. The German has developed wonderfully at RB Leipzig and proved to be one of the leading scorers in Europe in the last couple of seasons.

It will be fascinating to see how Lampard uses him as Werner has often played in a system that employs two centre-forwards, and Chelsea under Lampard have often used a 4-3-3 or a 4-2-3-1. Werner could play off the left with Giroud or Abraham acting as the target man in a 4-3-3 or Lampard may choose to employ fellow countryman Kai Havertz as a second striker along with Werner in a hybrid 4-2-3-1 system. Werner is a player who thrives on playing on the counter-attack, but with Chelsea often dominating the ball in games, he will have to display other sides of his game to be just as effective too. But there is no question that Werner will add goals to this Chelsea side and is a very impressive addition who will provide different tactical options to Lampard as the season progresses.