Manchester United have had a decent pre-season in the United States by drawing their first two games, winning the International Champions Cup opener against AC Milan on a long-lasting penalty shoot-out and being humbled by Liverpool last night. The tour has given fans some positives and an insight for things to come. While all were ecstatic over the win against Milan, few might have noticed that Mourinho exactly new how he was going to set his team up against Milan, because he had already used it before, 8 years ago.

In the 2009/10 season, Jose managed Inter Milan and guided them towards a historic treble of the Serie A, Coppa Italia and the Champions League. In the previous season, Inter Milan had a star-studded squad which won him the Serie A. But, in the 2009/2010 season, the club had to go through a major reshuffle in midfield and attack. It was basically a brand-new midfield and attack. Stars like Figo, Vieira, Crespo, Adriano and Zlatan had all left the club which made Jose sign players which would clearly execute his ideology and tactics. He brought in Thiago Motta, Diego Milito, Pandev, Dacourt, Quaresma, Sneijder and swapped Zlatan for Samuel Eto’o.

It was a brand-new squad excluding the defence. The Serie A is a slow and patient league which Jose knew about. He set his gameplay defensive and patient. His side focused more on his midfield alignment which won him most of his games. There wasn’t much width required in the Serie A during that time as all teams played narrow and attacked centrally. But that wasn’t the case in the Champions League, which was unpredictable and was dependent on wing play which caused Mourinho to switch his tactics. 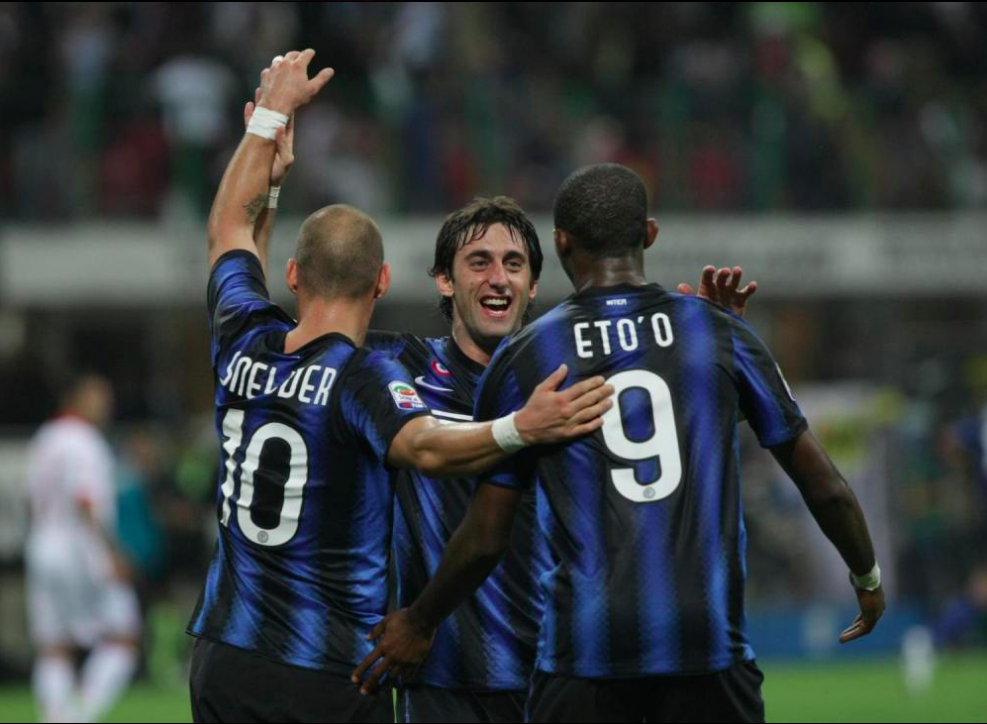 His side basically comprised of a different variation of the 4-3-1-2 formation which was midfield centric. He had Maicon as his first choice Right-Back, followed by Samuel and Lucio as his Centre-Backs and Chivu as his Left-Back. His midfield consisted of Zanetti and Cambiasso, who would play in the midfield more as the defensive midfielders with Thiago Motta as the central midfielder alongside Sneijder who would play the most pivotal role in the side playing as a number 6 and as a number 10 in the game in a more advanced role. Et’oo played as an auxiliary striker partnering with Milito.

Tactically, he changed the dimension of this formation which comprised of a classic Mourinho style defensive play comprising of surprise counter-attacks when the ball was in possession. As mentioned before, Mourinho’s Inter Milan side was highly dependant on the midfield. Maicon and Chivu would often try to push ahead trying to supply crosses. They were the team’s only wide men in a league where narrow gameplay prevailed. Zanetti was deployed as an anchor in midfield by Jose in spite of him being a defender.

Due to his age and Maicon’s pace, Mourinho found him useful in midfield due to his excellent passing and balling playing ability. He partnered up with Cambiasso, who too was deployed as a holding midfielder whose main role was to protect the centre-backs and defend in the centre of the pitch. Jose didn’t depend much on pressing his opponents and rarely did it. Ahead of Cambiasso and Zanetti was Thiago Motta, who also helped in defending but in more of a number 6 role. The main player in this Inter Milan set up was Wesley Sneijder.

The new signing was basically a replacement for the retired Luis Figo. Sneijder was one of the main attacking threats of the side but he too dropped down in support of the three midfielders behind him. He helped in defending and was the first person in the advanced role who’d initiate a counter attack with his technical ability and vision. He was all over the pitch and his runs would lead to Eto’o drifting wide towards the far post for a chance, but it was Milito who was the target man.

Milito, a new signing from Genoa was the club’s top scorer, scoring 22 goals in the Serie A and 30 goals in all competitions. Milito was the furthest man upfield waiting for a pass from his midfield. Eto’o, on paper, was listed as a striker but in the match, he was usually found on the Right-Wing, or an as auxiliary striker just behind Milito. 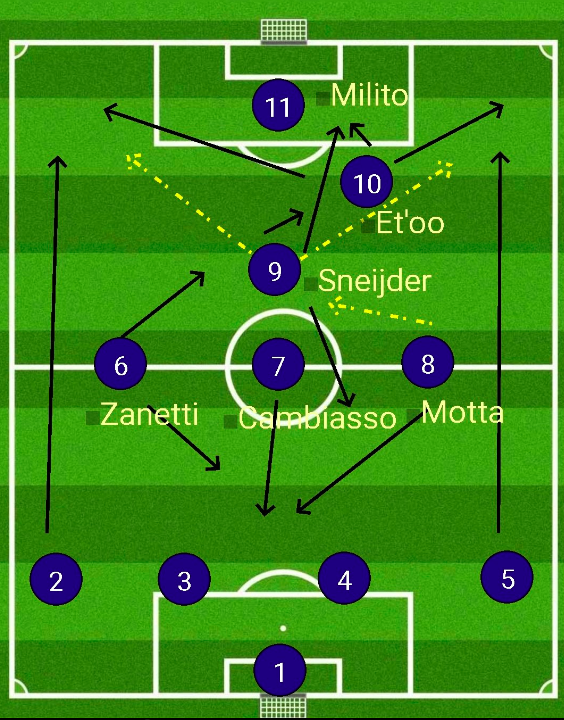 The midfielders defend deep and try to get the ball fast and then initiate a quick counter-attack. This set-up resulted in Inter-Milan winning the Serie A and the Coppa Italia. But things were different In the Champions League where the team reverted to the 4-2-3-1 as they needed more width. Sneijder scored 8 goals and assisted 15 in all competitions.

Mourinho used this similar set-up during the pre-season friendly against AC Milan. He used Lee Grant in goal with Valencia, Smalling, Bailly and Shaw in defence with Herrera, McTominay, Tuanzebe and Andreas in midfield with Mata and Sanchez as the strikers on paper. But, in the match, he started implementing his tactic. Both the Full-Backs started pushing ahead in attack during the game with an intent to supply crosses in the box. This resulted in Mata and Sanchez running around the wings and the centre to try and win the ball.

In midfield, Tuanzebe was listed as a holding midfielder but in the match, he played as a Centre-Back alongside Smalling and Bailly with Valencia and Shaw turning into Wing-Backs. Herrera, McTominay and Pereira were playing as a number 6 trying to win the ball in just ahead of the defence with Pereira using all his physical might to win the ball. He was also deployed more in the advanced attacking role, making runs and passing the ball to Mata and Sanchez. Mata played the role of what Eto’o played at Milan, running across the wings and supporting Sanchez, whereas Andreas played the role of Sneijder.

Sanchez’s goal was the perfect example of this set-up. Herrera, McTominay and Andreas defending deep. When United got possession, a chip from defence was headed out to McTominay who was in the middle of the pitch who headed it forward to Mata who flicked it to Sanchez who started running inside the penalty box when the counter-attack was started. Mata and Sanchez kept on exchanging roles which made it unpredictable for the AC Milan defence. 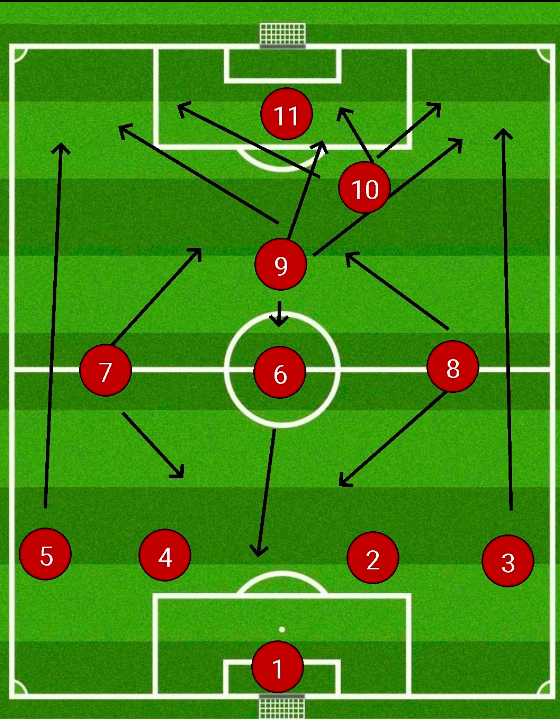 United don’t have their full main squad available right now, but Mourinho can implement this same set-up with his regular starters. In defence, Valencia, Bailly, Smalling and Young in defence with Matic, Pogba and Fred playing as the number 6’s with Matic supporting the defence. Fred, a physical player with great stamina and technical ability would be perfect to get the ball and start a counter-attack with Pogba taking the creative role along with getting the ball off the opposition. Andreas, Herrera, McTominay and Fellaini would be good backup options. Mata or Lingard playing in the number 10 role. Sanchez or Martial would fit into the auxiliary striker role and would often run around the wings with the Full-Backs supporting them. Lukaku and Rashford would easily fit in the striker role.

It would take time to implement this strategy and United would need to be highly dependent on wing play especially in the Premier League. With United looking to sign a new right winger, it would be a less possibility of this formation but, it should be given a chance. United should try it once with their main players. It has worked once before and Jose this season is on course to buy players that fit the formation with Fred. United still require a commanding Centre-Back, Left-Back and a natural number 10 to master this plan. Mourinho has won a treble with the 4-3-1-2 and it could be a game changer for the team’s objective of challenging for the title.

This article was first published on Supmanutd.blogspot.com on 28/07/18