Mo Salah has been a revelation since joining Liverpool last summer. The Egypt international moved to Anfield from AS Roma for £34 million and he has exceeded all expectations in his first season with the club, scoring 40 goals in 46 appearances in the famous red shirt. Salah was recently named Player of the Month for March – the fourth time he has won the award this season. With the possible exception of Manchester City’s Kevin de Bruyne, he has been THE standout player in the 2017/18 Premier League campaign.

Liverpool are currently third in the top-flight table but the omens look very positive indeed for Jurgen Klopp’s side ahead of next season. The Reds have an excellent record at Anfield, losing just one of their previous 29 fixtures on home soil and Salah’s form has been a key reason for their success. The Egyptian has scored 23 goals in front of the Anfield faithful this season and it wouldn’t be a huge surprise to see the Reds star notch a few more in the coming weeks. 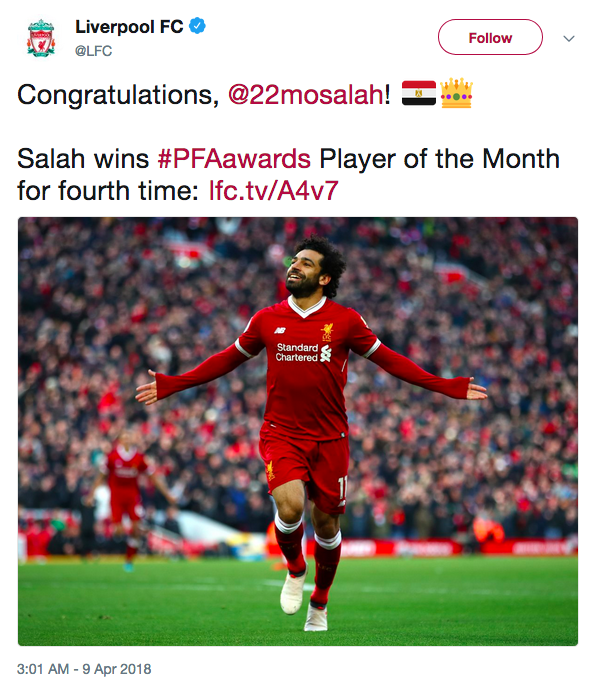 With a bit of luck, Salah could even fire Liverpool into second spot before the end of the current campaign. The Reds are just four points behind arch rivals Manchester United and it wouldn’t be a huge surprise to see Klopp’s men climb above Jose Mourinho’s side. William Hill have Liverpool at 14/1 in their ‘betting without Man City’ markets and Reds fans will be quietly confident of securing second place in the coming weeks. Watch this space; Salah and co. mean business.

The likes of Real Madrid and Barcelona have been linked with a move for Salah this summer but Liverpool will want to keep the Egypt forward at Anfield for the rest of his contract. With Salah playing alongside the likes of Roberto Firmino and Sadio Mane, the platform for future success is in place and Klopp’s men could challenge for silverware on a yearly basis. In terms of offensive talent, Liverpool are up there with the strongest teams in world football – they are an absolute joy to watch.

On current form, Salah is unstoppable and Reds fans will be hoping for more of the same in 2018/19. In terms of goal scoring, it is now a straight-up dogfight between the Liverpool man and Harry Kane for the Premier League Golden Boot award. As of April 9th, Salah has a five-goal lead at the top of the charts and it would be foolish to back against the Egypt star now. Kane has won the award in each of the last two years but this is Salah’s time to shine.
Barring any long-term setbacks, Salah looks primed for a successful career at Anfield. Reds fans have been blessed with some talented attacking options over the years but this front three is possibly the most gifted unit that Liverpool have had. Salah is the shining light of Klopp’s offensive juggernaut and that isn’t going to change this summer. Premier League glory is on the cards if Liverpool continue to play their exciting brand of football and Salah’s goals will give the Reds an edge over their title rivals.

Salah the King of Egypt