Sports as a field of art has been dominated mostly by heterosexual athletes across millennia. In the light of the stigma faced by the LGBT community, individuals affiliated with any and all sports more often than not choose to never come out as part of it. The same holds true for football. Professional footballers are reluctant to reveal their true sexual preferences fearing it might stir up controversy and end their professional careers. Olivier Giroud, in an interview, stated that’s it’s “impossible” to show homosexuality in the sport. While speaking about ex-Aston Villa midfielder Thomas Hitzlsperger – who came out as gay post-retirement – Giroud said, “This is when I told myself that it was impossible to display his homosexuality in football. In a changing room, there is a lot of testosterone, rooming together, collective showers … It’s tricky but it’s like that.”

Despite all this, one special American footballer who has been an icon of the LGBT community in world football is Megan Rapinoe. The US Women’s National Team forward disclosed her sexual identity in 2012 and has always voiced her support for the oppressed community. Rapinoe has also been a part of and been commemorated by several organisations including Gay, Lesbian & Straight Education Network (GLSEN), and Athlete Ally.

Rapinoe is no stranger to criticism, facing it more than ever when she decided to kneel during the national anthem before a friendly against the Netherlands, following in the footsteps of former NFL star Colin Kaepernick’s decision in 2016. Megan Rapinoe has been the face of controversy and has gone through extreme levels of backlash from audiences, but that hasn’t stopped her from taking a stand against evils in society. 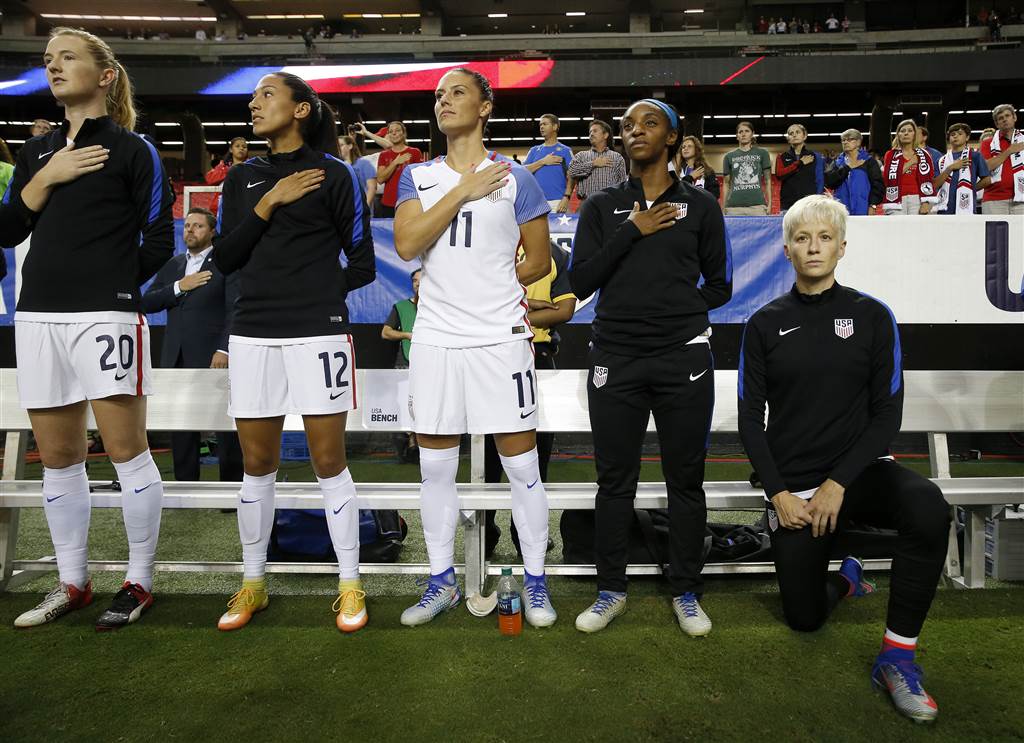 Why her? Because Rapinoe has been a victim of homophobia for the major part of her life and has always managed to emerge from the situation stronger than ever. However, after coming out as an openly gay sportswoman, she endured what was the toughest personal phase of her career.

Stemming from a significant amount of hatred she received as a lesbian soccer player, Rapinoe’s performance levels on the pitch dipped. She was not used to the scorn she had to face in other states, on the streets, and during matches. This was part of the reason why she moved to Olympique Lyonnais. Her life in France with Lyon helped improve her poor form, where she received the love she never thought she would.

In an interview in 2017, Rapinoe stated, “God forbid you be a gay woman and a person of color in the US.” The World Cup winner has spoken about social issues throughout her career and as a result of which she has received both criticism and the love and affection of fans. She has insisted that coming out honestly to the world is the biggest thing she’s done for herself, and it’s made her life better even though it took her some time to accept the hatred from some sections of the public.

Among everything else, she only made it a bit hard for herself when she kneeled during the national anthem. This was a cause of the chief backlash. To do it with her club, Seattle, was one thing, but to do it with her national team was quite simply another. While she was obviously put off by the blowout she received for it, what surprised her more was that there was a lot of quarrel surrounding it even post-election in the US.

Having taken her time to grow into her role as a social activist, Rapinoe believes that she needs to take more responsibility as a ‘World Champion’.

She started her football career 10 years ago as part of the Chicago Red Stars. She was the second overall pick in what was the first ever edition of Women’s Professional Soccer. There she had a stellar debut season, vindicated by her inclusion in the All-Star Team.

Her stint in the US seemed to not really work out after this. She played in 5 different teams in 3 years, two of which from the US, recording a mere 8 goals in 56 appearances. Things were, however, different with the national team. The forward represented the United States of America at the 2011 World Cup and ended the tournament with 1 goal and 3 assists. Her assist tally was the second highest in the tournament, only behind Marta Silva of Brazil. This enumeration of assists included her sublime cross against Brazil in the 122nd minute of their quarterfinal game, which was converted by Abby Wambach to tie the game 2-2 and take it to penalties.

Rapinoe was called up to the National Team for her second World Cup in 2015 having enjoyed a career revival at Lyon, where became the first American woman in history to play a Champions League final, which she eventually lost to Wolfsburg a goal to zero. The number 15 was put on magical displays at the World Cup finals, working her way from the flanks, getting past fullbacks with ease and putting in precise crosses for her captain Carli Lloyd and striker Alex Morgan to attack. Rapinoe played her best game against Australia in the tournament opener. She ended the game and tournament with 2 goals. She also provided two assists, one of which was in the final against Japan.

Naturally a winger by trait, Rapinoe can and has played several times in midfield throughout her career. She’s known for her pinpoint crossing and flair while dribbling. Regarded as possibly one of the best crossers ever to play the women’s game, she is also supplemented by her ambipedal qualities, and as a result, she can whip in a cross from either flank. It’s little wonder that she’s almost always in among the assists.

The veteran attacker has a tendency to drop deep till almost the halfway line to collect the ball and take it forward to attack. She takes responsibility during a game and creates space for herself on the wing and through the middle. Rapinoe has shown excellent off the ball movement throughout her career. This was more than evident when the USWNT faced Thailand in their World Cup opener. Kelley O’Hara started a counter-attack from near her box after breaking down an attack from the opposition. It was around this moment that Rapinoe starting running from deep in her own half and sprinted her way across the pitch. Substitute Mallory Pugh put in a through ball from the right flank which was faked by Morgan and tucked home by ‘Pinoe’ who was in the right place at the right time for USA’s 9th (!) goal of the game. Throughout the 90 minutes, Rapinoe showed astounding work ethic, dropping back to stop attacks and then carrying the ball forward. This helped the defending champions earn a record-breaking 13-0 win in Reims.

Her excellent tactical and vocal command on the pitch has been recognised by her club, Seattle Reign. Rapinoe is the first choice captain of the club, which she joined in 2013. She is also their most influential player and has had the most say in the rebirth of the Washington based outfit. The American winger ended the 2013 season as the highest scorer of Seattle despite only playing for only six months. Despite netting in the Championship final against Kansas City, Rapinoe ended up on the losing side.

Rapinoe is an American Hero and deserves to be treated like one. Her involvement with the senior National team spans more than a decade, playing 154 games and scoring 45 times. Her history of dissent against the system in all forms – right from deciding to never sing the national anthem of the US again to starring on the cover of ESPN Magazine’s ‘The Body’ Issue with her partner Sue Bird – does in no way or form overlook her contributions to the sport. Megan Rapinoe will not only go down as one of the greatest players to play the sport but will also be remembered as one of the best ambassadors of the beautiful game.