Kylian Mbappé is fondly called Donatello by his French counterparts, not after the artist, but after a popular cartoon character. However, tonight in Kazan, the boy resembled a wild, fast and ferocious connoisseur of the arts, as he orchestrated the downfall of a team that hoped to rise above the ghosts of its past.

Both France and Argentina had made it to the knockout rounds, but their journeys told an entirely different story. While France had waltzed through the group stages, the South American team had a forgettable run, depending on chance and the unlikeliest of heroes to make it through. The French were in prime form, with most their players stepping up. On the other hand, Argentina were jaded throughout their tournament, with Messi looking on as his teammates struggled both on and off the ball. Despite being somewhat evenly matched on paper, the French went into this fixture as slight favourites and did not disappoint.

Didier Deschamps chose a 4-2-3-1 setup, with Olivier Giroud leading the attack, with the formidable trio of Mbappé, Griezmann and Matuidi behind him. The Albiceleste, on the other hand, chose to experiment with Messi playing as a false nine in a 4-3-3 formation, leaving both Higuain and Aguero on the bench for Angel Di Maria and Cristian Pavon.

The French set the ball rolling for a scrappy start, with plenty of nervy moments from both teams. The first big moment came in the 8th minute, with Griezmann’s 25-yard bullet Free Kick ricocheting off the crossbar, leaving the frame shuddering for a good 2 minutes after. The French didn’t have to wait for long, though. A cautious Argentinian attack came crumbling down as Mbappé latched on to a loose ball and raced down the field, choosing to settle matters with Armani all by himself. 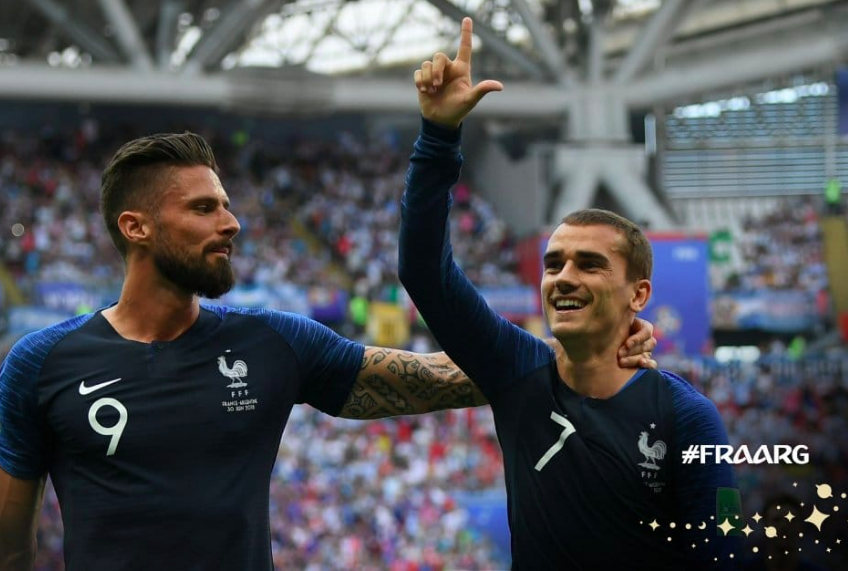 The Argentinian defence aged years in seconds as they ran after the runaway 20-year-old, with Marcus Rojo finally wrestling him to the ground in the penalty area, winning the French a penalty. Griezmann converted with an ice cold finish and topped it off with a cheekier celebration as he waggled his index finger and thumb at the Argentinian fans in his popular ‘take the L’ pose. The Argentinian response was somewhat subdued in the beginning, with the French capitalizing on the momentum. A marauding Mbappé didn’t do them any favours, either, with the wonderkid winning another free kick at the edge of the box in a similar fashion in the 20th minute. Pogba, however, skied it, much to the annoyance of his brothers in the crowd.

With every passing minute, the Argentine players clawed their way back. They were assisted by the lapse in communication between Griezmann and Giroud, who could have easily doubled the lead twice if they had been on the same page. Mascherano decided to take it upon himself to tip the balance, defending aggressively and attacking whenever possible. It was the holding midfielder’s best 45 minutes in a long time. Messi finally started seeing more of the ball, but his best efforts were constantly thwarted by an omnipresent N’Golo Kante. Argentina needed a miracle, and it needed to come fast.

And it came in style in the 41st minute, from the unlikeliest of heroes: Angel Di Maria. The PSG player, who was experiencing a woeful first half, chose to take a shot from a ludicrous 30 yards from goal. One could almost see the vapour trail as the Telstar curled over the French defence, beat the French captain’s extended arm, and found its way to the back the net. As the referee blew signalling the end of the first half, Argentina were on equal terms with France, surviving on sheer pluck and adrenaline.

Argentina’s aggression continued into the second half, and it bore fruit in the 48th minute. A set piece placed the football in Messi’s vicinity, who struck it hard at goal. A wild Mercado deflection gave it all the finesse it needed, as it rolled into the French goal. It would be the latter’s goal, but Messi would not be complaining. Elsewhere, a distraught Didier Deschamps urged for calm, as Sampaoli grinned for the first time that night.

Sadly, that grin that would be short-lived. The night yearned for more drama, and it was going to get it. This time, it was from the competition’s youngest side. 22-year-old Benjamin Pavard wrote his way into history books with a sublime screamer a few yards out of the penalty box. This would be the first goal to be scored by a French defender in the World Cup since the exploits of Lilian Thuram against Croatia in 1998. The strike was reminiscent of Nacho’s stunner against Portugal, the only difference being this one went right into the top corner as opposed to Nacho’s drive which found the bottom corner of the net.

One game. Two contenders for Goal of the Tournament

Benjamin Pavard with the goal of the tournament so far!

Argentina were the oldest team in the knockout stages, and it started to show. As the French counterattacks became more spirited and potent, the men in the striped blue struggled to keep up. It was only poetic that the youngest on the field seal Argentina’s fate, and Mbappé did it in style, scoring a brace in a space of 5 minutes.

However, Les Bleus did not get ahead of themselves, and stood tall and strong, with a biting response to every Argentine attack. Aguero finally scored in stoppage time, but it was not enough to carry them through.

Messi and co. could only look desolate and disconsolate as the men in dark blue celebrated on the other end of the pitch. It is unfortunate that one of the greatest players the game had ever seen would go out without a world cup, but such is the beautiful irony of the game. And as one legend rode into the sunset, only time will tell if this World Cup classic witnessed the birth of another, one who was still in his teens.