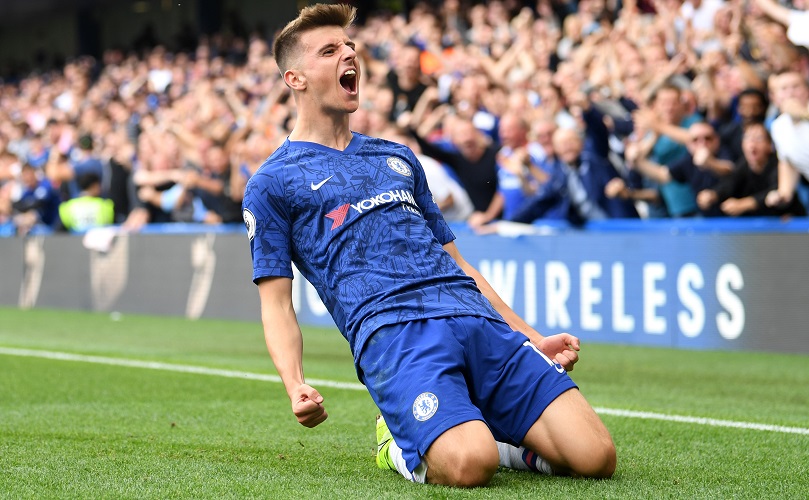 The appointment of Frank Lampard in the summer did not only bring Chelsea’s all-time leading goalscorer back to the Bridge but also Fikayo Tomori and Mason Mount to their parent club – both of whom were regular starters for Derby County in the Championship under Lampard. The addition of Mount to the squad was not foreseen by many of the Chelsea fans, as their midfield was already blessed with depth and experience. It was highly unlikely that he would start ahead of the likes of N’Golo Kante, Jorginho, Mateo Kovacic, Ruben Loftus-Cheek and Ross Barkley, or so we thought. Lampard fielded the young lad from Portsmouth regularly in pre-season, where he went on to bag 3 goals in 5 games. Many youngsters were used in the pre-season games as the manager rotated his squad to find his starting 11 for his first PL game in charge of the Blues at Old Trafford.

Ross Barkley looked like he had finally found himself again under Lampard as he scored four goals in pre-season. With Kante being fit enough only for the bench and an absence of wingers in the likes of Callum Hudson-Odoi and Willian, the former Evertonian found himself on the wings with Mount getting the nod at the number 10 role. At the end of the 90 minutes, it was everything but a dream debut for Lampard at the Theatre of Dreams. Mount’s first game was one to forget as the Blues were humbled. A faction of fans sympathized with the boss and his limited options on the bench, while the others were questioning the involvement of Mount whose abilities seemingly felt devoid of an end product.

The following Sunday, Lampard stunned the fans by starting him again versus Leicester City at the Bridge. The doubts were short-lived as the young Englishman pressed high up early in the first half to nick the ball off Wilfried Ndidi and slot the ball past Kasper Schmeichel with maturity in a thrilling 1-1 draw at Stamford Bridge. The manager had nothing but praise for Mount’s quality and work-rate throughout pre-season, and the youngster demonstrated both to full effect to give the Blues the lead. The 20-year-old could have doubled his tally later in the first half, but for Schmeichel’s quick handling of Mount’s close-range header. Mount scored in the very next game as well, this time away at Norwich City.

At the start of 2020, the Chelsea number 19 is the second-highest goalscorer for the club, five goals behind Tammy Abraham – who has racked up 13 goals since the start of the season. Mount has had a telling contribution in the side ever since his return from The Rams. He has made an appearance in every Premier League game of the season so far, either as a starter or as a substitute. His only exclusion from the matchday squad was the EFL Cup third-round tie against Grimsby Town.

Chelsea clinched their best away win under Lampard at the Molineux Stadium, where the attack-minded midfielder whizzed one past Rui Patricio in the dying embers of the match to help his side win 2-5. The game was singlehandedly won by the Chelsea Academy, as Tomori scored his first senior Chelsea goal with a screamer from outside the box. Abraham became the youngest player to score a Premier League Hattrick, only for six weeks, after which Christian Pulisic scored thrice away at Turf Moor.

Mount is a lean figure who looks stunted when seen beside Abraham. But looks are often deceiving; the 5’10” midfielder’s stature complements the physical and demanding style of the Premier League well. Although he doesn’t seem like a player who can call the shots in midfield, his presence makes sure that it does. He is equally good at using either of his feet and can play the long ball out from either flank if needed. Mount has played most of his football in central midfield and can pick a pass with his eyes closed.

Mount is a young and versatile lad equipped to play where he is told. He is highly creative up top behind the striker, so it comes as no surprise that he is stationed at the number 10 role by Lampard as opposed to his right-midfield position at Derby County. Playing as a right midfielder, Mount always made quick runs to find space between Harry Wilson and thread a pass out towards the wings or down to Martyn Waghorn.

But here at Chelsea, he is superseded by the more experienced lot in midfield. The recurring injury to Barkley has made life easy for the English international, who has claimed the number 10 spot for himself, promptly backed by the coach. Lampard’s previous experiences with the player have seemingly facilitated his inclusion in the Chelsea squad. The start of the season was shaky for the club – on account of a few injuries and the stinging transfer ban.

With Callum Hudson-Odoi injured, Pulisic’s recent arrival to the Premier League and two aging wingers in Pedro and Willian, Mount predominantly found himself on the wings. Although his work rate was the same, his output was affected due to the limitation in space. Down the middle, he is free to roam about both wings and press. But when limited to one side, he cannot commit to long-pressing runs without compromising his position at the wing. He has played more behind the striker than as a winger, as that is where he makes the best use of his output.

Lampard’s riches in central-midfield with the aforementioned stars means that he faces a dilemma in picking only 2 starting midfield options, with one on the bench. If and when he feels like the team needs to control the possession in a game, he sacrifices the wingers to give and extra midfield berth. Mount is inturn, pushed to the wings. Although Mount is technically sound for his age, he might need some time to understand the game from a winger’s perspective.

Influence on the team.

Mount has played every Premier League game this season for Chelsea – who have not lost a game in which he has either scored or assisted. Incidentally, they have lost both matches in which he failed to start. That is an incredible stat, especially for an academy graduate.

His prime skill is to press high to create a sense of urgency among the opposition defenders and in the flow of play, a skill, which he cannot exhibit similarly from his unnatural position in the wings. Mount’s particular skillset is complemented not only by his position but also by his teammates. He can play the intricate close-knitted passes with support from the midfield behind him. His presence in the midfield lets the deep-lying midfielder to slot in between the centre-backs, mainly as a third centre-back, and allow the full-backs to surge forward.

At the Emirates Stadium, Jorginho was brought on to have more possession and provide stability and a sense of connectivity by playing the ball from the back. This substitution pushed Mount out to the wing. However, after bringing on debutant Tariq Lamptey in the second half, Mount tucked in behind Abraham and started causing problems to the Arsenal defence. The number 19 also expertly curled in the ball which Jorginho put into the back of the net to spark the comeback and win the game by a score of 1-2. Although his goal contribution might not be persistent, his presence is always fruitful.

Mount has what it takes to become a starter for the club and potentially become the next big thing from the famed Chelsea Academy, but seems to struggle with inconsistent performances in terms of goal outputs. He has a manager who knows him and backs him unconditionally and with a fanbase that loves him – all signs of a future that is filled with success are there to be seen provided he gets stuck in and performs consistently for long periods of time.