You are here
Home > Player Profiles > [Interview] – “A football career is a marathon and not a sprint.” – 17 year old teen sensation Marco John is geared up for the challenges ahead 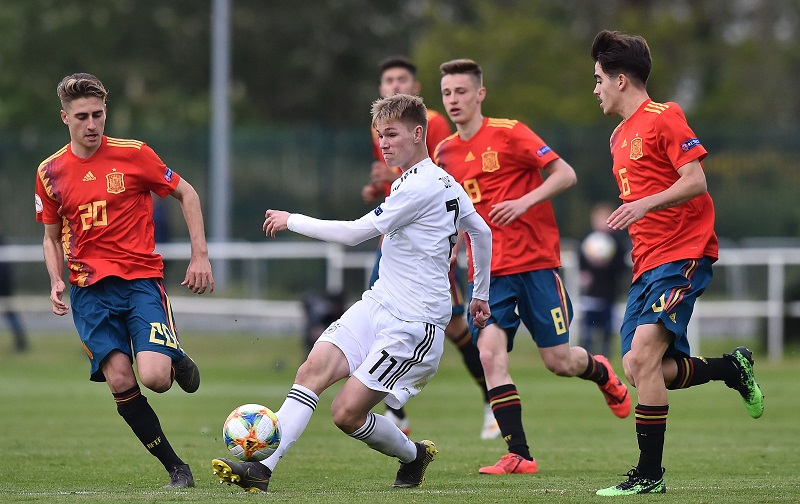 Ah, Germany! Forever, a hotbed for talented youngsters from across Europe to make a mark. Today, we speak to a 17-year-old Marco John. A forward-thinking midfielder who loves to operate in tight spaces and play those killers through balls, the German is fast making waves on Hoffenheim’s youth scene.

Marco started playing football like every other young boy in his community – just for fun and to while away time. As time progressed, he realized that he had talent and special skills on the ball. It wasn’t long before scouts from Germany’s big clubs took notice. In 2014, he was invited to a tournament where scouts from various Bundesliga clubs were present. TSG 1899 Hoffenheim were quick to move in and offered Marco a chance to train with the u-11s. That was an opportunity he was not going to let slip. He showcased his skill with a series of good performances and soon signed a youth contract with the club.

The young German has progressed through the ranks at Hoffenheim at breakneck speed, having represented all the youth teams before the age of 16 and cementing his place in the Hoffenheim u-19. His stock is rising fast and his consistent involvement with the German National youth teams is a testament to his abilities. As things stand, Marco is itching to break into the Hoffenheim first-team squad. We caught up with him to chat about his boyhood club, the journey so far, Germany and his plans for the future. The boy was very forthcoming and welcome. Here are some excerpts from the interview –

What made you choose Hoffenheim’s youth program?

It was the warmth and the family atmosphere. I knew that I will be well integrated but even as a young kid you don’t think much about it. I wanted to measure myself against the best players and that’s why I decided to join this beautiful club.

What is the sporting environment like at a youth setup of a big European club like Hoffenheim?

We have a really professional environment here. They take very good care of us and allow us to recover in the best ways after training. Our training ground is really innovative and full of cutting edge technology. The medical department is very meticulous and accurate which helps me to be on the top of my game.

Can you tell us a bit about the people who have had the most influence in your life growing up? If you could give us some instances or examples that would be great!

That’s simple, my Mum. She always supported me, drove me to the training ground from a young age and helped me a lot. She watched all my games and was always there for me. She has had a massive impact on who I am today.

How often do the first team coach/players interact with the youth squads and how beneficial is it for you?

Firstly, we have to show good performances. Young players like me get their chances to show their skills in first-team training. The interactions mostly happen with the head coaches and of course, I always learn when I’m able to train with the first team. It helps me challenge myself against professional players with top-level experience. Obviously, this is good for my game.

What’s the best piece of advice you have got?

Someone once told me that it’s important to try to be the best version of yourself and that’s every day. When it comes to sports it means you have to set your priorities. Work hard & never give up. Set goals for yourself and always trust the process. A football career is a marathon and not a sprint.

Do you model your game on any player or do you believe in creating your own niche?

I don’t have a real idol. Of course, my favourite player is Lionel Messi but if I have to compare myself to others then I would choose Kai Havertz & Kevin De Bruyne. I try to create my own way of playing but I often look up to Kevin De Bruyne to understand and learn from his decisions and movement.

How and to what extent is the competition for youth players to rise through the ranks overwhelming? How do you deal with the pressure?

The pressure is always there. I want to be a professional player so I have to deal with the pressure of always being analyzed and judged by coaches. It is important to always focus on your strengths. You have to play in your own way, in your own mode, that’s what makes you unstoppable.

Do you still pursue academics and if so, how do you balance it with your football career?

I’m going to school right now. The school cooperates with the club and provides the best conditions for me. However, I do have to catch up on the missed classes.

What gives you more joy, scoring a goal from distance or finding that perfectly weighted through ball for the striker/teammate to finish off?

I like to assist my teammates. I don’t need to be the player who’ scores a lot of goals. I want to play for the squad, create possibilities and play the perfect pass.

What would you say are your best attributes on the pitch? What kind of a player would you describe yourself as?

Like I said I would describe myself as Kai Havertz or Kevin De Bruyne. I’m not that good right now otherwise I would consistently play first-team football but I think I have similar traits to both of them.

Can you tell us how you felt when you got your first International call up? What were some of your key learnings while representing your country?

It’s an overwhelming feeling. I’m proud to be able to represent my country.  The games with the National team are always intensive and on another level. You have less time, less space and there is higher intensity. It is important to be mentally ready and fight hard.

Which current footballer do you enjoy watching the most and why?

Easy! Lionel Messi!. His vision, technique, finishing & dribbling is from another planet. It’s not comparable to any other player in this world. It’s just a pleasure to watch him play football.

Which football manager would you like to work under someday in the future and why?

Jürgen Klopp. His intensity and way to interact with players is something special.

What are your targets for the immediate future?

I believe I can break into the Hoffenheim first-team but I have to work hard consistently. I have to show good performances. My goal is to learn as much as possible in the training sessions.