Manchester City’s 6-1 drubbing of Huddersfield Town had a sense of déjà vu for the in-attendance goalscoring trio of Tony Adcock, Dave White and Paul Stewart, who had struck a treble apiece in a 10-1 rout against the Terriers in November 1987.

Pep Guardiola showcased his renowned tactical malleability as he fielded a 3-5-2 setup, with Riyad Mahrez, Kyle Walker and Raheem Sterling dropping to the bench for Gabriel Jesus, Vincent Kompany and David Silva.

With City being the highest represented club in Russia (16 players), the Spaniard is chopping and changing his lineups to avoid losing another key player of the ilk of Kevin De Bruyne, who was forced out of contention with a knee injury for three months.

The Etihad witnessed a truly heartwarming moment as David Silva entered the pitch with his five-month-old son, Mateo who was born prematurely in early 2018 and the reason for the midfielder missing 8 matches last season during a tumultuous personal period.

The Sky Blues squashed any pre-match qualms regarding a dip in performance after De Bruyne’s absence in devastating fashion, from the referee’s first whistle.

The “Silva-Silva” connection was starting to wreak havoc on the right-hand side as the senior of the duo was understandably playing with a point to prove with a series of twists, turns and swivels. With Bernardo Silva operating in an unfamiliar Right-Wing Back position, the Portuguese was engaging in sprawling one-two’s as the Spaniard was having a field day against Left-Back Chris Lowe.

In the 15th minute, David Silva carved out a golden opportunity for Gabriel Jesus who fluffed his lines instead of squaring the ball to a frustrated Aguero.

Huddersfield were on the backfoot from both flanks as the marauding Mendy’s tantalizing delivery was a constant nuisance for the backline, with Schindler and Kongolo’s last-ditch defending helping to keep the scores level.

City’s dominance was at its peak as the defending champions’ pass completion was an extraordinary 92% in comparison to the visitors’ lowly 51% and in the 25th minute, a major ode to Guardiola’s philosophy bore fruit as Ederson’s inch-perfect 86-yard kick out was met by Aguero who expertly dinked Phillip Billing after shot-stopper Hamer was caught in no man’s land.

The onslaught on offer from the hosts showed no signs of stopping with Mendy and Jesus’ electric link-up play on the left channel causing problems with the latter testing Hamer almost immediately after. 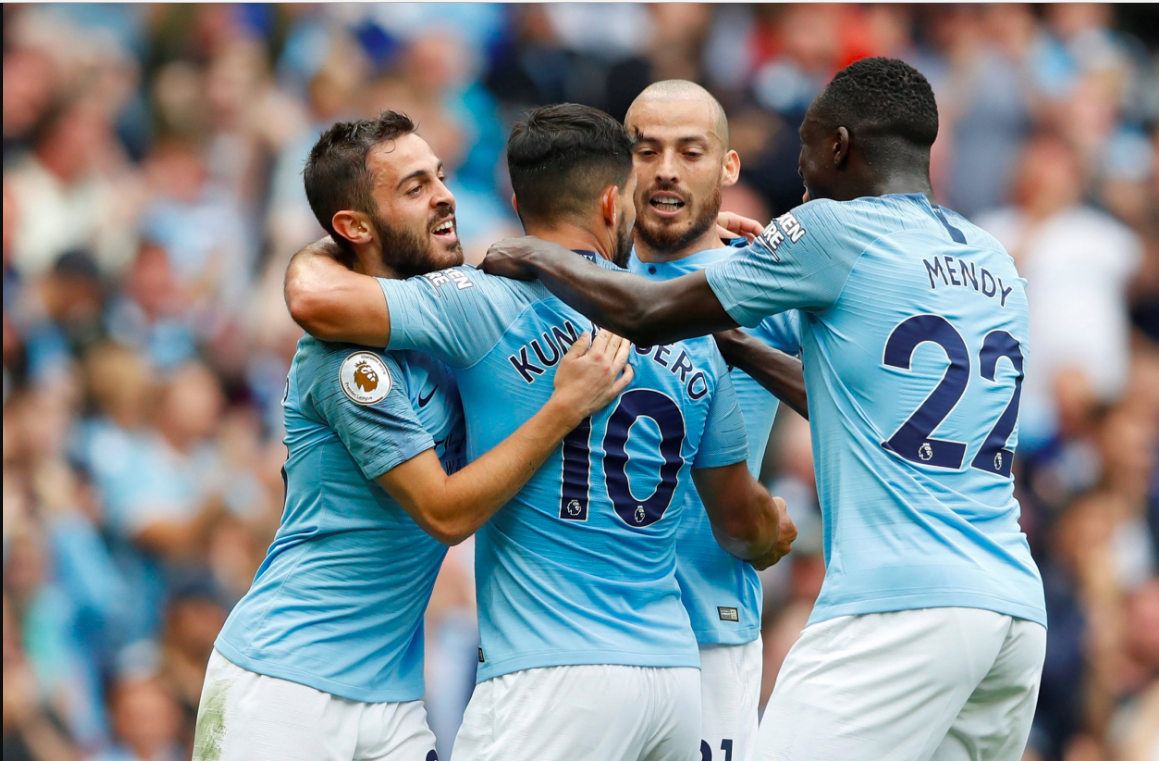 This burgeoning partnership struck gold as Mendy left Smith for dead with a cracking nutmeg and set Jesus up who doubled City’s lead in the 31st minute with a cracking drive from the edge of the box.

There was an inarguable gulf in class between the two sides and it was baffling to see Wagner’s gung-ho system in place with Wingers Hadergjonaj and Pritchard providing little to no defensive support to their Full-Backs.

Four minutes after Jesus’ strike, Mendy’s cross was spilt by Hamer and pounced upon by Aguero to complete his brace.

The Frenchman was at the forefront of the Citizens’ dominance, delivering a staggering 7 crosses in the first 45, showcasing how City are a league above with his presence.

As the tie was fizzling out to half time, Jon Stankovic pulled one back for Huddersfield, courtesy of suspect marking by John Stones to leave his marker free and take the shine off a terrific first-half display from City.

If the exemplary “All or Nothing” documentary is an indication of Guardiola’s strive for perfection, the 47-year old must have riled his side up with an animated team talk after Stones’ mishap at the back.

One man who was in no need of motivation was David Silva who scored the first freekick of his career in the 47th minute, capping off an unforgettable outing.

Guardiola paid tribute to the sentiment attached to the scorcher of a strike aptly,

“He scored an amazing goal for him (Mateo), who will never forget the first time he watched his father play football.”

The Jesus-Aguero pairing was a constant nuisance for David Wagner’s side, attempting 9 shots on goal in the first-half, three times Huddersfield’s entire tally. The dynamic duo continued to operate at their brilliant best in the second half, with the Brazilian playing with his back to goal superbly while the former Atletico Madrid marksman shrugged past the likes of Schindler and Stankovic to constantly test Hamer.

As Leroy Sane was stripped off and ready to replace Aguero, the Argentine cheekily flicked finished from a delightful Mendy cross to bag his 9th  Premier League hattrick (only 2 shy of Shearer’s record 11) and 146th goal in a City shirt, entering the top 10 highest goalscorers in Premier League history.

When a vast majority of strikers start to wane away as they reach 30 years of age, Aguero ages like wine and continues to remind detractors why he is possibly the best striker on the globe, when fit and firing.

The Sky Blues’ immense strength in depth was on show as Mahrez and Sane entered the proceedings and after easing their presence into the clash, the German whizzed past Schindler to trouble Hamer, only for the ball to ricochet off Kongolo and round off a resounding 6-1 victory for City.

Jurgen Klopp’s comments in relation to Manchester City marching on despite any injury woes rang true as the outright favourites justified their title with a perfection personified performance. No KDB, no problem.