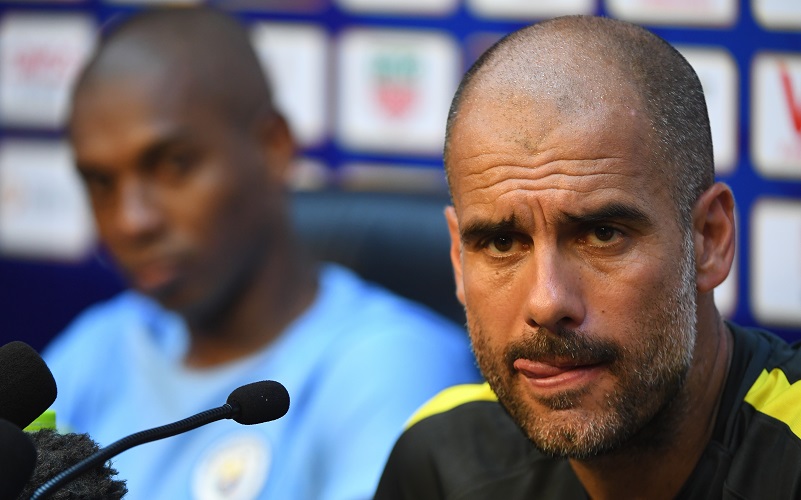 Manchester City’s modus operandi vis-a-vis their transfer business indicates that they have shot themselves in the foot, now more than ever. After losing Aymeric Laporte and John Stones to injury, the champions have been rattled, rather uncharacteristically for the first time in months.

They find themselves in a mini-crisis of sorts, with the absence of their defensive spine within the squad, the club will have to tap into their resources to be their best again. It has also subsequently raised a few eyebrows from City fans towards Pep Guardiola, who seemingly overlooked the possibility of needing a centre-back for a side looking to win all of the competitions they take part in. In fact, the disgruntlement among the masses symbolises their unprecedented strength in the English transfer market. Not only that, their injury woes are made out to be worse than they actually are.

The club had a massive task on their hands after the loss of Vincent Kompany to Anderlecht. The loss was not a mere exit for a normal player, Vincent Kompany is Manchester City and Manchester City is Vincent Kompany. The Belgian left the side lifting more trophies than any other City captain in existence, so it was pertinent to gather a replacement quickly. Not strictly in a defensive manner, but to recruit a player who could replicate his Manchester City legacy. Despite confirmed interest in Harry Maguire, the club seemed to stay put in terms of centre-back options and strengthened the nagging full-back and defensive-midfield positions instead.

The omission of any new centre-backs in the club also highlights the financial clout they have over their competitors in the Premier League, in a way, especially over rivals Manchester United. It was clear and obvious that Harry Maguire, an excellent ball-playing centre-back would thrive under the management of Pep Guardiola, but his refusal to acquire him has left fans befuddled. Pep recently stated in a press conference that they were unable to afford him, much to the amusement of rival fans, who believe that no player can ever be forfeited from City’s reach for financial reasons.

What was perhaps lost in translation was that the club would not bow down and bend over for Leicester City (or any other club, for the matter) and give in to their demands. They have made it their mission to establish themselves as the alpha, simultaneously stating that they could not be treated as pushovers. City’s brilliant execution of their principles means that they can still have the best squad in England with a record fee of £63.5m, leaving only Spurs with a lower record deal in the top six.

“We were interested, but we could not afford it. United afford it.” 💷

Their transfer policy meant that the club had to make do with what they had in their squad. Not exactly scraping the bottom of the barrel for the champions either, the sky blues realised in a 3-1 victory over Arsenal that they had a very capable replacement right under their nose, but more on that later.

It is a bit of an anomaly, considering that the club’s recruitment structure over the years has gathered a lot of acclaim, both in squad-building and the implementation of a business-minded direction in the club. If City feel the need to address a position, it comes to fruition quite swiftly without a lot of friction, making their recruitment structure one of the best in world football. This begs two questions:

Has the management failed to recognise the danger of missing an influential leader in Kompany and the potential threat of an injury to Aymeric Laporte?

Has the club missed a trick by not addressing this glaring issue that has now presented itself in a daunting manner?

In a word, no. It was and will always be unlikely to assume that a player in the squad is going to be injured for a long time. A point many fans argue at this situation of slight turmoil is that the club already has a senior centre-back less than what they had last season (4).

Especially after the disastrous showing over the weekend at Carrow Road, the residual defenders failed to leave a mark in the game which led to City’s first loss in over 200 days in the Premier League. In addition to that, John Stones’ seemingly repetitive habit of being deemed unfit is creeping up to Manchester City fans and adding fuel to the fire to a fanbase who have now become accustomed to success. His loss means that the club is without a centre-back pairing in an already challenging league, one in which competitors Liverpool are 5 points ahead at the top.

Contrary to popular belief, Fernandinho had already been implemented as a centre-back option back in June. His presence as a centre-back also facilitated the signings of Ilkay Gundogan (a four-year extension) and Rodri from Atletico Madrid. Both signings made for the holding midfield position should have been indicative of a vacated position in the #6 role.

It was quite unfortunate to lose out two central defenders in quick succession, but the truth is, City already had four centre-backs, to begin with in the new season, much like the previous season. His role would be akin to that of Javier Mascherano and Javi Martinez who blossomed into brilliant centre-backs for Pep Guardiola despite being defensive-midfielders by trade.

“I’ve been training in this position since the start of the season. Pep knows all about our squad and team. Today was my opportunity and I hope I can improve more.” – Fernandinho in the post-match interview after City beat Shakhtar Donetsk 0-3.

A professional and mature performance for City in the Champions League brought back the sense of calm and control you would normally associate with the champions. After a 3-2 loss to Norwich City, Fernandinho’s leadership and defensive nous would be a breath of fresh air to Pep and his side, a comfort in the coming months with the absence of their best defender Aymeric Laporte in mind. Hope still remains that the squad is more than capable of retaining the Premier League trophy and push for their first-ever Champions League triumph.

For cover, Guardiola confirms Rodri and Kyle Walker have been shortlisted to fill in for any mishaps in the central defensive positions. Academy players Taylor Harwood-Bellis and Eric Garcia could deputise, furthering City’s progress on all fronts as a club. Especially in a field where they have visibly faltered over the past few years, it would be a huge step in the right direction for the youth project for which the football group has invested heavily in.