Luis Alberto Suárez was born in the Uruguayan city of Salto. From a very young age, he was fixated with football. When Suárez was a kid, a car ran over his foot breaking the fifth metatarsal. In spite of the injury he kept on playing in the schoolyard, such was his love for football.

Luis Suárez learned to play football in the streets of Montevideo, Uruguay. His fearless approach and trickery made an impact at Nacional, the country’s biggest club. He was then spotted by the Dutch scouts who bought the star to Ajax. Later, he was lured to Merseyside where he terrorized defenses, making him an instant hero.

However, as they say, no one is perfect; there is a different side to Suárez. His temperamental issues lead to public conflicts with Patrice Evra and Branislav Ivanović. Later, during the World Cup, he bit Giorgio Chiellini which earned him a four-month ban. Not long after, he completed a move to Barcelona.

Suárez’s love life is a classic. He married the love of his childhood, Sofia, and has two children. They met through a mutual friend when Suárez was 15 and Sofia 13.

Sofi lived outside Montevideo, and Suárez used to ask Nacional’s club director, Wilson Perez for one euro so he could make a trip to Sofi’s place. He looked to earn money in every way so that he could visit Sofi, from selling Telephone cards to asking for unofficial match fees from Nacional directors. Sometimes he only had money to get there, hitchhiking on his way back.

Sofi later moved to Europe with her family to start a new life. Luis was devastated when he heard the news, he thought everything was falling apart again, his parents were separated, he left his childhood friends in El Salto, and now the love of his life was moving away.  However, with the help of his agent, Daniel Fonseca, Suárez was able to visit her. 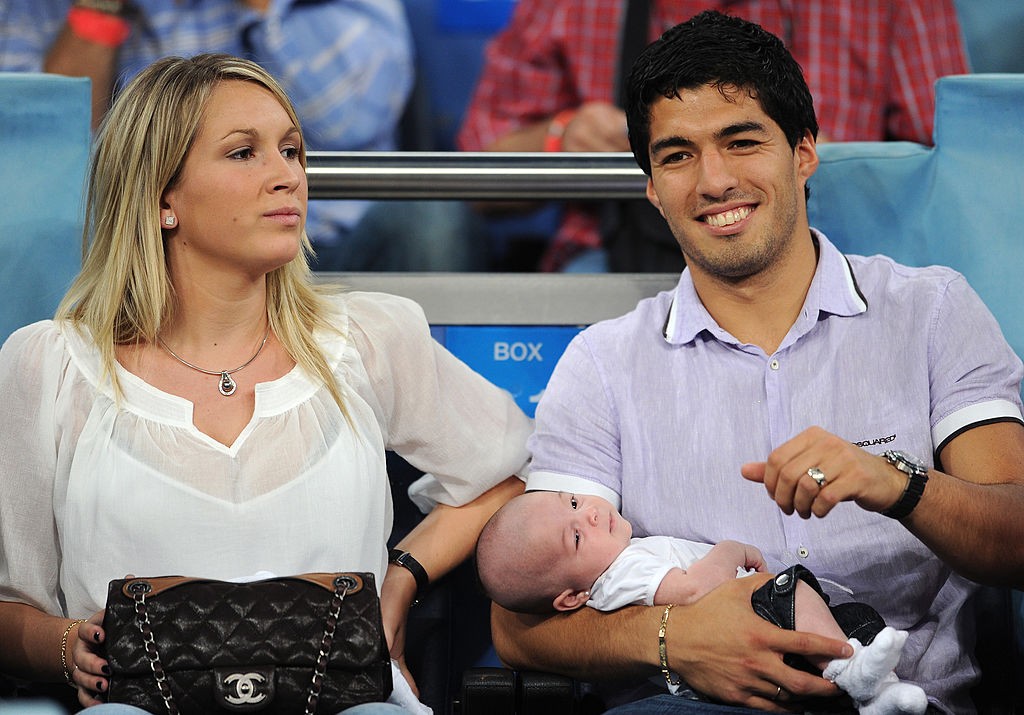 In the 2007-08 season, Suárez joined Ajax and immediately made an impact by scoring a goal on his Eredivisie debut. He then went on to form a deadly strike partnership with Klaas-Jan Huntelaar and scored 17 goals in 33 appearances, helping Ajax finish 2nd in the league.

The goals kept coming; he managed to bag 22 goals in the 2008-09 season. In the 2009-10 season, Martin Jol made him the captain. Suárez managed to score 49 goals in all competitions and by doing so was named Ajax Player of the year for the second season running and Dutch Footballer of the year.

As the transfer window opened, both Aston Villa and Tottenham Hotspur wanted to sign the prolific Uruguayan. Spurs got in touch with Ajax and offered £22million and were willing to meet Suárez’s salary demands. However, after Liverpool’s interest, he decided to sign for them. Many people at Ajax thought it was a downgrade for Suárez to sign for Liverpool as the club weren’t in the Champions League, and were struggling in the Premier League, but the history of the Reds lured him.

On 31st January, Suárez signed a deal with the Merseyside club worth €22.8million. He imagined a massive crowd at Anfield for his presentation, but sadly, no one turned up. Suárez was excited by the prospect of playing with Steven Gerrard and Fernando Torres. Unfortunately for him, Torres left the club. Luis moved into the Spaniard’s house, who helped him by introducing him to the neighbors.

The first time Suárez touched the ball at Anfield, he got tackled and lost the ball. In training, he was afraid of Martin Skrtel and Daniel Agger, both aggressive defenders. If he saw both of them on his side of the pitch, he would wander off to the other side.

Suárez could not shy away from challenges for too long, eventually clashing with Jamie Carragher. The Englishman used to tackle Suárez hard during training, leaving him with the thought of getting injured. Suárez later described ‘Carra’ as ‘the typical tough, aggressive defender.’

Early on his career in England, he earned the reputation of being a diver. He was shown twenty yellow cards out of which fifteen were for protesting to the referee, and another two for simulation.

In his first half-season, he scored four goals in 13 games. After the season, Suárez went on international duty with Uruguay and won the Player of the Tournament at the 2011 edition of Copa América. By doing so, he helped Uruguay clinch their 15th title.

Suárez had a disappointing start in the 2011-12 season. Liverpool was constantly losing games, and he was unable to perform well. At the end of a below-par season he did, however, win a cup after Liverpool beat Cardiff City on penalties.

In his autobiography ‘Crossing the line’, Suárez accepts that he did use the word ‘negro’ in an argument that took place in Spanish with Patrice Evra, but he also clears that the word has a different meaning in Spanish and changed meaning in the English language. In Spanish, the word ‘negro’ means black and nothing else. Suárez also said that it is not considered as an insult to say ‘negro’ in the Spanish language.

According to Suárez, the complete phrase that he said was ‘Por que, negro?‘ which means why are you complaining about foul but people interpreted as ‘Porque eres negro’ which changes the meaning to ‘because you are black.’ However, the court didn’t buy Suárez’s story and handed him an eight-match ban and a £40,000 fine. The people at Liverpool were behind Suárez, and the players wore shirts with Suárez written on their backs.

In February 2012, during the handshake, before the United-Liverpool game began, it looked like Suárez didn’t want to shake Evra’s hand, but Luis has a different story to it. He says ‘he had every intention of shaking Evra’s hand,’ but as he was walking down the line, Evra lowered his hand away from Suárez, so the latter also decided that he was not going to shake his hand. Suárez also says that once he passed Evra, the latter started to protest and grabbed my arm, which once again made him the villain.

Following Kenny Dalglish’s departure, Brendan Rodgers’s arrival had an immediate impact on Suárez. He had a conversation with him and made him realize that he will play the squad to his strength. Liverpool’s direct, physical approach would be switched out for a possession-based game, representing a bit of Spanish Football.

In Suárez’s book, he reveals various methods adopted by Rodgers to motivate the squad, including asking the players’ mothers to write a message for them, which he read out before the team headed to the tunnel for the game. But there was a trick – he didn’t disclose the name of the sender. For instance, Suárez’s mother wrote, ‘You can now find Liverpool shirts in every house in Uruguay.’ This was enough to motivate the striker.

The work Rodgers did at Liverpool was good; however, the results didn’t favour him, Liverpool lost 3-0 to West Brom on the first day, followed by a 2-2 draw against Manchester City and a 2-0 defeat against Arsenal. Rodgers knew he needed recruitments in the winter transfer window and bought in two new faces, Philippe Coutinho and Daniel Sturridge.

‘Together, you and I can do something big here.’ This was the first thing Sturridge told Suárez upon his arrival in the January 2012 window. The latter was surprised. Changes were required if the two were to play together, and Rodgers made the needed changes. He shifted Suárez, first to the wings and then into the number 10 position to great effect, as both started banging in the goals.

By the end of the 2012/13 season, Suárez scored 23 league goals despite missing the last five games because of the ban he received for biting Branislav Ivanović. Sturridge also chipped in with 11 goals in just half a season. 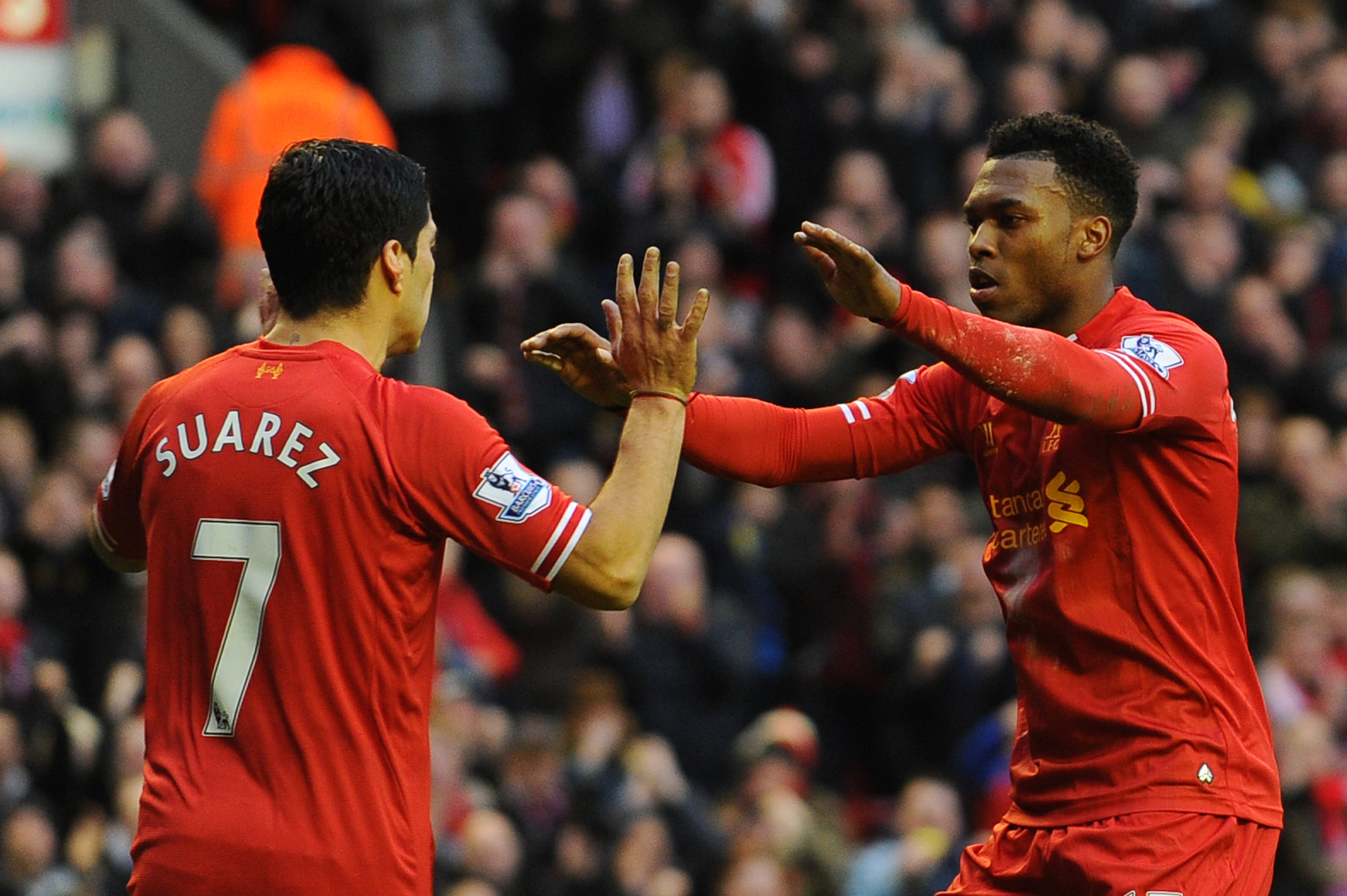 Suárez says that both he and Sturridge never talked about who had more goals. It’s not like they didn’t like scoring, but they weren’t obsessed with becoming the top goalscorer. The partnership between the pair turned out to be so good that they were dubbed ‘SAS’, in a throwback to another iconic Premier League partnership, that of Alan Shearer and Chris Sutton.

SO CLOSE YET SO FAR

After the 2012-13 season, Suárez wanted to leave Liverpool and England because of the criticism he received. He thought of leaving the country and starting a new life in a different country or city. He also had a clause in his contract, which stated that if Liverpool finished outside Top 4, he could leave the club given that the transfer fee exceeded €40million. Arsenal infamously triggered that release clause, by going a euro over.

Suárez thought about leaving Liverpool for Arsenal but later stayed as Steven Gerrard convinced him. Gerrard told Suárez to play one more season at Anfield, and if he performs well, a big club will come for him in the transfer window.

The 2013-14 season was a roller coaster ride for Liverpool. 9 wins on the trot following the turn of the year saw them surge to the top of the table. On 13th April, following Liverpool’s win over defeated Manchester City, Suárez saw tears welling up in Gerrard’s eyes. With only four games to go, everyone at Liverpool started believing that this could be their year.

With 3 games to go, Liverpool were set to face Chelsea at home, sitting pretty at the top of the table. However, Suárez and co’s dreams turned into a nightmare, as Demba Ba scored past Mignolet just before half time to put the Blues ahead, following Gerrard’s infamous slip. In the second half, Liverpool tried everything in their power to win, but they were blown away by a José Mourinho masterclass.

Suárez knew that if both Liverpool and Manchester City win their remaining games, the title will go to the latter courtesy of their superior goal difference. 3-0 up against Crystal Palace in their next game, Luis ran to the net and was desperate to restart the game after scoring the 3rd goal, thinking they could catch up with the goal difference. However, following Liverpool’s remarkable capitulation, the score ended 3-3. Suárez couldn’t control his tears and had to be escorted off the pitch by Kolo Toure.

Suárez won a lot of individual awards that season including the Premier League Golden Boot and Player of the Season but he missed out on the league title.

On 11th July 2014, Suárez signed for Barcelona, thus bringing an end to his astonishing career at the Merseyside.