The Premier League serves up an early season title six-pointer right before the international break when Liverpool host Manchester City. A modern classic, this encounter has the added weight of deciding who goes into the break with the momentum. United are struggling, Spurs are patchy and Arsenal a work in progress, but with Chelsea hot on the heels of the table toppers, neither side can afford a slip-up.

After flexing their financial muscle in the summer in a bid to close the gap at the top, Liverpool were the side earmarked by most to provide any semblance of a challenge to Manchester City after they blew everyone away last year. So far, the Reds have fit the bill. Their last-gasp draw at Stamford Bridge last week was the first time they dropped points this season. Since then, however, they have been guilty of a poor display at Napoli in midweek, where they failed to muster a shot on target in the 1-0 loss. Vulnerable as they are, Liverpool’s home turf provides the perfect venue for them to bounce back.

City’s travel sickness at Anfield is well-documented – with no wins in the red half of Merseyside since 2003, this remains the only ground in the country where they are yet to record a League win since Sheikh Mansour’s takeover in 2008. This run extends to Guardiola’s time in England, where he’s tasted defeat in all three of his visits to the iconic stadium.

The hosts can take further encouragement from Jürgen Klopp’s record against Pep Guardiola, an area in which he far exceeds other managers.

Winning Sunday’s battle would be a big step towards winning the war for Klopp, something he hasn’t quite been able to do against Pep.

The Champions, however, have more than enough reasons to be confident of getting a result at Anfield for only the second time in the Premier League era. Guardiola teased the return of Benjamin Mendy and Kevin de Bruyne, who returned to training this week. With Fabian Delph out and İlkay Gündoğan injured in midweek, de Bruyne and Mendy’s fitness tests will have even more riding on them than usual.

Another area of the pitch where City have a clear edge over the red rivals is, surprisingly, the attack. The Sané-Agüero-Sterling triumvirate has picked up where they left off last season. This is in stark comparison to Liverpool’s front three, who simply haven’t been on the same wavelength, except for the opening day thrashing of West Ham. Having been responsible for seven of Liverpool’s nine goals against City last season, Klopp will desperately hope Salah, Firmino and Mané rediscover their devastating form in front of goal.

Pep could perhaps turn to the Reds’ last two games for the key to shutting down their attack. Napoli and Chelsea managed to nullify Liverpool’s threat going forward by marking their front three out of the game, a job made easier in the absence of opposition runners from midfield. Naby Keïta continually broke between the lines in Naples in midweek before he was forced off with an injury. Whether he will play a part on Sunday remains to be seen.

Liverpool’s defence will also come under severe duress, despite the fact that they have kept eight consecutive clean sheets at home. Joe Gomez seems to be relishing his run in the first XI as Virgil van Dijk’s partner.

18 goals in 4 meetings last season provides more indication, if at all it was needed, that the stage is set for another cracker in what is growing into a fierce modern-day rivalry. The two managers may belong to a mutual admiration society, but all would be forgotten for 90 minutes on Sunday. While Klopp insists that it is too early for a talk of a potential title challenge, the fact remains that he needs this more than his Catalan counterpart. Guardiola’s obsessive drive for success means that he sees it no differently.

Which is the best team in the land? City seek affirmation while Liverpool chase their aspiration. A statement of intent for Liverpool or a red-letter day for the Sky Blues? With these unstoppable forces headed on a collision course, a thriller awaits.

“Liverpool have won 12 and drawn five on home soil against Man City since losing 2-1 in May 2003, most recently winning 3-0 here in April’s Champions League quarter-final first leg.

The Citizens have already lost three times to the Reds in 2018 and risk losing four times to a single opponent in a calendar year for just the third time in their history, having also done so against Grimsby in 1936 and Tottenham Hotspur in 1993.

Last season’s two Premier League fixtures produced 12 goals in total, as the Reds followed up a 5-0 early-season defeat with that 4-3 triumph in the reverse fixture four months later.”

Read More | Liverpool’s Transfer Window – Is This Their Year? | 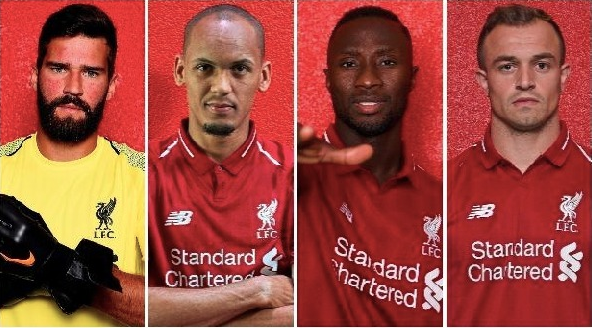